Philly's InterAct Theatre Company is finishing their 28th and most ambitious season presenting four productions of new plays. Artistic director Seth Rozin capping it off directing the premiere of The Three Christs of Manhattan, which he also wrote.

As if that wasn't enough to do, things also got unexpectedly hectic for Rozin when he was suddenly orchestrating InterAct's move from their longtime home to their new theater space, after he decided to leave their longtime home in the Adrienne Theater located near Rittenhouse Sq.

Interact will start their new season in October at the former ballroom and dance studio at the deco-era Drake Building in Center City. InterAct will establish a new theater collective and share the residency with fellow Philly companies, Simpatico Theatre Project, Azuka Theatre, Inis Nua Theatre and PlayPenn. 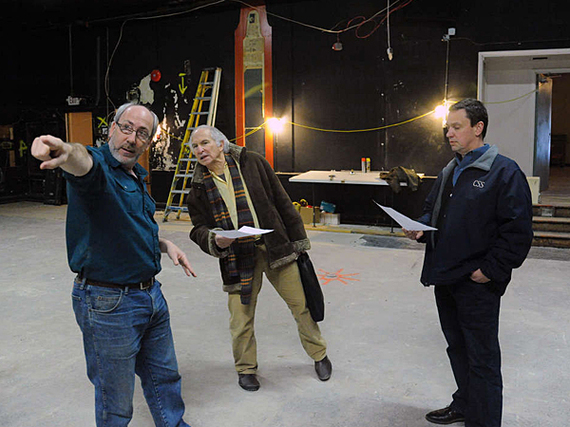 InterAct's hallmark is bold new voices in the theater, political plays and scripts with themes that address complex social issues. This season was exemplar of their brand this past year with premieres of Christopher Chen's 'Caught' a scalding satire about art and ethnography; Jen Silverman's 'The Dangerous House of Pretty Mbane' a drama about oppression and violence against lesbians in South Africa and Thomas Gibbons 'Uncanny Valley' (also directed by Rozin) about medical ethics and DNA - android cloning.

A week before the opening his play, the season closer, Rozin took five to talk about his play and the company's upcoming move.

"Yes, things did snowball a bit, "he laughed, "When we planned the current season last spring we didn't know we were going to be moving. I knew I would be directing two last plays, but I thought I would be available in the fall and winter for fundraising and other stuff." For the moment he is focused on his play.

The comedy concerns an atheist Jewish psychiatrist who is visited by three men, each believing himself to be Jesus Christ. Each one proceeds to make their case as the Messiah, while battling to save the Dr.'s soul.

Rozin explained that he was has "always been fascinated how religious text gets interpreted, appropriated, abused. And completely misrepresented and that led me that the three Christs in the play would have very different interpretations and would be battling it out. To win the psychiatrist's favor, which reflects where we are in the world," Rozin explained.

Over the three years, he took to write it, Rozin was also noticing the increased media attention on religion. "I was seeing, more and more, how pundits were pontificating about religion, this way and that, appropriating Christ's wisdom in their own way and asserting that others were interpreting it wrong."

Because of the themes, Rozin was not surprised that there was condemning mail already. ""We already got some yesterday, with the words 'be not deceived, God is not mocked, there is only one Messiah, one Christ' ... and it goes on from there. Some people who are very religious don't have any humor about it. But we're not expect that to be a primary response," Rozin assured.

He said this 28th season particularly connected with a wide cross-section of audiences. He had already been strategizing about how to form a Philly theater collective when the move became inevitable in the short term.

"I had already thinking about making it a hub for new plays at the Adrienne. But that plan didn't work out. So once we found the Drake, which had the potential for two theater spaces, we knew that from a business perspective as well as a spiritual and community perspective, we would be much stronger as a collaborative entity, than if it was just going to be InterAct moving to a new home theater," Rozin said. Highlighting its features of ballroom height ceilings, the 128 seat main stage theater and flexible 75-seat second stage.

"The four companies we're bringing in, will build a genuine spirit of collaboration whereby everybody benefits. Creatively and commercially," Rozin said. So far everything is on pace for the October opening, where theatre makers come to read, write, research, discuss, exchange, devise, rehearse and attend new plays. 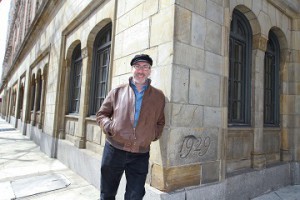 Director Rozin at the Drake earlier this year (courtesy InterAct)

"Aside for the scale and newness of it and we've never had to manage some of these things- from design decisions to hand driers in the bathroom- you know. The fundraising is beyond anything we've ever done. Everything is on pace for the Drake opening in October for InterAct's new era. assures, even though it seems, even for the always calm director, both "exciting and terrifying." Curtain up!

The Three Christs of Manhattan runs through June 21 at the Adrienne Theater 2030 Sansom St. Phila. For more information about the upcoming season at the Drake check www.interActTheatre.org | or call 215.568.8079