No matter what faith you belong, the Interfaith Christmas can offer everything you had always wanted and mor: to live in peace with fellow beings without feeling apprehension, discomfort or the fear of the other.

Christmas is about celebrating the birth of a man who taught us how to build a cohesive society, which he called the kingdom of heaven. Whether we are Christians, or even believe in God, it simply means building a society that is free from arrogance, hate, malice, prejudice and insecurities, firmly built with love and forgiveness, the panacea to the conflicts we face today. 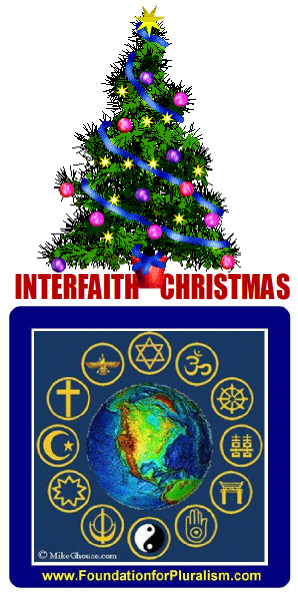 Love your neighbor means fighting the mean instincts in us to look down upon fellow humans and the uniqueness of their faith, culture, race, ethnicity or sexual orientation. A majority of Christians, like the majority of people in all faiths, get their religion right, and do not look down upon Islam, Judaism, Hinduism, Mormonism and others traditions as "cults" or an inferior belief or a practice; instead, they do the most difficult thing to do; to treat all the Children of God as equals in humility.

It is time for us to practice compassion, kindness, love and forgiveness towards each other, including those who do not get their religion right. That is the essence of the message of Jesus Christ and Christmas is about celebrating that message.

The powerful idea of forgiveness has given me everything I wanted: freedom. When my mother and my late wife passed away, we had the opportunity to clean each other's slates from anxiety, apprehension or discomfort and become free. Of course, that idea is in every religious tradition. Jainism calls it Michami Dukdam, the act of forgiving each other.

Who is not humiliated with rejection? As a child, parent, sibling, spouse, student or coworker, you might have experienced rejection, and it certainly is not a good feeling. It's a down spiral. But when you embrace the other, you have accepted him or her, or others have accepted you to be a part of the whole and interconnected, it restores the human spirit, which Rev. Moon called the divine principle. It amounts to honoring God who has created each one of us intentionally unique.

The man who taught this idea lived by example by embracing the lepers and socially rejected people of the time like prostitutes. A hug in spirit is an anecdote to rejection, and President Obama said it well, referring to the children in Newtown, Conn.: "Hug them tightly."

John 14:6: "I am the way and the truth and the life. No one comes to the Father except through me."

As a person committed to pluralism and interfaith attitudes, I deeply revere Jesus, and take him as my mentor, and consider him to be the first pluralist on earth. However, I read John 14:6 as an inclusive statement, rather than an exclusive claim, I see the largeness of his message. If we "follow him" and become like him, to be free from prejudice, to be free-from ill-will, to forgive and to love thy neighbor as yourselves, then that is a guaranteed path to living a life in heaven (peace) whether you are religious or not. Indeed, Lord Krishna says, "Surrender to me," and Allah says, "Submit to my will" -- and God wants his creation to remain intact in harmony and balance with all its components like a big web (Chief Seattle).

Each one of us follows the teachings of Jesus. I am not talking about the ritual and political Christianity, but the spiritual Christianity, which is boundary less and about freedom, and without the private club attitudes (Mark Siljander in the book, "A Deadly Misunderstanding") defining who is and who is not a Christian, Muslim, Jew, Hindu, Buddhist or other.

We may have to reflect and see if each one of has created God in our own image, either we limit him to our shell size and our ownership, or an universal God that is boundless, uncontainable, untamable and yet ours, yours and every one's.

Christmas is about celebrating the birth of Jesus who emphasized on those values that are dear to each one of us, regardless of our belief.

One of the most frequently used words during Christmas season is peace. Indeed, it is a reflection of the innermost desire within each one of us, whether we are Christians or not. Christmas is an annual milestone that intensifies the desire to have peace for oneself and for others.

Christmas evokes kindness, empathy and goodness toward fellow beings; it's a euphoric feeling of renewal that Jesus taught to the world, it is a sense of completion one feels when he or she finds in tune with humanity. Jesus showed the way by embracing the whole humanity regardless of who they were. Jesus is one of my mentors, and he is the first known pluralist on the earth. Christmas is a celebration of that refreshed feeling.

In the spirit of celebrating Christmas, I urge people of all faiths to reflect upon the message of Jesus Christ without the politics of Christianity. On this Christmas day, reach out to everyone.

As the Jewish Scriptures say, Ve'ahavta la'ger: You must love the stranger for that guaranteed happiness it generates. Jesus reached out to the ones who were abandoned by the society; Prophet Muhammad said, the least you can give to others is hope and a smile; the Hindu Scriptures want you to treat the whole world as one family; Buddha, the learned one, taught the joys of living for others.

The Sikh faith is indeed founded on the principle of caring for humanity; the Jains and Baha'i believe our joy comes from taking care of others. The Wicca, Native and earth-based traditions believe in taking care of what we see: life and the matter. I am particularly moved by His holiness Rev. Moon, who has built up a kingdom of goodness with a powerful mission of his work, living for the sake of others.

Jesus holds a special place in every one's heart, but particularly among Christians and Muslims, comprising over half the population of the world.

The Muslims call him Isa-Masih, the one who heals and one who brought life to the dead. The name of Jesus appears 27 times in Quran and one of the 114 Chapters is dedicated to Maryam, Mother Mary and the virgin birth. We may differ in what he means to us, but we respect him beyond our imagination. My faith is incomplete, if I don't believe in Jesus and the other prophets who came to bring goodness to us.

As a Muslim I will be celebrating Christmas, recommitting myself to listen to Jesus and follow his path of inclusiveness. And in my Islamic tradition, I will reflect on chapter 19 of Quran, dedicated to Maryam, Mother Mary, and pray on his birthday. I will pray that we all honor his message of creating peace and building cohesive societies where no one has to be apprehensive of the other. Amen!

My singular wish for this Christmas is to follow the path of Jesus. It means to make an effort to be like him, to be prejudice free; to be free from ill-will and malice, to forgive and embrace those whom we don't like. I wish us to be free from all biases. Amen!

As people of faith, we have to muster up courage to say, "My religion teaches humility to me, and humility builds bridges among people, and today, I seriously consider rejecting arrogance to claim my religion is the only right path. I understand, arrogance is the mother of all conflicts and assert that my religion works for me, just as other religions work for others."

Today, I pledge to release God from my cocoon and make him boundless. Will you do yours?