Jews are in mourning. They have been, at this time of year, for nearly 2000 years, and more. Every year they recall that their most sacred site, the Jerusalem Temple, was destroyed at this time. They mourn, sit to the ground, weep and pray for its rebuilding. They also pray for suffering to be removed, for their exile to end (partial fulfillment is not complete fulfillment) and for the Messiah to come. These are the core themes of Tisha B'Av, celebrated this coming Sunday. 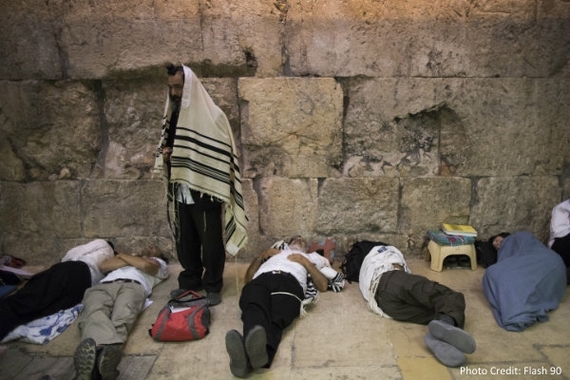 Jews have been powerless more or less for the entire period since the Jerusalem Temple was destroyed. They have lived as minorities, often persecuted minorities. While the Temple has not been rebuilt, they have come to power and a shift has occurred with the founding of the State of Israel in majority-minority relations. Jews are now a majority. What lessons have they, we, taken from exile, disempowerment and the pain associated with destruction of what is most sacred to us? This year, on Tisha B'Av, we should ask these questions and there may be some very concrete action to which we are called.

Sadly, in some sectors the memory of our suffering has led to hate and persecution of the other, rather than to a more empathetic position towards religious minorities. Over the past 4 years, 42 Churches, mosques and monasteries were vandalized, attacked or torched in the Holy Land. While only a very narrow section of the Orthodox Zionist world is responsible for these actions, they do raise the larger question of how we treat the religious other, how much space we give our religious minorities and what lessons has our own exile taught us with regard to the suffering of others and respect for their religious life.

Very recently, one of Israel's most celebrated churches, at the shores of the Sea of Galilee, the Tabgha Church, where the miracle of multiplication of fish and loaves is commemorated, was torched. Not only was the damage more extensive than any other instance of arson, it was also the first time that graffiti accompanying the act appealed to religious, rather than political, reasoning. Some Jews, in the name of their religion, set out to destroy the house of worship of another religion.

The pain and shame associated with burning a Church are all the more poignant when we recall the depth of the pain, commemorated annually, associated with the destruction of our own sacred space. One constructive response to this shame was an initiative, launched following the torching of the Tabgha Church. It was inspired by a teaching of the Hassidic master, Rabbi Nachman of Breslav - "If you believe you can spoil, believe you can also repair". Accordingly, a group of rabbis launched a campaign for rebuilding what arsonists had torched. If in the name of Judaism one could destroy, in the name of Judaism one should also rebuild. This simple recognition led to a crowdfunding initiative to rebuild what was destroyed in the fire. Significantly, the Church was not destroyed, but rather its courtyard, where Benedictine hospitality and interreligious encounters take place. Rebuilding what was destroyed is thus physically and symbolically rebuilding friendship. 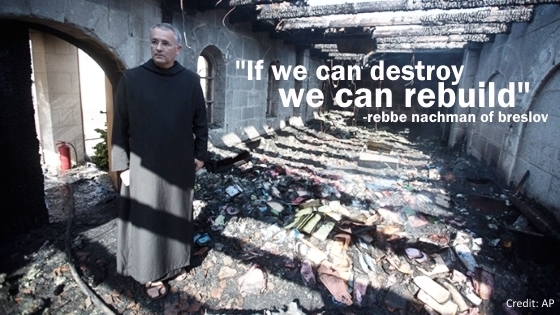 The initiative has been running for a month and will draw to a close a few days after Tisha B'Av. We are at a point at which we can draw significant lessons from it. We have seen that there is a broad sense of outrage and an outpouring of support for the initiative, cutting across most sectors of the Jewish world. It has opened up meaningful discussion concerning attitudes to Christianity and to religious minorities. Rabbinic leadership has played an important role in reaching out to the Jewish community at large and enabling the possibility of this important discussion. However, the support we have received has not only been limited to Rabbinic leadership and institutions, but it has been personal as well. This was possible because of the crowdfunding platform, which successfully reaches the individual, allowing him or her to find a voice, regardless of religious or denominational affiliation. And in addition to the Jewish community, the Christian community, locally and internationally, has been extremely receptive to the initiative, which has been seen as bringing healing to a wounded relationship.

All along, the initiative highlighted friendship and rebuilding friendship as its goal. As it draws to a close, and in light of the mourning associated with Tisha B'Av, we can introduce to it another level of significance. The Jewish and Rabbinic driven campaign to rebuild Tabgha is not only about restoring inter-group relations. It is about allowing our own deepest spiritual concerns and pains to shape our attitude to the other. We Jews, who continue to suffer until today, following the destruction of our Temple, must be supremely sensitive to the sanctity of all places of worship and of all religions. Some rabbinic authorities teach us that the Future Temple will be built by the generosity of unconditional love, repairing the hate that led to its destruction. Now we are invited to extend this love and the lessons of burnt houses of worship beyond Judaism, to all. In this spirit, we continue to pray for the rebuilding of the Temple.

For those who wish to learn more about the campaign and to support it, as it enters its final phase, please click here.