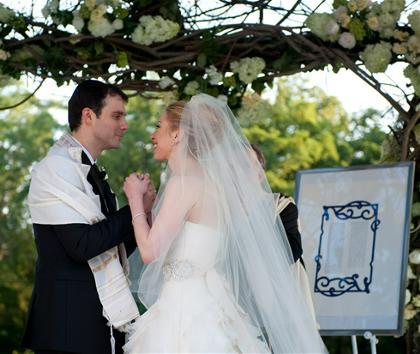 Recently I taught a group of engaged interfaith couples about the Jewish holidays. After the lecture, I changed the topic, turned the tables, and asked them a question--What's been the biggest interfaith challenge in your relationship so far?

These were all couples who were Jewish-Catholic. I expected some deep theological issues of concern like "What should we do about Jesus?" or "What happens when we die?"

It turned out the challenges were much more nitty-gritty. They usually had to do with the wedding.

One bride said their biggest argument was over the processional. She and her fiance were fighting over whether she should walk down the aisle with just her dad (the Catholic custom) or with both parents (the Jewish custom).

Another Catholic groom discussed a big argument over breaking the glass. This ancient custom happens at the end of the wedding. The bride's family believed it was the most important part of a Jewish wedding. He didn't see the point.

Another family was having a big argument over wine. The groom's family wanted two cups of wine at the ceremony, as per Jewish custom. The bride's family did not see the point, and thought it was a waste of time in already long wedding. "Wasn't one glass enough?" they asked.

How do deal with the tough questions

That is easier said than done. Finances and family histories come into play. Yet, here are a few questions to consider, and they can help in resolving arguments even if you are already married!

1. Why do I care so deeply about this issue? Getting to the why behind our concern helps us clarify what is important. In a recent wedding, the parents of the bride wanted to stand under the chuppah (Jewish wedding canopy). The groom's parents wanted to sit in the front row.

Both sides insisted their way was the right away. Ultimately, we realized the bride's parents wanted to be with their daughter and son-in-law to share in this sacred moment, while the groom's parents were afraid they might fall or pass out. We decided to have chairs up there in case any of the parents felt ill, and all four parents stood under the chuppah.

2. Am I involving too many people in this decision? Sometimes we can invite too many cooks into the kitchen. Some questions are best left to the bride and groom. If possible, keep the decision making circle small in order to preserve your sanity. If someone gets upset after the fact, you can ask for forgiveness.

3. Am I appreciating the emotions of the other side? It is difficult to win an argument about a marriage ceremony. When planning a wedding, we tend to default to emotion rather than reason. We may have a perfectly rational reason why a certain person's idea is wrong or unnecessary yet have no success in convincing them of such. Sometimes we need to let it go. Winning an argument is not worth losing a relationship. One of the ways we sustain a relationship is by constantly growing together. Here are the seven questions couples need to ask one another before they get married.