I had the opportunity to speak at a local NC college, The Art Institute, as a practitioner of Islam at a World Religions class. I was given a list of questions ahead of time to address. However, as soon as I opened the students began raising their hands eager with questions about the religion of Islam and its practice. As a Muslim, my interfaith experiences have opened my eyes to some of the misconceptions that exist about the faith. Through my experiences, I am finding the importance of interfaith dialogue in bridging the gap between the portrayal of Islam and reality. 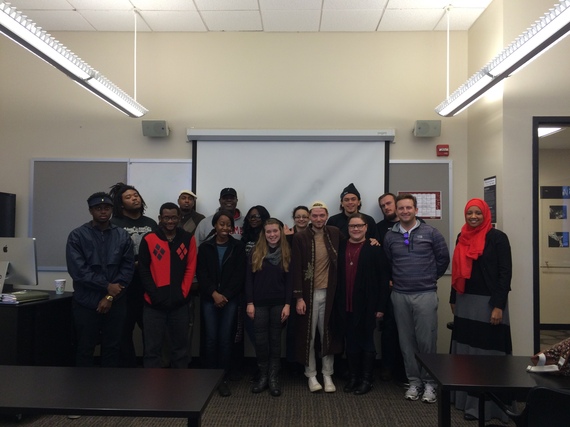 A student asked me to explain how Islam empowers me considering some portrayals of Muslim women as being oppressed. I shared ways Islam advocates for women's rights and their dignity.

As a Muslim woman, the Qur'an teaches me that I should seek knowledge, not just religious knowledge, but all knowledge. Like many Muslim women around the world, I have freely pursued higher education because it is not only a right, but also an obligation.

Also, the requirement for covering myself has taught me respect for my body and prevents me from being objectified. Covering is a display of modesty and a protection of that which is precious and deserves preserving.

Furthermore, Islam honors a woman's status, as women are not viewed as their husband's possession or a woman's possessions do not automatically transfer to her husband after marriage as it once was in some societies. For that reason, women in Islam maintain their maiden name after marriage.

We also discussed some of the similarities between Christianity and Islam. One of the misconceptions I have found in my interfaith discussions is the Muslim belief about Jesus. Muslims believe in Jesus as a beloved prophet and like Christianity we believe he was raised to the heavens and will descend during the time of the anti-Christ. We also believe that Jesus was born of the Virgin Mary. Highlighting shared beliefs is a way to eliminate the foreign concept of Islam.

Given the recent Paris attacks, we discussed ISIS and I found there is an inclination to understand this radicalized group in the confines of Islam. There was a question whether ISIS is a sect of Islam.

I am no expert on ISIS, but I found it difficult to explain ISIS in terms of a sect of the religion. When I think of sects, I think of groups that are spawn out of the minor differences between the varying schools of thought. However, I view ISIS as a group born out of socio-political corruption that justifies their radical behaviors with distorted meaning of religious text. The danger of referring to ISIS as a sect of Islam is it gives legitimacy to their motivations. It ties their actions to Islam when there is no place for it in Islamic teachings and further corrupts understanding of the religion.

With the rise of Islamophobia, interfaith work is more important than ever. It highlights areas of misunderstanding and gives the opportunity for people to hear about the religion from those living it daily. It breaks down those imposed barriers that exist on all sides. I recommended that for those who have questions about the faith to visit a local Masjid (Mosque) or engage a Muslim neighbor or co-worker.

There is no better way to understand a practice than to be surrounded by it. And likewise, I would encourage Muslims to take opportunities to speak to those of other faiths about Islam. To change the Muslim American narrative, we cannot leave education in the hands of those that are misinformed.