Co-authored by Michael Gerace, Re-Locate founder, and P. Joshua Griffin, doctoral candidate in anthropology at the University of Washington. 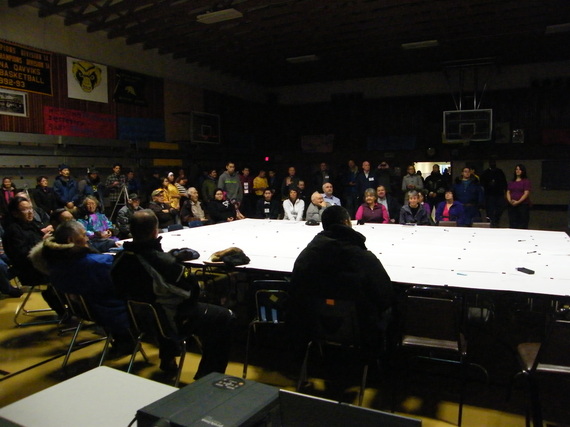 Last Monday morning in Iñupiaq Alaska, at Kivalina's McQueen School gymnasium, Secretary of the Interior Sally Jewell stood from her seat at a table surrounded by community elders, hunters and search and rescue volunteers.

"For the elders that are willing to open up," she gestured, "I'd be very interested in hearing about the changes you've seen on the landscape, how that's impacted your subsistence... [and] where you'd like to see things go for the future."

Those who gathered shared a wide range of climate concerns ranging from melting permafrost and unstable river travel to ocean acidification and disruption of critical migration routes. Community members talked about intense fall storms, which, because of the late-forming sea ice, have led to severe coastal erosion since 2004. Whaling captains alluded to the spiritual importance of the spring bowhead hunt, made difficult by unstable ice conditions in recent decades.

Jewell welcomed these observations of environmental change as helpful "to supplement the work that the scientists are doing," adding, "You are experiencing things here in Kivalina that we can learn from... so thank you for sharing this with me."

Yet, throughout the session, elders recounted far more than their observations of a changing landscape. They spoke of enduring more than one hundred years of state intervention -- ever since the federal government forced the semi-nomadic Kivalliñiġmiut nation to inhabit a barrier island at the edge of the Chukchi Sea now exposed to the impacts of climate change.

"The legislatures have failed to see this small community, because it's isolated," said Joe Swan Sr. of the Kivalina Relocation Planning Committee (KRPC).

"There's no place to build a house," Russell Adams Sr. told Jewell, "I've got how many families in my house now?...[S]o if you go back, tell your boss, 'you better hurry up.'"

Becky Norton, a member of the Kivalina IRA Council and KRPC added, "Keep in mind that pretty much each household... has 10-19 people... some in two-bedroom, three-bedroom [homes]."

Later on, Jewell conceded, "There's a lot of parts of my world that interact with you, the Bureau of Indian Affairs... an agency that has a history that's not always been welcomed here, and I understand why."

A community of over 420 people, Kivalina is widely known as a village "ravaged" by climate change. But efforts to move the village off the eroding barrier island have a long history in Kivalina. Just one year after the U.S. government constructed the first school on the island in 1905 -- thus establishing the contemporary village site -- a report to Congress found the school's location to have been "arbitrarily" selected. By the fall of 1910, residents "were beginning to talk of moving." The school teacher at the time agreed, writing "to move would be the wiser if not the safer plan."

In the decades that followed, residents deliberated village relocation prospects, initiating a formal process 34 years ago as a strategy to meet the village's "basic needs" for toilets, running water, adequate space for housing and equitable economic integration.

Rev. Enoch Adams Jr., KRPC Chairman, raised the issue of his organization's unanswered request seven years ago for an audit of "unsubstantiated" statements in an Army Corps of Engineers report that brought relocation plans to a standstill in 2006.

When faced with a question about setting funding aside for village relocation, Jewell replied that she was "trying to understand what the state's role is, what the federal government's role is, you know... is there a relocation plan... I can't answer your question because I don't know."

Throughout the dialogue, Jewell reiterated that she and the agencies she oversees have "much to learn" from Kivalina. This learning may include observations of a changing landscape, which Jewell hoped would "supplement" climate science, but it does not end there.

There is more for policy makers to learn from Kivalina than the important knowledge elders share about the effects of climate change on land, sea and animals. Negotiating the constraints of state-led relocation planning processes, community leaders have developed and are mobilizing a sophisticated and hyper-contemporary understanding of politics, economics and government at multiple scales.

Those planning to shape governmental responses to climate displacement should first turn to the experts who live not only at the frontlines of climate change, but at the eroding edge of governmental solutions. Kivalina leaders are composing self-organized institutions, new financial streams, media performances, legal interventions and global partnerships to expand the realm of the possible within the uncertainties of global change.

One such partner is Re-Locate, a collective of immersive ethnographic artists and transdisciplinary partners dedicated to understanding and supporting community-led relocation strategies and situational demands through a series of co-developed and co-administered projects that include:

● An autonomously operated, locally maintained and mobile biochar reactor sanitation system through a partnership with The Climate Foundation;

● A digital and physical archive of history and experience in Kivalina, annotated by community members, featuring especially the multimedia record of over thirty years of formal relocation planning;

● A Kivalina territorial master plan: an assemblage of encounters and conversation pieces that register, recognize and re-present decisions made by local institutions in Kivalina and community demands related to global climate change, governance and indigeneity;

● A series of physical and digital models and maps of Kivalina's territory to be annotated and augmented by community members, artists, and global partners during institutional, individual, and family conversations;

● Summits between Kivalina people, artists and guests from climate-displaced communities in Alaska and around the world at the Center for Kivalina Territorial Planning and Global Responsibility for Climate Displacement;

● An online and print publication, Re-Lo Magazine, featuring commentary from global theorists; the climate displaced; state, international and NGO representatives; and relocation practitioners from around the world; and

● Online participatory documentaries hosting interviews with residents and community-generated media about Kivalina's political history, its relationship to local and global agencies, Iñupiaq traditional knowledge and subsistence lifestyle and the witnessed effects of climate change on the island.

While culturally specific and situational, these projects also place the village's relocation efforts within global movements for climate justice and unheard of socioeconomic change. Kivalina's leaders have long recognized that relocation is not just about moving buildings and infrastructure away from climate dangers, but an opportunity to build worlds where particular living beings can endure and flourish.

Just as Secretary Jewell was to offer her concluding remarks, Richard Sage, a member of the Kivalina IRA Council, sparked a round of spontaneous applause with his comment: "Now, all that oil comes from this planet, and all over the world they're taking the oil out of the ground. Now you see all this global change, it's from taking the oil out, in my perspective. We need to stop that oil drilling... we can't just go buy another planet and move to it."