A memo obtained by the Huffington Post confirms that the White House and the pharmaceutical lobby secretly agreed to precisely the sort of wide-ranging deal that both parties have been denying over the past week.

The memo, which according to a knowledgeable health care lobbyist was prepared by a person directly involved in the negotiations, lists exactly what the White House gave up, and what it got in return.

It says the White House agreed to oppose any congressional efforts to use the government's leverage to bargain for lower drug prices or import drugs from Canada -- and also agreed not to pursue Medicare rebates or shift some drugs from Medicare Part B to Medicare Part D, which would cost Big Pharma billions in reduced reimbursements.

In exchange, the Pharmaceutical Researchers and Manufacturers Association (PhRMA) agreed to cut $80 billion in projected costs to taxpayers and senior citizens over ten years. Or, as the memo says: "Commitment of up to $80 billion, but not more than $80 billion." 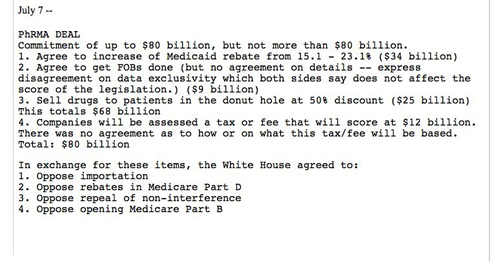 Representatives from both the White House and PhRMA, shown the outline, adamantly denied that it reflected reality. PhRMA senior vice president Ken Johnson said that the outline "is simply not accurate." "This memo isn't accurate and does not reflect the agreement with the drug companies," said White House spokesman Reid Cherlin.

Stories in the Los Angeles Times and the New York Times last week indicated that the administration was confirming that such a deal had been made.

Critics on Capitol Hill and online responded with outrage at the reports that Obama had gone behind their backs and sold the reform movement short. Furthermore, the deal seemed to be a betrayal of several promises made by then-Sen. Obama during the presidential campaign, among them that he would use the power of government to drive down the costs of drugs to Medicare and that negotiations would be conducted in the open.

And over the past several days, both the White House and PhRMA have offered a series of sometimes conflicting accounts of what happened in an attempt to walk back the story.

The White House meeting took place on July 7th, as first reported that evening in the Wall Street Journal. Also on the same day, a health care lobbyist following the talks was provided the outline of the deal by a person inside the negotiations. That outline had been floating around K Street before being obtained by the Huffington Post. In order to learn more about its origin, HuffPost agreed not to reveal the name of the lobbyist who originally received it.

The deal, as outlined in the memo:

2. Agree to get FOBs done (but no agreement on details -- express disagreement on data exclusivity which both sides say does not affect the score of the legislation.) ($9 billion)

4. Companies will be assessed a tax or fee that will score at $12 billion. There was no agreement as to how or on what this tax/fee will be based.

In exchange for these items, the White House agreed to:

"Non-interference" is the industry term for the status quo, in which government-driven price negotiations are barred. In other words, the government is "interfering" in the market if it negotiates lower prices. The ban on negotiating was led through Congress in 2003 by then-Rep. Billy Tauzin (R-La.), who is now the head of PhRMA.

The rebates reference is to Medicare overpayments Big Pharma managed to wrangle from the Republican Congress that Democrats are trying to recoup. The House bill would require Big Pharma to return some of that money. The rebate proposal would save $63 billion over ten years, according to the Congressional Budget Office. The White House, given the chance, declined to tell the Wall Street Journal for a July 17th article that it supported the effort to pursue the rebates.

The Medicare Part B item refers to "infusion drugs," which can be administered at home. If they fall under Part B, Big Pharma gets paid more than under Part D. The agreement would leave infusion drugs in Part B.

PhRMA's Johnson cast doubts on the provenance of the outline. "The memo, as described, is simply not accurate," he said in a statement. "Anyone could have written it. Unless it comes from our board of directors, it's not worth the paper it's written on. Clearly, someone is trying to short circuit our efforts to try and make health care reform a reality this year. That's not going to happen. Too much is at stake for both patients and the U.S. economy. Our new ads supporting health care reform are starting this week, and we are redoubling our efforts to drive awareness of why this issue is so important to America's future."

Johnson added that "no outside lobbyists -- not a single one -- were ever involved in our discussions with the Senate Finance Committee or the White House so someone is blowing smoke."

But the lobbyist who was given the outline defended its authenticity. And although the White House now says that drug price negotiations and reimportation were not actually discussed in the talks with PhRMA, the lobbyist said: "Well, that's bull -- that's baloney. That was part of the deal, for them not to push that."

The new uncertainty surrounding the deal comes after House Speaker Nancy Pelosi (D-Calif.) has repeatedly said that her chamber is not bound by any agreement it is not a party to. On July 8th, the day after the Journal reported some elements of the deal, Energy and Commerce Committee Chairman Henry Waxman (D-Calif.) said in a public speech that his committee would not be tied down by the agreement.

Before recess, he followed through. His committee passed a bill that allowed for re-importation and drug-price negotiations.

The health care lobbyist said that what deal still exists is uncertain, as a result of House pressure. "Now the White House is backing away from it, as you know, because of pressure from the House, because the House was not a party to the deal," he said. "The Speaker put enormous pressure on the White House, [saying], 'We weren't a party to it and we reserve the right to do whatever we want.' And which they did in the House Energy and Commerce Committee bill, which led the White House to say, 'Well, maybe it's not cast in concrete.'"

Obama is walking a tightrope here. He wants to keep PhRMA from opposing the bill, and benefits by having its support, which now includes a $150 million advertising campaign. That's a fortune in politics -- more than Republican presidential candidate John McCain spent on advertising during his entire campaign -- but it's loose change in the pharmaceutical business.

Opponents of the deal with PhRMA hope that Obama is playing a multilayered game, making a deal in order to keep the drug makers in his camp for now, but planning to double-cross them in the end if he needs to in order to pass his signature initiative.

Big Pharma, however, is still comfortable. "As far as the pharmaceutical industry, PhRMA and its member companies, yes, they say a deal is a deal. We'll see what happens," said the health care lobbyist.