WASHINGTON -- Thousands of people marched on the White House and the Office of the U.S. Trade Representative on Tuesday to protest a new trade agreement that public health experts warn would cut off access to life-saving medications for AIDS patients.

The protests are tied to the International AIDS Conference, a week-long event in the nation's capital devoted to improving global treatment programs, sharpening public policies and ending the disease. Thirteen people were arrested after hanging AIDS ribbons on the White House fence and refusing to clear the street in front of the White House. Thousands of others decamped across the street to Lafayette Park, chanting, "Obama, come out, we've got some sh*t to talk about!"

Activists in Washington this week are demanding a handful of policy changes related to HIV/AIDS, including immediate treatment for the thousands of low-income Americans currently on waiting lists for HIV drugs, the full implementation of Obama's domestic health care reform bill, increased global AIDS relief funding and an end to free trade agreements that inflate the prices of drugs around the world by granting long-term monopolies to pharmaceutical companies.

Hundreds of public health organizations have backed the agenda, which is posted online at WeCanEndAIDS.org. Many were present at the protests, including representatives of the American Medical Student Association.

Nevertheless, President Barack Obama's administration has opposed many of policy changes, cutting global AIDS funding under the popular PEPFAR program, while pursuing trade policies that economists say increase the prices of AIDS medications, cancer drugs and other life-saving medications both at home and abroad.

By contrast, Obama's Affordable Care Act contains a host of provisions to broaden and lower the cost of domestic health insurance. Those policies should make insurance more widely available and less expensive for HIV patients. Obama's trade policies, however, could ultimately increase the cost of that insurance.

Trade protesters were especially prominent at the afternoon's event. Several held banners objecting to the Trans-Pacific Partnership, a major trade deal that the Obama administration has been negotiating with 10 Pacific nations for the past three years. According to leaked drafts of the talks, American negotiators are pursuing a host of intellectual property terms that would lengthen drug company monopolies on medications, including drugs introduced in Vietnam, a developing nation that receives PEPFAR funding from the U.S. These policies, in turn, put upward pressure on drug prices all over the world. The negotiating texts for the trade pact are kept secret from the public, but more than 600 corporate advisers, including representatives of drug companies, can access them through positions on official advisory boards.

"Fire Ron Kirk!" protesters chanted Tuesday, referring to the head of the Office of the U.S. Trade Representative, the agency formally tasked with negotiating the deal.

UNAIDS, the United Nations' anti-AIDS group, also criticized the policies being pursued under TPP in a June report.

Doctors Without Borders released a new report to coincide with the conference, analyzing leaked provisions of the TPP, which concludes, "If the U.S.'s demands are accepted, the TPP agreement will impose new IP rules that could severely restrict access to affordable, life-saving medicines for millions of people."

USTR spokesperson Carol Guthrie told HuffPost her agency is taking into account feedback on its efforts, including feedback from Tuesday's protests. "USTR has gotten a great deal of feedback on our early TPP proposals and we are in fact reflecting carefully on it, and want to continue to work with all stakeholders on getting this policy right," Guthrie said, pointing to a recent Kirk-penned blog post that emphasized the need to balance the intellectual property incentives for drug companies with the treatment concerns.

She also pointed to a Sunday statement from the White House that said, "The Obama Administration remains steadfast in its commitment to people living with, or affected by, HIV throughout the world."

But such statements appeared to hold little comfort for the protesters on Tuesday, who carried signs declaring, "PFIZER + OBAMA'S TPP = DEATH FOR PEOPLE WITH AIDS," and "RON KIRK: TRANS-PACIFIC TRADE DEAL KILLS."

The protests are particularly pointed for the Obama administration for taking place in Washington, where the president is more popular than in any state in the nation. Yet the district features a higher AIDS/HIV rate than any other area of the country, making AIDS policy issues a matter of deep significance to the city's residents. At 3.2 percent, the HIV infection rate in D.C. is more than triple the rate the World Health Organization uses to identify epidemics, and is higher than the rate in many developing nations.

Doctors have long known that HIV drugs can prolong a patient's life for decades. But access to such medicines became an even higher priority issue over the past year, after research was published showing the medications were also 96 percent effective at preventing transmission of the disease to others.

This article has been updated to include information about a new report from Doctors Without Borders. 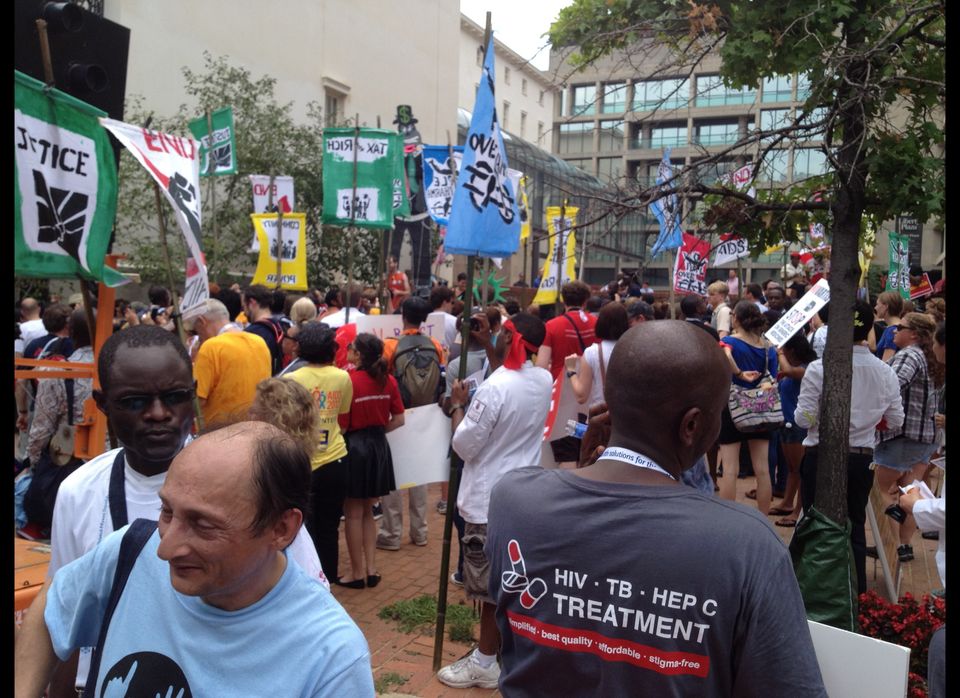