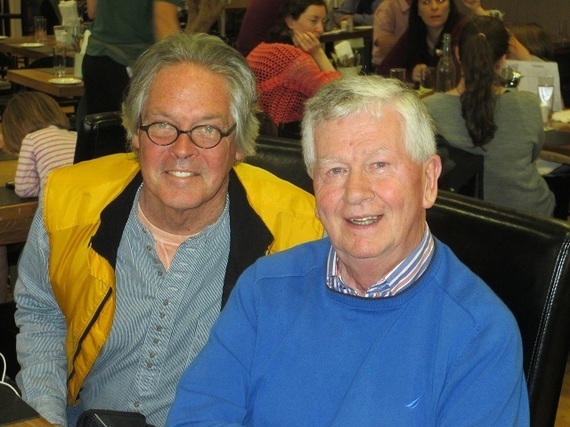 By hook or by crook, I was destined to connect in Ireland with John Joe Vaughan -- two brash Irishmen separated by a sea of blue, roiling waters rushing to a horizon where water flushes up against the sky. It was God-ordained.

I had met John Joe (pictured above, right, with Greg O'Brien) eight months earlier at Logan Airport upon my return to Boston from Dublin, an annual pilgrimage to Erie; he had just arrived himself with family to visit his daughter Rena, who now lives in New Hampshire. While I was on the cellphone responding to a queue of backlogged voicemails, Rena began waving at me. She recognized me from a photo in my book, On Pluto: Inside the Mind of Alzheimer's.

"I want you to meet my father," she said, noting that her dad had been diagnosed with Alzheimer's, and was reticent to talk about it until reading Pluto. She had given him a copy.

I was humbled, but that was just the beginning.

John Joe, 79, of New Ross in County Wexford, ancestral home of the Kennedys, has a smile that would light the River Liffey and the handshake of a heavyweight champion. He embraced me, eyeball to eyeball, and I saw the tears streaming down the side of his creased, righteous face, the two of us in a fight against a demon of a disease.

"I know how it feels," he said to me. "We fight together now as brothers, right?"

And so we are brothers, joined now in a worldwide fight against Alzheimer's, from Cape Cod to the Irish Sea. On the lip of Worldwide Alzheimer's Day, September 21, marking a month-long international awareness campaign, the fight is fully engaged.

And if the tag-team, rope-a-dope of John Joe and I are any indication, Alzheimer's, in time to come, could be down for a hand count, if lawmakers worldwide, various committed parties, caregivers, and those with the disease, that can take 20-years or more to run its death-in-slow motion course, join forces around the planet.

This was no brief encounter with John Joe -- a father of eight with his devoted wife Peggy, grandfather of 17, a retired teacher and school principal, raised in rural Marshalstown without electricity and paved roads. He invited me to spend a week in late July writing and just hanging with him over a few pints at his family's summer cottage on the Irish Sea in the fishing village of Duncannon, out on a peninsula at the mouth of rivers Barrow, Nore and Suir, overlooking the majestic 800-year-old Hook Head Lighthouse. It's one of the oldest working lighthouses in the world where legend has it that monks from the nearby Dubhan monastery lit fires in the fifth century to warn ships from the treacherous rocks. Today, the Fresnel lens flashes every three seconds; I counted the blinks in my bedroom each night as I tried to sleep, captivated by the night sky flecked with infinite specs of white, reflecting on the lighthouse and the craggy peninsula just across from the narrow strait called Crooke. It is a place where in the mid 1600s British military tactician Oliver Cromwell, charged with defeating the rebellious Confederate Coalition in Ireland, declared that he would take the country "By Hook or by Crooke," a declaration that would last in the vernacular hundreds of years.

And so John Joe and I met by Hook or by Crooke, in county Wexford where my mother's family hailed--she, as well, a victim of Alzheimer's. John Joe's mother also died of Alzheimer's and his older brother is stricken with the disease, and now doesn't recognize John Joe, a journey that awaits him, he fears.

Over a pint in Wexford Town, John Joe, named for his uncle John and his father Joseph, talked for one of the first times about the horrors of Alzheimer's that is consuming a generation worldwide, one diagnosis of dementia about every minute, one of the world's biggest health and social challenges, according to the Alzheimer's Association. Globally, the number of individuals living with dementia (the death part comes later) is expected to rise from the present 46 million to more than 131 million in the next 35 years at a staggering cost of care. In the US alone, the cost of care for those with dementia is expected to rise to $2 trillion by 2030.

"I'm emotional about this," says John Joe. "I can't control that; it's the card I was dealt. What can you do about it? I refuse to give in. So I fight on. I retreat into myself and fight on. It makes me nervous, the progression I have to face."

Once quick-witted and gifted with the Irish natter, John Joe is now slower to the draw, yet he uses humor to make fun of the fact that he can't remember. As they say in Alzheimer's, he makes new friends every day. A remarkable man, an incredible teacher--to his children, his students, and to me--John Joe always had a fascination with the world beyond him. He encouraged everyone around him to open their minds to broader horizons. Now his world is shrinking in disturbing ways, but he presses on in muscle memory, indelible images, analogous to a palate of oil colors ready to paint a canvas.

John Joe has always been a fighter, yet he has an artistic soft side, a thriving right brain that is guiding him back to his love of art, a self-healing therapy from the ravages of a disease that robs a sense of self. He spends hours now painting in oils; it's a passion and yet a challenge to remember what colors to use. So he has devised a scheme of selecting the proper oil colors, somewhat similar to a carpet swatch display where John Joe has laminated and labeled the colors to choose the right ones. And he does.

Art--whether painting, music or writing -- stimulates the brain, stirs memories and reduces agitation caused by Alzheimer's. By his own admission, John Joe is no Michelangelo, yet his work is inspiring in so many ways. Upon my visit to Duncannon, he presented me with an impressive painting of Hook Head Light. It hangs now in my family room.

"What scares me about this disease," he says over another sip of his pint, "is the loss of memory and the inability to carry a conversation. The brain just isn't processing; it's stalled. It's embarrassing. So I often avoid conversation. I retreat into myself, and at times deal with rage. People who know me say, 'He's changed a lot.'"

I understand. I tell him about my daughter's wedding two summers ago when I had to detach myself several times from family and friends to retreat in solitude and restart the brain. "I used to hold court as such gatherings," I tell him. "I thrived on it. My nickname among friends was the 'Senator from Cape Cod.' No longer. I've left office; things have changed."

What hasn't changed about John Joe is his heart and his gut Irish humor. Alzheimer's drives one from the mind to the place of the heart, the soul. "I may have tears in my eyes, "he says, "but I'm not crying out of sorrow. It's part of what I've been handed. I was blessed with a good family that gives me strength. I have no cause for complaint.

"I laugh, like you, at how long it takes me to remember."

I draw the analogy with John Joe, one he relates with, of comparing Alzheimer's with the basement of a house. "Ever been in a basement doing laundry at night when someone in the kitchen turns the cellar light out?" I ask him. "You scream, right, and you throw a few 'F' bombs until someone upstairs turn the light back on. That's Alzheimer's. A light goes off, and one goes into rage because it's dark. At some point, the light goes off forever."

John Joe laughs, the kind of gurgle one would expect from a leprechaun. I'm looking for the rainbow now. He's on a roll. "If a cure comes," he says. "It will likely come from America. I hope you call me up some day and say, "John Joe, I have a little pill for you..."

"You'll get the first call," I tell him.

Two Irish guys in a pub, full circle near the Irish Sea, separated by 2,992 miles, connected for a lifetime by a disease that will take their lives. In some ways, doesn't get any better...

Greg O'Brien's latest book, "On Pluto: Inside the Mind of Alzheimer's," has won the 2015 Beverly Hills International Book Award for Medicine, the 2015 International Book Award for Health, and is an Eric Hoffer International Book Award finalist. He is also the subject of the short film, "A Place Called Pluto," directed by award-winning filmmaker Steve James, online at livingwithalz.org. NPR: All Things Considered has run a series of pieces about O'Brien's journey, online at npr.org/series/389781574/inside-alzheimers. In 2009, he was diagnosed with Early Onset Alzheimer's. His maternal grandfather and his mother died of the disease. For more information go to: OnPluto.org. O'Brien serves on the Alzheimer's Association Advisory Group for Early Onset Alzheimer's.

Greg O’Brien is an award-winning investigative reporter, has been diagnosed with early-onset Alzheimer's and one of those faceless numbers.