"International Art English" is back. The essay of the same name, penned by David Levine and Alix Rule and published in the online journal Triple Canopy one year ago, touched off a minor furor with its attempt to prove scientifically that the art world was a hive of pompous windbags -- that is, that the official language of art was a linguistically meaningless jumble of buzzwords written in a tortured style imported from French theory, a claim the authors said they could verify through running 13 years of press releases through a computer. The concept of International Art English (IAE) got plenty of press pick-up, and has sustained various debates and forums in the months since. Now, the listserv/online theory journal e-flux -- source of the original press releases analyzed by Levine and Rule -- has issued two scathing replies attacking the essay for being smug and methodologically sloppy, courtesy Martha Rosler and Hito Steyerl. I hear Levine and Rule are planning a fresh reply of their own tomorrow. 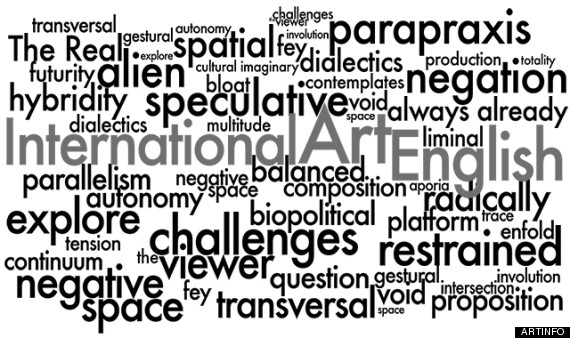 Is anything actually at stake in this tempest-in-a-teapot debate? Like Rosler, when it comes to the original article, I found the tremendous excitement it caused to be more significant than the argument itself. The central assertion of the "International Art English" essay, that today's artspeak amounts to an entirely new language (it "has everything to do with English, but it is emphatically not English"), seemed both overstated and trivial -- but most of all strangely tone deaf about the art world about which it claimed to speak so authoritatively.

At the outset, we should say that Levine and Rule's decision to use e-flux's press release archive as source material was obviously made for convenience, with their po-faced justification that press releases stand as the "purest articulation" of art language being an ex post facto justification. Yet it's not the target of press releases per se that seems off to me but the assertion that these particular press releases stand for trends within the entire art world. As the authors mention themselves, the vast majority of what e-flux sends out hail from non-profits and biennials, institutions with quite specific reasons for maintaining a veneer of academic seriousness in a way that, say, an art fair does not.

When a pseudo-academic essay diagnoses the entire world as being plagued by pseudo-academic obsessions, you might guess that, possibly, there is some observer bias at work. Promoting their article in the Guardian, Levine and Rule attributed the dominance of IAE to the art market boom. But the jargon pilloried in the Triple Canopy piece is all but irrelevant to the discourse around the unholy trinity of Damien Hirst, Jeff Koons, and Takashi Murakami, the most visible faces of the market. Alice Gregory has given an account of writing catalogue copy for Sotheby's: "I sprinkled about twenty adjectives ('fey,' 'gestural,' 'restrained') amid a small repertory of active verbs ('explore,' 'trace,' 'question')," she explains. "I inserted the phrases 'negative space,' 'balanced composition,' and 'challenges the viewer' every so often." A vapid instrumentalization of aesthetic vocabulary, to be sure -- but as far as I can tell, one pursued at a distance from the knotty conventions of IAE.

Even within the high-minded museum world, anthropologist Matti Bunzl's recent book, "In the House of Balloon Dog" -- a first-hand account of the debates inside the MCA Chicago leading up to its Koons retrospective -- describes in some detail the "rearguard battle" being fought by curators championing conceptual difficulty against commercial populism. You don't need references to "hybridity" or "biopolitics" to advertise the Met's Alexander McQueen show or the MoMA's "Rain Room" experience. You just don't. So I would need more information about why the authors think this, exactly, is the central burning issue of the day, and where they see it fitting in with the world beyond e-flux.

I wouldn't deny that the art world is still awash in a lot of sophomoric intellectual bullshit. It clearly is. Yet the obviousness of this point is the problem; the essay is just a clever way of telling people what they think they already know, without doing justice to the complexity of the actual environment it is generalizing about. To their credit, I think Levine and Rule mean their essay to have a political thrust, unmasking art's false investment in a superficially radical vocabulary. They also gesture towards the idea that artspeak is off-putting and elitist. Unfortunately, its argument sounds a lot like conservative philosopher Denis Dutton's "Bad Writing Contest," for which he held up passages from leftist cultural thinkers like Fredric Jameson or Judith Butler to scorn. Less remarkably, the idea of IAE lends itself to old-fashioned anti-intellectualism; it finds its final destiny in bland career development advice for artists and as the punchline for Huffington Post's recurring "Really?! You Call This Art?" feature. "What, you don't speak International Art English?," HuffPo's caption writer asks, mocking a sculpture she finds so contemptuous that she doesn't even bother to figure out who made it.

By consensus, the most useful application of the concept was Mostafa Heddaya's admirable article, "When Artspeak Masks Oppression." Attending a panel at the Guggenheim on art in the United Arab Emirates, Heddaya noted how the ongoing controversies over labor conditions for workers building the Gugg's new Abu Dhabi museum were given short shrift, and he reflected on how art jargon seemed to serve as a tool to deflect the question. But here's the thing: Though he references IAE, as far as I can tell, what Heddaya witnessed was not a particularly robust example of IAE at work, at least not as Levine and Rule explain it. In the quote he singles out from curator Reem Fadda, she does drop the term "ethical positionality" in questioning whether criticism should be imposed on the UAE by outsiders. Maybe this sounded different in the auditorium, but I think her statement would have been clear to the audience. As a whole, her statements seem politically evasive, but linguistically unremarkable.

Heddaya goes on to connect it to another example that he says follows the same pattern, this time a Chinese Communist Party paper denouncing Western governments for their support of Ai Weiwei. But the connection to IAE is hazy. The cited text doesn't contain any of the labored Gallic-isms at issue in Triple Canopy's blockbuster; it is, as he himself says, rather prosaic ("The West's behavior aims at disrupting the attention of Chinese society and attempts to modify the value system of the Chinese people"), merely an example of how a warped version of anti-colonialism has been used to justify authoritarian policy. This is also true of the other example cited, a statement by an artist about Arab Spring-themed work which displays the art world's characteristic politics of ambiguity, but actually does so in a fairly straight-forward way. As far as I can tell, the gimmicky concept of International Art English doesn't really add anything to the clarity of the discussion, and probably takes a little away, framing a political question as a rhetorical one.

IAE, as Levine and Rule tell it, is a language that became detached from its original theoretical meaning, and is used mainly as a way to drum up superficial interest. Which is why it is amusing -- and probably telling -- that the term "International Art English" almost instantly became detached from its original meaning, and used by various people as a buzzword to drum up superficial interest. In a way, that fact tells you all you need to know about the debate at hand.

Paddle8 Nets $6 Million From Team of Investors Including Damien Hirst