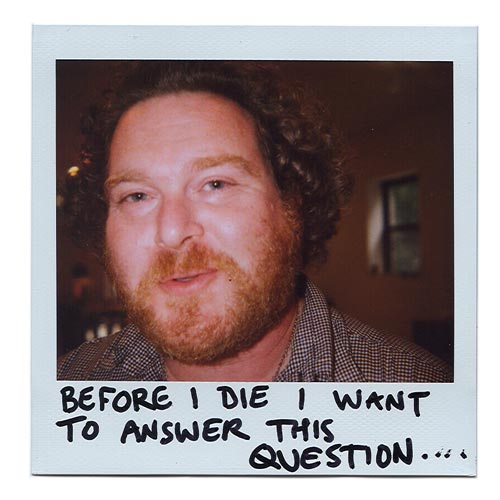 "Before I die I want to answer this question..."

"What do you want to do before you die?" It sounds like the beginning of a very long late-night conversation with friends. In this case, the question is the catalyst for a photo project by Nicole Kenney. Kenney has traveled all over the world, from Lilly, Pennsylvania to Kerala, India, with a Polaroid camera and sharpie, capturing the faces and pre-death aspirations of thousands of people. Kenney also took the project to a hospice care-center for those who are terminally ill.

In a number of years, Kenney said she will check in with the subjects of the photographs to see how close they are to achieving their wishes. She said she hopes that the photos will serve as a tangible promise to themselves to go forward and make their life-goals a reality.

Turnstyle: Can you tell me about the "Aha!" moment when you realized you wanted to do this?

Nicole Kenney: I've always loved the question, 'What do you want to do before you die?' because I feel like when you meet someone you usually ask, 'What you do, where you from?' But when you ask someone what they want to do before they die ... You cut to what's really important to that person, what makes them tick.

I was part of a group called Fabrica in Italy, and I did a mini-version of this project where I asked what people wanted to do before they die, and ... super-imposed answers on tombstones. Then in 2008 my friend who was co-owner of a gallery in Chicago suggested I co-curate a show on death and extinction, and Polaroid's [instant film] at the time, [was] facing a sort of death.

I had the "aha!" moment lying in bed in my Brooklyn apartment. I put two and two together, and thought, this would be the perfect place for the project to grow. I would take Polaroid photos until there were no more Polaroids left, asking people to state what they wanted to do before death. In that moment, I knew I wanted it on a website too. On a website anyone can see it, anyone can participate, they can take their own Polaroid and send [it] to us or we can take them. I wanted the project to be universal and expansive, that was the "aha!" moment.

Turnstyle: It said on your website that you believe Americans seemed to strive to answer the question in a way that separated them from the rest. Do you feel this weakens the original goals of the project, to have people speak to authentic wishes or dreams they have?

Kenney: I can hypothesize, but in the end it's my perspective. People come to their own conclusions, but at the same time you do notice common answers. For example, in America, you notice a repetitive answer is women wanting children and people wanting to travel. In India, a lot of people want to own a shop, and children wanted to study. There are a lot of unique answers but enough repetitive answers too.

One thing I love about this project is that it celebrates common humanity as well as difference. India or America, old or young, we're all alive on this planet right now, in this sliver of time. We're all going to die one day. We all have goals and wishes. We're all the same.

Turnstyle: I noticed that there are far fewer photos in the hospice section of the site. Why is that?

Kenney: If I'm meeting someone on the street or in "everyday life" and I ask, 'What do you want to do before you die?' people say things like 'I want to parachute,' 'I want to be a mother.' It's not like death is so close. At the hospice [center], it was very sensitive. It was kind of like the elephant in the room. A lot of the time we'd have hour or two hour conversations with the patients and then take a Polaroid. It just took longer because it's more sensitive.

They've thought about the fact their life is coming to an end. They were surprisingly more comfortable, they knew what was important to them in their lives before they died.

Turnstyle: Can you share an interesting story from the hospice center? Were there any moments that really stood out?

Kenney: A lot of the stories were very beautiful. I would walk out of the hospice feeling grateful to be alive. There was this woman who said before she died she wanted to be 20-years-old again, which she wrote on the Polaroid. But there was a second part she didn't write on the Polaroid. The second part was, 'Before I die I want to be 20 years old again so I can marry my second husband first.'

So, he had passed away and he seemed like the love of her life. She would say, 'But you know he's here and I talk to him and I tell him, I'm not ready.' Who knows what happens when we die, but that idea that people see their loved ones when they died is really interesting to me. The idea that she was talking to him, knowing she's so close to death...It was definitely touching and memorable.

Turnstyle: Do you think having a relationship with the person you ask has any effect on the answer they give you?

Kenney: It's possible that people close to me might feel open to being more vulnerable. But I've also had strangers give me vulnerable answers. This one man said he wanted to resolve his inability to have intimate relationships. I was really moved by the vulnerability it took to share something like that with me on the project.

Vulnerability connects us. If you share a vulnerable wish that's really true I think it resonates... it strikes a chord in other people. When you're brave enough to share something you like that it really inspires people.

Turnstyle: So, what do you want to do before you die?

Kenney: Before I die want to live a long life with my amazing partner and leave some great loving kids behind.

Turnstyle: And how close do you feel to reaching your goal?

Check out a gallery of photos from Before I Die I Want To... at Turnstyle News.