Today, May 17th, 2014, marks the ninth annual International Day Against Homophobia & Transphobia held in over 120 countries and impacting hundreds of millions of lives. IDAHOT, as it is commonly referred to, is the largest LGBTI solidarity action in the world where activists come together to address the many stigmas and restrictions that they may face as gender and sexual minorities, including violence, intimidation, discrimination and even death.

Since the previous IDAHOT in May 2013, an unprecedented amount of anti-LGBT fervor has taken place globally. From “don’t say gay” bills in Russia, to steeper criminal penalties in Uganda and Nigeria, to the reversal of advancements in India and Australia and so called “religious prosecution” defenses in several states throughout the US, many affronts to gender and sexual minorities have taken place in just the last year. Murders of transgender and homeless youth in Jamaica, further attempts at reparative therapies found in parts of Latin America, and anti-gay and racist insults thrown at football players in Eastern Europe are just some of the more visible attacks on these communities. Currently, 40% of the world’s population still lives in one of the 81 countries where homosexuality is criminalized, including 10 that carry the death penalty. Over 1,100 murders of transgender persons have been officially reported in the last six years. These are just some of the many unreported, silenced and censored cases of transphobia. While the global view of human sexuality and gender fluidity is growing, it is evident that there is still so much to be overcome.

Gender and sexual minorities globally face continued oppressive actions not only by the societies of which they are a part, but by the governments which are supposed to guarantee and respect their rights. In spite of these hostile environments, on May 17th brave and courageous advocates will come together to stand up for their rights and to express who they are, to say how they feel and to demand fair and equal treatment under the law. Whether in Mauritius, Morocco or Mongolia, LGBTI activists and their allies will demonstrate alongside hundreds of millions of others around the world and online to act against homophobia, biophobia, lesbophobia and transphobia and to celebrate sexual and gender diversities and their free expression.

This day of action was created as recently as 2004 and May 17th was chosen to mark the day that the World Health Organization declassified homosexuality as a mental disorder. This year it is anticipated that there will be over 1000 actions in over 120 countries, with millions of people participating online to commemorate the International Day Against Homophobia & Transphobia. From giant marches, parades and demonstrations; to community forums, conferences and public debates; to random acts of solidarity and actions to defend freedom of expression, hundreds of events will take place throughout the world. Millions will participate in online campaigns that seek out art, stories and expressions of self. Important discussions will take place amongst opinion leaders at the highest levels including the World Bank, the European Union, many United Nations agencies like the World Health Organization, UNAIDS, the Office of the High Commissioner of Human Rights, etc. They will discuss everything from violence, intimidation and murder towards gender non-conforming individuals, to increased HIV funding for key populations including men who have sex with men and transgender persons, to the economic costs of homophobia and transphobia, to safety and security of LGBTI refugees. International organizations as well will release documentaries on the lives of LGBTI Africans, documents on the state of LGBTI human rights, and a scathing report on the response to LGBTI asylum seekers.

IDAHOT has enjoyed an exceptional rate of growth each year as groups as individuals adopt, adapt and develop it within their own locales the world over, and this year, with the theme “Free Expression,” it is shaping up to be one of the largest ever. There is no doubt that many of the organizers, activists and advocates will face opposition as they attempt to highlight the current situation of sexual and gender minorities, and to claim respect for their full human rights and expressions of self as guaranteed by international law. As in previous years, many activists may face criminal penalties, verbal and physical intimidation, and a poor reception by their local community members as a result of their efforts. However, their actions shed light on an ever visible issue that will not be silenced and which serves to illustrate the fundamental importance of protecting free expression in advancing all human rights.

In the end, what is most striking is the bravery and courage of groups and individuals across the world in a wide variety of contexts as they stand up to protect and demand respect for their basic human rights, including free expression. Their rights to live and to love and to express fully who they are, make up the fundamental principles of human rights, of justice, of peace, and of expression and cannot be ignored.

Listed below are just some of the actions in over 120 countries that will be taking place this year to commemorate the 2014 International Day Against Homophobia & Transphobia.

To learn more about the other 2014 events that are taking place around the world as well as the International Day Against Homophobia & Transphobia please go to www.dayagainsthomophobia.org and follow them on Facebook and Twitter. 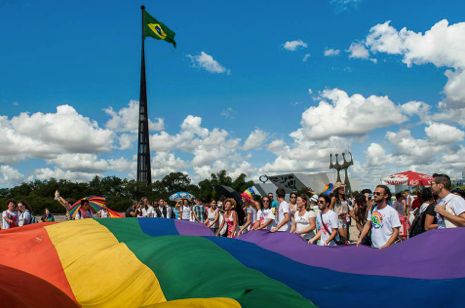 1 / 26
Brazil
Over 100 actions are anticipated in Brazil for the International Day Against Homophobia & Transphobia 2014, with all major cities and all 27 states expected to be represented. In the state of Rio de Janeiro alone, LGBT communities and allies -– as well as top figures from politics, literature, academic, activism and the arts –- will come together for a symposium on LGBT rights and freedom of expression at the Amnesty International offices in Rio city center. The nationwide LGBT membership organization, ABGLT, will also host its 2nd annual conference to coincide with the IDAHOT in Niterói. A public march, an afternoon of 'guerilla gardening', musical performances, film screenings, a major photography exhibition documenting Brazilian LGBT lives, workshops and seminars have also been announced in the South-Eastern state. A whole month of diverse events spanning arts, politics, culture and sports -– organized by a huge coalition of groups -– will take place around May 17 in the North-Eastern state of Bahia. In different towns and cities of São Paulo state, many events are also already announced. And, further inland, many actions have already been confirmed in Brazil's rural heartlands, marshlands and rainforest areas. In Manaus, Amazonas, for example, activists will be holding an awareness-raising 'Rainbow Run' in honor of May 17. Brazil's ex-President Luiz Inácio 'Lula' da Silva passed a federal decree recognizing May 17 as an official national day in 2009 and, year after year, a growing number of towns, cities and states make the choice to recognize the Day –- as the city of Betim most recently did, on April 15, 2014. In Brazil –- home to one of the largest and most visible LGBT movements in the world –- May 17 provides a unique moment for activists to organize in a unified way, and to raise awareness of international LGBT rights issues.