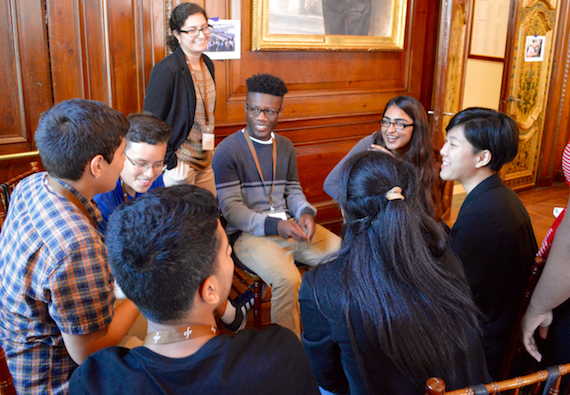 "As women, we must speak out, speak up, say no to our inheritance of loss and yes to a future of women-led dialogue about women's rights and value." - Zainab Salbi

As a young adult from Pakistan, I grew up with women in my family facing gender inequality. Women in my family often do not voice their opinions, and when they reach the age of about 18, daughters are pressured to discontinue their education so that they can get married. As a senior at William Cullen Bryant High School, I participated in Global Kids' Summer Institute at the Council on Foreign Relations where I learned more about how gender inequality is a global issue, and this knowledge has inspired me to address this problem head on.

Hillary Clinton once stated, "Women's rights are human rights," but women continue to face a persistent gap in access to opportunities and decision-making power compared to men. Globally, women have fewer opportunities for economic participation than men, less access to basic and higher education, face greater health and safety risks, and are often politically under-represented. Gender inequality is an issue that is important to discuss because as children, we learn to adapt to specific gender roles, and as we grow older, they become more evident and important to our role in society.

Women make up half of the world's population and without half of the population, men are not able to do much. People have to realize that women are strong, smart and involved with the world much more than they were a half a century ago. I believe that one reason why there is gender inequality is that some people still do not believe women belong in high-powered positions. Some men believe women are not "strong" enough physically, mentally, and emotionally to handle the stress that comes with some positions. They think that we are not physically strong enough to lift heavy items or emotionally and mentally ready for the stress that comes along with certain professions, and that we need to devote our time to family and household responsibilities. This patriarchal system exists in many parts of the world, including here in New York City where I was raised. When I say that I want to become an engineer or a tech professional, I realize the barriers I'm up against because those fields are heavily dominated by men in the United States. Also in South Asia where my family is from, society thinks that men should work and the women should stay home. I am changing that.

I am the first female in my family who will forge a different path than those who followed traditional gender roles, such as giving up their education and getting married at a young age. I will be attending college and moving forward in my academic journey. I want to be able to work in a field that I am interested in and be able to live and support myself, instead of relying on my husband. I know that if I stand up and set an example to my family and society, other women and future generations will be able to follow in my footsteps and become successful. In the words of Malala Yousafzai, "I believe in equality. And I believe there is no difference between a man and woman. I even believe that a woman is more powerful than a man."