"Today 366 million people have diabetes. At a conservative estimate there must then be 1 billion people who either have diabetes or live with someone who does," said Professor Jean Claude Mbanya, President of the International Diabetes Federation (IDF). 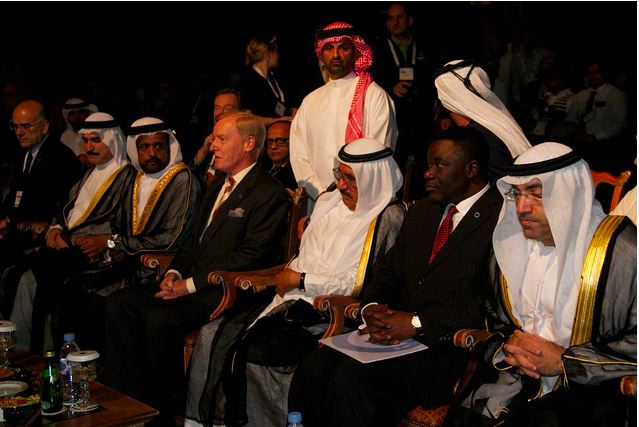 Mbanya made his proclamation at the opening ceremony of the IDF World Congress. Almost 15,000 participants have descended upon Dubai, part of the United Arab Emirates (UAE) and where I am now, for the Congress. Researchers, scientists, heads of state, diabetes organizations, professors, medical practitioners -- and several of Dubai's royal highnesses including His Highness Sheikh Hamdan Bin Rashid Al Maktoum, Deputy Ruler of Dubai, and His Excellency Qadhi Saeed Al Murooshid from the Dubai Health Authority -- are here to stem the tide of diabetes.

Why Dubai? Because here, hidden behind the towering skyscrapers, falafel, palm trees and sand, and throughout the region, Professor Mbanya told us, "one in five people has diabetes." IDF is here to encourage governments in the region to act in the face of the diabetes epidemic.

Among the staggering statistics revealed at the opening ceremony: Six of the top 10 countries with the highest incidence of diabetes are in the Middle East.

Said Mbyana in his keynote speech:

"Much of the world has been shaken from a deadly slumber. Governments have woken up at last and realized that diabetes and related NCDs (non-communicable diseases) constitute a global epidemic that requires urgent action. And they must not be allowed to go back to sleep! ... Faced with an epidemic that will claim more than 4.5 million lives just in 2011, we worked with a measured urgency to mobilize our community. As a result of that action, much ground has been covered in our push for change -- change so deep and far-reaching it will affect the way the world prepares itself for centuries to come. That is no mean feat, my friends! But it is one we must achieve, for we are in a race against time.

Until the conference closes Dec. 8 I'll be writing highlights from the Congress. You can follow me on twitter at http://www.twitter/diabetesmyths.com and in pictures at http://www.flickr.com/photos/71272098@N04/.