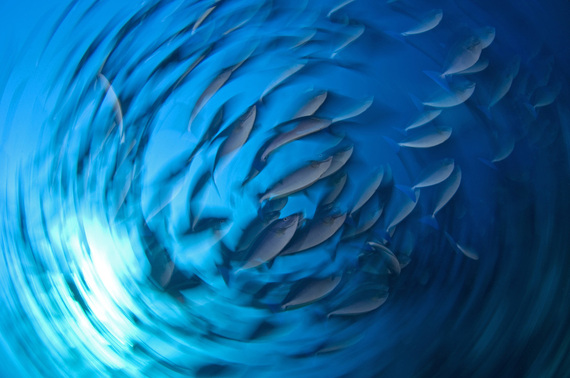 If you were to sit down to dinner with four friends and all order seafood, it is more than likely that at least one of you would be eating a stolen fish. That fish doesn't taste so good anymore, does it?

The scale and reach of illegal fishing is huge, costing in excess of US$23.5 billion per year to the global economy in lost revenue. The poorest are hit hardest; robbed of food for their families and the opportunity to earn a living. The Government of Indonesia estimates the cost to their nation alone at over US$3 billion per year.

But it's not just about the money. As the Associated Press Pulitzer prize winning reporting has revealed, many that work in illegal fisheries are in great peril, and are often subject to beating, torture, kidnapping and even murder.

However - there is good news on the horizon in the fight to contain what is often referred to as Illegal, Unreported and Unregulated or IUU fishing. The UN Port State Measures Agreement (PSMA) has been ratified by more than the 25 countries needed and will enter into force on 5 June 2016 becoming the world's first ever binding international accord specifically targeting IUU fishing.

This is an important milestone in the fight to eliminate illegal, unreported and unregulated (IUU) fishing. This treaty is a mighty weapon in the arsenal for nations to fight illegal fishing, stopping IUU fishers moving their catch from ship to shelf and from illegal fish making its way onto your plate.

Foreign-flagged IUU fishing vessels, as well as transport and support vessels, will now have a harder time offloading their illegal bounty in countries that have ratified the agreement. There will now be increased inspection in ports - and the possible refusal of port entry or access to port services including the landing, trans-shipment, processing and packaging of seafood.

Despite the good news, we as civil society organisations urge governments not to get complacent. The treaty will only truly be effective if key fisheries countries which have some of the highest landings such as Russia, Japan, China and Malaysia also sign up.

Effective implementation is also fundamental. Countries must work cooperatively to close the net by helping developing countries to fully implement the agreement and to complement those efforts by adopting domestic laws to crack down on illegal fishers. At the same time, the major market states for fish: the US, Europe, China and Japan must align their import rules to close their markets to illicit catches.

The harm caused by IUU fishing to fish stocks and fishers around the world can indeed be lessened with concerted action, cooperation and leadership. The EU IUU fishing Regulation, is a promising measure, which issues a yellow warning card to nations that have taken insufficient action to address IUU fishing, and bans imports (a red card) if the nation fails to address these shortcomings. Fishing countries are also starting to take a tough stance on IUU fishing. Indonesia has scuttled 174 fishing boats caught operating illegally in its waters. The US government has outlined a comprehensive set of measures in its IUU and Seafood Fraud Report, which TNC contributed to, and will strengthen enforcement, partnerships with state and local governments, industry, and control entry into the US.

Both Pew and Oceana's Big Data efforts are promising as they seek to aggregate and visualize AIS data to aid in monitoring and surveillance of IUU but this is only one piece of the puzzle.The Nature Conservancy is working with partners on technology to track and monitor small scale fishing vessels that fall through the cracks of these bigger systems.

We are also working with fishers around the world to improve fishing practices, with seafood processors and distributors to strengthen use of data and supply chain management, and with governments to strengthen laws and policies - over their local fisheries, and to regulate import of illegal or fraudulent seafood.

Technology used to ID fish at source will help too. TNC is developing its FishFace technology which will use affordable image recognition software to identify species from photos, much faster and more accurate sorting of fish will be possible at the processing plant, or even as it is landed on the boat. The ultimate goal is to turn it into a smart phone app that could be used on fishing boats around the globe.
Now that the PSMA is ratified, it's time to move on all fronts. More countries need to join the effort, supermarkets need to verify where their fish comes from and insist on traceability from bait to plate. TNC is looking forward to working with countries to take the next important steps to tackle this challenging issue both on the ground and collectively at the Our Ocean conference in September.