The Victory Fund Institute 2016 International LGBT Leaders Conference planners were the first to admit this year's conference was not what they had anticipated it would be. They planned around their Presidential Appointments Institute which was primed to push the Clinton administration, through their transition team, to hire record numbers of LGBT personnel. They were set to fight for the first 'open' LGBT member of the Cabinet and an openly lesbian or transgender ambassador. As the saying goes "the best laid plans of mice and men" do go astray.

Victory Fund has prided themselves on supporting openly LGBT candidates of both Parties. So how Victory Fund responds to the Trump administration will be interesting and important for their future. It is my hope responses to attacks on LGBT rights and on potential nominees to the cabinet will come from both Democratic and Republican Office holders who have won their races with the support of the Victory Fund. To date there has been no out-reach from the Trump transition team.

So instead of promoting LGBT candidates for positions and talking about new inroads that can be made to ensure LGBT equality around the world there was a sense of sadness, frustration, and people questioning how to approach the Trump administration which looks as if it will be populated with the most anti-LGBT individuals Trump could find.

A group of millionaires and billionaires joined by their anti-women and anti-LGBT beliefs. People whose views appear to be in lock-step with those of transition chair, presumptive VP-elect Mike Pence, who is notoriously anti-gay and anti-women. Pence wanted to take money from HIV-AIDS education and healthcare and instead use it to pay for conversion therapy.

The choice for the Department of Education is Betsy DeVos whose family began Amway and has funded every anti-gay initiative across the nation. Tom Price (R-GA) is Trump's choice for Health and Human Services. According to a column by Brendan Morrow "In 2011, he proposed the Protect Life Act, which would have denied government funding to health care plans that cover abortions. He has been given a rating of zero by Planned Parenthood and a rating of 100 from the National Right to Life Committee. He also voted against legislation requiring that insurance plans cover contraception. In terms of LGBT rights, Price voted in November 2007 against a bill to prohibit workplace discrimination against Americans based on their sexual orientation. He also voted to constitutionally define marriage as being between a man and a woman, and he voted against repealing Don't Ask, Don't Tell. The Human Rights Campaign gives him a rating of zero percent."

In Trump's alternate universe he can say "marriage-equality is a settled issue so it no longer matters what he thinks" and then say he is for overturning Roe v. Wade. He apparently has no understanding once he nominates a Supreme Court Justice he no longer controls what they do and both those decisions have an equal chance of being overturned if the right cases come before the court.

So the tone of the conference went from somber, to calls to fight and trying to figure out the best way to do that. In one plenary session Representative Sean Patrick Maloney (D-NY) said "the time for mourning is over. It's time to regroup, stand-up and fight for the things we all believe in."

The opening plenary session presented some of the Gay ambassadors President Obama appointed. Rufus Gifford, Ambassador to Denmark; Randy Brewster Ambassador to the Dominican Republic; Ted Osius, Ambassador to Vietnam who was skyped into the session; Michael Guest, Ambassador to Romania during the Bush administration 2001-2004; and Randy Berry Special Envoy for LGBT rights at the state department. The session was led off by Todd Larson who is with USAID. He spoke eloquently about what has been happening and his hopes for the future. One ambassador not represented was John Berry, who had been appointed Ambassador to Australia after serving as head of OPM in Obama's first term.

The ambassadors spoke of how far we have come and of taking part in Pride parades around the world and flying the rainbow flag from their embassies during Pride month. The consensus was it would be difficult for the Trump Administration to totally turn back the clock on these efforts. There may be no gay ambassador's named but local embassy staff and Foreign Service officers would support continuing the policies that exist. While all the LGBT Ambassadors named thus far have been white men it was agreed the foreign service is changing, if too slowly, and there is hope in the future there would be more people of color and women LGBT ambassadors named.

Some highlights from other plenary sessions included Senator Tammy Baldwin (D-WI) speaking about how we move forward and how she is looking at Wisconsin and what happened there in this election as she looks to her 2018 reelection campaign.

A standout speaker for me, and clearly the rest of the audience, was Dr. Rachel Levine. Dr. Levine, who is transgender was appointed by Pennsylvania Democratic Governor Tom Wolf as Physician General of the state of Pennsylvania. She is a woman of great accomplishments according to her bio 'including being Vice-Chair for Clinical Affairs for the Department of Pediatrics and Chief of the Division of Adolescent Medicine and Eating Disorders at the Penn State Hershey Children's Hospital-Milton S. Hershey Medical Center. Dr. Levine graduated from Harvard College in 1979 and the Tulane University School of Medicine in 1983. She completed her training in Pediatrics at the Mt. Sinai Medical Center in New York City in 1987 and then did a Fellowship in Adolescent Medicine at Mt. Sinai from 1987-88. Dr. Levine taught at the Penn State College of Medicine on topics in adolescent medicine, eating disorders and transgender medicine. In addition, she has lectured nationally and internationally on these topics and has published articles and chapters on the medical management of eating disorders."

Beyond all this it is evident Dr. Levine is a great spokesperson for the LGBT community. Contrary to some of our spokespeople she has actually done something in the real world and is able to relate to people in a different way. It would be my hope the Victory Fund find ways to have Dr. Levine speak to different audiences we want to influence.

At the Saturday lunch there were representatives from Emily's List and the Center for American Progress who spoke of the need for new messaging. But the highlight of the session was listening to newly elected Florida legislator Carlos Guillermo Smith from Orlando. He spoke of the impact the massacre at Pulse Nightclub had on him and his campaign. He then introduced three brave survivors from Pulse who were in the audience. The three were Adrian Lopez and his husband Javier Nava, and Christopher Hansen. They received a well-deserved and passionate standing ovation from the audience both for their courage that night and for their continued commitment to fighting for LGBT rights. 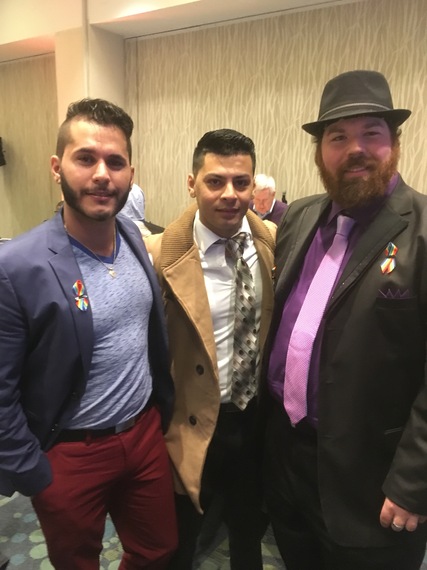 While the over 500 attendees at the Conference may not have attended the meeting they initially registered for, I think being with LGBT activists, elected and appointed officials from around the world for a few days gave everyone hope for a better future. They left with a shared a commitment to support each other and to fight on to ensure full-equality for LGBT people around the world.