November 19th is apparently International Men's Day (IMD). On the surface, it might seem like an idea whose time has come. After all, men are being proclaimed an endangered species. We're dying younger and living in poorer health than women. Men are more likely to be in prison and less likely to be in college than their female peers.

Even though we don't think we're witnessing the end of men, evidence tells us men face growing problems. But should we rally around IMD? For us, it just isn't the way to go.

We're concerned about the implicit symmetry of this day with International Women's Day on March 8th which evolved as a way for a disempowered group to express its own power, potential and solidarity. It was a festival of the dispossessed, and a way to focus attention on discriminatory laws and social structures.

Much of our own work over the years has focused on the negative results (for men as well as for women) of how we have collectively defined and exercised men's power within male dominated societies. In other words, understanding the very real problems that men face (and which are passionately highlighted by IMD advocates) is indeed important. But we can only end these vulnerabilities by tackling their root causes; those that lie buried within male dominated cultures and tied into how we raise boys to be men in a world run by men.

To put it simply, why do we need an International Men's Day when we've already got the whole year.

It's disturbingly true, as one website devoted to IMD notes, that men are twice as likely to be victims of violent crime as women. Men are more than 80 percent of the victims of homicide globally. But here's the thing: Men are also far more likely to commit these violent crimes.

The problem with the IMD idea is that men's vulnerabilities are not clearly and consistently put into the context of gender inequality and the ongoing oppression of women. For example, a review of homicide data shows that where homicide rates against men are high, violence against women by male partners is also high (and female deaths by homicides more likely to happen). Or, for example, men face particular health problems because we teach boys to be powerful men by suppressing a range of feelings, by engaging in risk-taking behaviors, by teaching them to fight and never back down, by saying that asking for help is for sissies -- that is, the values of manhood celebrated in male-dominated societies come with real costs to men ourselves.

We are genuinely pleased that the current incarnation of IMD holds, as a basic principle, the promotion of gender equality. That's a big improvement over some of the earlier attempts by "men's rights" advocates to get IMD off the ground. All the issues that drive the IMD proponents are valid: curbing male suicide, improving men's health, encouraging involved fatherhood, and preventing violence. However the principle of "gender equality" needs to be more than a separate guideline. Just as the causes of men's problems lie in gender inequality and the ways we've defined gender relations and masculinity, the solution to men's problems lie with gender equality and transformed and equal gender relations in the home, in religion, at work, and on the streets.

We're not opposed to using particular days to focus on issues facing men and boys. However, we'd much rather inject real meaning into existing opportunities, such as Father's Day as a time to push for policies to promote equitable caregiving, for example, than create a "men's day" all its own.

We also have one practical concern. November is a packed month with events that deserve our undivided attention as men. The United Nations has proclaimed Nov. 25th as the International Day for the Eradication of Violence Against Women; that day is the beginning of 16 Days of Activism Against Gender-Based Violence. It's the time that many countries launch their annual White Ribbon activities to engage boys and men to speak out to end violence against women and girls. Shortly after is International AIDS Day, December 1st. 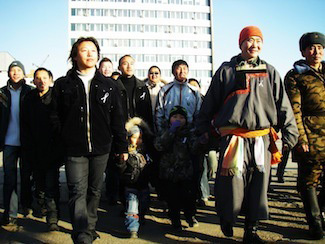 We're concerned that trying to build support among men to focus on a day for ourselves on November 19th takes away energy from these critical campaigns.

After all, men's violence against women and other men, and halting the spread of HIV/AIDS are critical issues for all men. That's why we and most of our networks around the world have stayed away from International Men's Day. We prefer to work all 365 days a year in support of gender equality, for the liberation of women from economic, social, political, and religious oppression, and for new and healthier definitions of manhood that lead to better lives for women and men.

All that is definitely worth celebrating.

Gary Barker and Michael Kaufman are leaders of Men-Care.org, a new international campaign that aims at men doing 50 percent of care work. They are writing a book on the global transformation of fatherhood. www.michaelkaufman.com www.promundo.org.br/en/