On Thursday, March 5, we can all celebrate International School Meals Day. Food for education matters whether here in the United States or in lands far away.

It is the right of every child in the world to have school meals. It is our responsibility as citizens to make sure they do. School meals have played such a vital role in history.

In the United States school meals help to fight hunger. Robert Campbell, a policy analyst for Feeding America says, "When school is in session, more than 21 million children rely on free or reduced-price school lunch programs every day, which guarantee them at least one nutritious meal."

Far less children though receive school breakfast and summer meals. Congress has to close the hunger gaps that exist in our school feeding. They can do so with the Child Nutrition legislation that will be crafted this year.

School meals are vital not only in the United States, but to children everywhere. Yet so many do not get them. The UN World Food Programme (WFP) says, "66 million primary school-age children attend classes hungry across the developing world, with 23 million in Africa alone."

Yet the foundation of health, education and progress in any society rests on school meals. As President Harry Truman once said, "No nation is any healthier than its children." A WFP school feeding report states:

School feeding supports families in securing education for their children, especially girls who are often differentially excluded from education. This promotes human capital development in the long run and helps break intergenerational cycles of poverty and hunger."

In times of emergency school meals can be a source of stability. Let's go beyond our shores to a land you may not have heard of, the Central African Republic. It's a country scarred by war.

Militant groups have attacked and displaced a million civilians. A humanitarian crisis has emerged in a country that was already in poverty.

Food supplies have been destroyed throughout the Central African Republic. The United Nations reports crop production is at 58 percent below the pre-crisis average. Poor families have almost nothing to fall back. There are no food reserves.

Only rations from WFP has prevented mass starvation. WFP relies on voluntary donations from governments and the public to carry out this life-saving aid.

One way WFP does this is through school feeding. Around 58,000 children in the Central African Republic received WFP hot lunches at school during January. This fed the children and encouraged them to come to classes, which so many have missed because of the violence in the country. 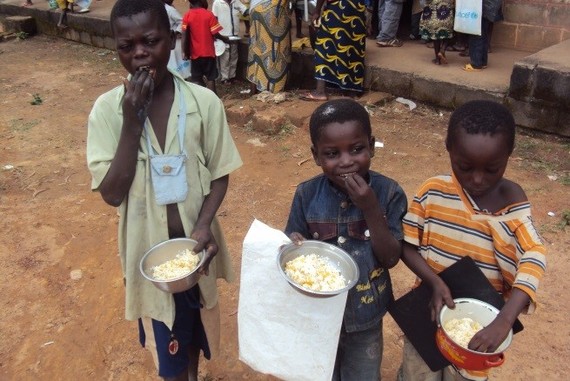 WFP wants to feed 250,000 children these school meals in 2015. They need funding from the international community to achieve this goal. If they can do this, it would fight hunger and help bring some stability. The Central African Republic needs food and peace most of all, not more guns and fighting.

In war-torn Syria, WFP is planning to feed 500,000 children with school feeding this year. This will be in areas where many internally displaced families have fled the violence.

The WFP vitamin enriched date bars will help boost enrollment and attendance while increasing nutrition levels. Similar programs are already underway in Jordan, Iraq and Egypt where WFP is feeding children who are refugees from the Syrian war.

Haiti, Mali, South Sudan and so many other countries need school feeding to ward of famine and rebuild from conflict and disasters.

The U.S. Food for Peace and McGovern-Dole programs both support school feeding around the world. But these initiatives need more funding.

On International School Meals Day think of this ultimate goal: That every child in the world should receive food and education. Our generation should be the one that makes this wish for children come true.