UFOs are showing up in a variety of places, allegedly on Mars, around Earth, and even in close proximity to the orbiting International Space Station.

Some space enthusiasts seem to have plenty of time on their hands to look at hours of live camera feeds from the ISS. When they spot something they deem to be unexplained, they instantly post it to YouTube. The videos just keep piling up, waiting their turn for reasonable explanations.

On Sept. 11, a video was posted by danielofdoriaa, claiming that NASA's ISS camera caught a huge, elongated UFO with smaller unidentified objects above it.

Was this an alien mothership, ejecting other craft, perhaps on their way down to Earth or outward toward Mars?

Here's the video in question.

"I examined the video and believe that this is, unfortunately, another case of mistaken identity," said Marc Dantonio, chief photo/video analyst for the Mutual UFO Network.

Dantonio's Connecticut-based company, FX Models, creates special effects and models for several U.S. government projects. He can often spot a UFO hoax and, in fact, has built working, flying models that have been mistaken for UFOs (see dual image below). 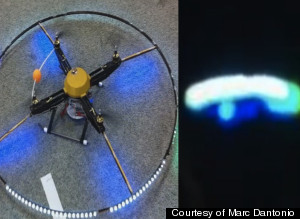 Dantonio isn't suggesting this ISS "UFO" is a hoax.

"I believe this is simply a reflection on the window from inside. The alternative is that we would have to believe the object was SO LARGE that it would not appear to move even as the station was moving at 17,500 miles per hour," Dantonio said.

He offered another alternative -- that the "UFO" was pacing the ISS at some distance and somehow remained out of focus to the camera.

"In both cases, we would have to believe that this 'massive' object was invisible to the crew, but only one guy who was watching the live feed on NASA TV happened to catch it and alert the world."

Even more recently, on Sept. 13, the ISS camera seemed to catch yet another strange object nearby, this one detected and posted to YouTube by someone called myunhauzen74.

In the following video, yet to be analyzed, a bright, pulsating object appears to slowly change its shape and color before eventually fading away.

There's certainly one sure way to satisfy yourself as to whether these or other ISS-related UFOs are hoaxes or something truly unexplained.

Take some time, get in on the viewing action and put your own detective skills and speculation to the test. Go to NASA's live video stream from the ISS and spend a few minutes, hours or days trying to find something unusual that the camera may capture.