When UCLA freshmen arrive on campus in two weeks, an estimated 1 in 10 will be from outside the United States.

UCLA is among the schools with the highest international student enrollment in the nation, and it has rapidly increased its percentage of foreign students in the last several years. This year's projected total is up from 2008, when just 2.3 percent of the freshman class was international, according to figures provided by the school.

The California school's changing makeup is hardly unique: Colleges and universities from Arizona to Illinois have steadily ramped up international enrollment. Experts say schools are courting these young people for reasons both monetary and cultural.

The influx of foreign nationals has been a boon for cash-strapped public universities. Nearly all of these schools have seen their funding slashed over the years, and looking abroad is one way to find young, bright minds willing to pay sticker price for their education.

Between 2008 and 2012, state funding for higher education dropped off by 10.8 percent nationwide, according to the most recent Grapevine report published by the Center for the Study of Education Policy at Illinois State University. Arizona sustained the deepest cuts: Over the five-year period, the state's legislature decreased public education support by 36.6 percent. California schools were hit hard as well, with a 23.9 percent funding decrease in those years.

“It’s kind of common knowledge at this point that state legislators have pulled back on funding for [public] schools,” Eddie West, director of international initiatives for the National Association for College Admission Counseling, told The Huffington Post. West cited a recent Chronicle of Higher Education report that offered devastating projections for the future of higher education funding -- figures so bad that public schools would effectively become privatized institutions, relying on tuition money instead of public funding for support.

“These public schools are facing declining investment from their legislators -- it’s not their college presidents doing this -- so they’re forced to be more entrepreneurial, if you will,” West said.

University of Illinois President Robert Easter told the Chicago Tribune in August that the sizeable percentage of Chinese students at the school -- who this year account for almost 10 percent of the freshman class -- “brings dollars into the state.” The school is another leader in international enrollment, and held freshmen orientation for those students in hotel ballrooms in major Chinese cities this summer.

“That can't be our primary objective, but it does contribute to the state's economy," Easter said.

Indeed, international students contributed $24 billion to the U.S. economy during the 2012-2013 school year, according to figures from the U.S. Department of Commerce.

“The internationalization of the college campus has become very important,” Obst said. “[College] presidents and board of trustee members are looking at [a globalized campus] for the kind of benefit it can provide their students, since not every student is going to get to study abroad."

“Schools are looking to become globally relevant," West said. "Many are seeking nonresident enrollment, whether in the form of out-of-state or foreign students. International students are doubly attractive because they fulfill both motivations.”

Though the sharp uptick in foreign-born students can be a win-win for both the young people and the campus communities where they enroll, West predicts it will also force institutions to reconsider their fundamental missions.

"There’s this perception out there that international students are displacing local students."

“Schools have to be really thoughtful of how they balance their priorities with global students and the local students who are in their mission to serve,” West said. He noted that even community colleges -- once the quintessential locally focused institution -- are stepping up their recruitment efforts of international students.

West added that schools will have to be mindful about how cavalier they are with international recruitment efforts. “You’ll see more schools having focused conversations on this balancing act,” he said. “There’s this perception out there that international students are displacing local students -- in some cases it’s reality, and in other cases it’s just perception.”

California and Virginia are just two states where schools and legislatures are clashing over the perception that local students are being displaced -- or at least held to a higher admissions standard -- than their unsubsidized out-of-state and foreign counterparts.

This fall, a record one-fifth of the freshman class in the University of California system was not from the state, the LA Times reports. The non-Californians will pay $23,000 more a year in tuition, adding some $400 million in revenue to the schools.

UC officials have insisted that local students aren't being displaced by those from abroad, but there's been growing resentment among some Californians for years about the issue.

“There’s no reason why someone from another country should come and take my son’s spot,” California resident Veronica Zavala told Bloomberg back in 2011.

“[UC schools] enroll resident students based on how much money they get from the state,” Clark said. "It’s not a space issue, it’s about who we can get funding for." 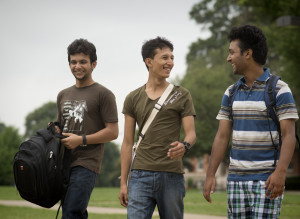 For the international students, American colleges and universities provide access to the best research facilities, professors and networks in the world, Obst said. And for countries like China and South Korea, which have more college-bound children thanks to a rapidly expanding middle class, the U.S. has an “unmatched ability to absorb these new students,” he said.

China, whose students account for an estimated 29 percent of all international scholars in the U.S., has some 2,410 universities, according to a 2012 government-sanctioned study. The U.S., meanwhile, has more than 4,599 degree-granting colleges and universities.

West said schools should be prepared to grow as foreign interest in American schools continues to rise apace.

“Schools have to be sure they’re building on their existing enrollment, building more classrooms, expanding the curriculums and so forth,” West said. “It would be a really unfortunate thing if this almost entirely well-intentioned effort to welcome more international students caused a blowback.”

CORRECTION: A previous version of this story misidentified Arizona State University as University of Arizona.