"We're free, we're naked, it's our right, it's our body, it's our rules, and nobody can use religion, and some other holy things, to abuse women, to oppress them," FEMEN member Alexandra Shevchenko said in Berlin, according to AFP.

"And we'll fight against them. And our boobs will be stronger than their stones," she added.

Tunisian student Amina Tyler sparked a massive controversy in mid-March by posting topless photos of herself on Facebook, with the slogans "Fuck Your Morals" and "My Body Belongs To Me, And Is Not The Source Of Anyone’s Honor," painted on her body.

Islamist hackers responded with an attack on FEMEN's Tunisian Facebook Fan Page, replacing topless photos with quotes from the Quran. An Islamic preacher even stated that Tyler could be stoned for her act of defiance.

"This day will mark the beginning of a new, genuine Arab Spring, after which true freedom, freedom without mullahs and caliphs, will come to Tunisia! Long live the topless jihad against infidels! Our tits are deadlier than your stones!" the group wrote in a statement on its Facebook page.

AFP reports that about two dozen activists showed up in Paris, where FEMEN has its international headquarters. The women tried to reach the Tunisian embassy but were deterred by police.

Five activists gathered near an Islamic cultural center in Brussels, Belgium, Euronews writes. And according to the Gazetta Del Sud, Italian women protested outside the Tunisian consulate in Milan, carrying signs that read "Free Amina" and "Bare Breasts Against Islam."

The Interfax News agency adds that the protests spread to the Ukraine, with police detaining FEMEN activists in Kiev. "The FEMEN activists drove up to the entrance to the mosque in a car, where they were arrested by the police," Interfax cites the police reports.

Activists and journalists have expressed concern about Tyler's well-being in recent days. While her lawyer said the young woman was doing fine, several reports suggest Tyler is being held by her parents in seclusion.

"No, it's not fine. Amina is with her family but that's not 'good news,' as some newspapers earlier wrote," journalist Caroline Fourest wrote in a blog for HuffPost France. "No one close to her, none of her friends or people in her support network have seen her or heard that she was free, free to move and speak," Fourest added. 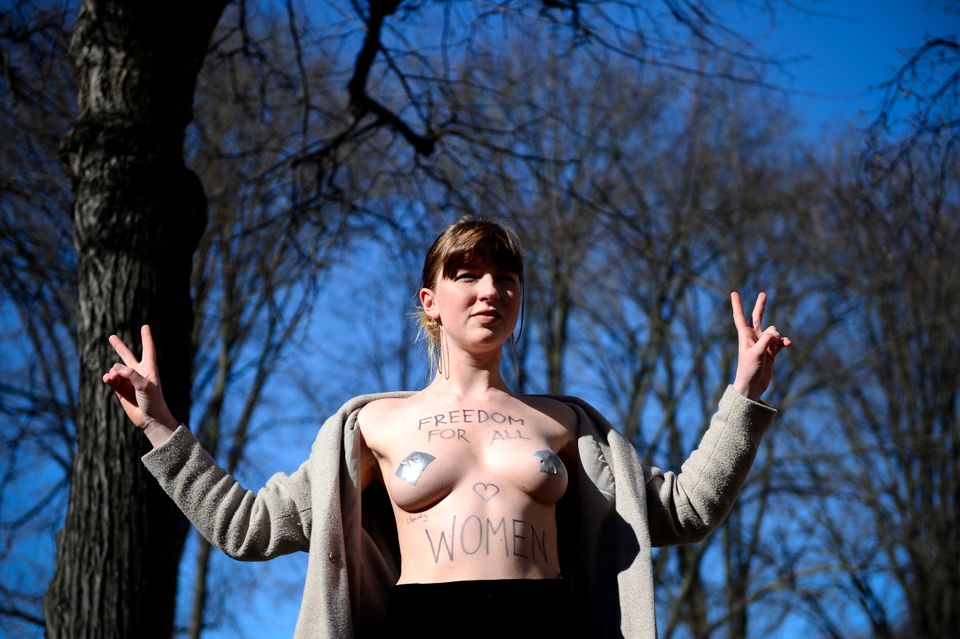 1 / 26
An activist of the Communist Youth Organization alongside women's right movement Femen gestures as she protests topless outside the Tunisian embassy in Stockholm on April 4, 2013.(JONATHAN NACKSTRAND/AFP/Getty Images)
Getty Images