Does anyone remember when Annie Lennox created a scandal by wearing a men's suit, spurring a debate about whether or not she was gay? She knew then what people are still talking about now. The cross-dressing "was about power and politics," she said of her look this week in The Guardian. "It was about saying: 'I'm the same as him' [Dave Stewart, her Eurythmics co-star and former partner]. I'm a female but I have a masculine side and I'm not going to negate that part of myself."

Twenty-five years later Lennox, a lifelong feminist (and my personal goddess for embracing feminism so publicly for decades), astounded by the misrepresentation of feminism and a younger generation's rejection of the fight for women's equality, founded We Are Equals to celebrate the 100-year anniversary of International Women's Day and to create a forum for people to show their support for equality. Women and men. Feminism, as she explains, is "not about the exclusion of men but their inclusion ... we must face and address those issues, especially to include younger men and boys."

That's why March 8th, International Women's Day, is something that boys everywhere should know about it. The last time I suggested allowing boys to have cross-gender empathy, the way we expect girls to, I got a hanging threat. So, I know that for even thinking this I will have another day where at least a handful of people will think I've been possessed by Satan to contemplate the horror of boys being forced to think about girls and their roles in society. This isn't about "feminizing" men or about demonizing them as women-haters. It's about expanding the definition of human to include what is female and about working together to dismantle systematized biases in culture.

Michael Kimmel, a leading writer and researcher on gender, men and masculinity explains it this way:

"In every arena -- in politics, the military, the workplace, professions and education -- the single greatest obstacle to women's equality is the behaviors and attitudes of men. I believe that changes among men represent the next phase of the movement for women's equality -- that changes among men are vital if women are to achieve full equality. Men must come to see that gender equality is in their interest -- as men."

In our efforts to combat inequities we haven't clearly addressed the benefits of equality for boys and men. So, what if I said instead "Gender equity is good for boys"? What about Boys for Gender Equality? Like these young men:

This video was produced as part of a Gender Equality Project at Sydney Boys High School last year. The project concluded with the boys' joint presentation with a local girls' school to 400 business leaders. These boys and their efforts got some flack for "mansplaining," in this case the implications that the "little women" need the help of big strong boys. But, I don't think that's what's happening here. In order for gender equity to happen, girls and boys need to be taught why it is important to them and it's just plain fair when you respect other people's equal rights. That's what these boys are talking about.

Despite very recent debates about the role of men as feminists and as part of feminist movements, the fact remains that girls and women cannot achieve equality without the participation of boys and men. Especially since, regardless of local, regional or national context, men remain in control -- as political, cultural and religious leaders. The thing is, however, that patriarchal social structures are inhuman and, even if they appear to benefit boys and men, there is untold harm done to them as well.

Here are 10 ways in which gender equity is good for boys and men:

10. Freedom from the tyranny of stereotypes.
Gender stereotyping, the backbone of how we transmit sexist cultures, is as bad for boys as it is for girls. Men learn at very early ages lessons about how to be "real" boys and then "real" men. Feminism enables a broad redefinition of what it means to be human -- one that includes, for men, characteristics typically marginalized as "female" like empathy, which inform friendship, fatherhood, marriage and workplace success.

9. Greater academic success.
Studies indicate that boys with an entitled sense of power, based largely on gender, are less likely to do well academically or to try as hard in school. This isn't just a "third world" problem, but evident in the "boy crises" that we often hear about. Feminism isn't to blame -- sluggish culture is.

7. No sole breadwinner workhorse expectations
Feminism, and expanded women's economic rights, enables a more equitable balance of economic responsibilities in adulthood. Gender equity means, on an individual basis, that "becoming a man" doesn't mean being the sole breadwinner or workhorse.

6. Broader range of work and life options
We still live with a highly gender-segregated workforce in which persistent gender pay gaps pervert men's and women's ability to make choices about work and life. Women make up the majority of low-wage and part-time workers as well as the bulk of the teaching, nursing and administrative professions. These professions are looked down on as too "feminine" by many men who might otherwise be good at them or benefit otherwise from having jobs in those sectors. Part of the male mystique is NOT doing these types of jobs -- when men do, they still risk geting "teased and bullied."

6. Less insistence of violence
Traditional hard-line masculinities embrace the enforcement of stereotypes that encourage violence and abuse. In addition, one of the effects of a backlash against feminism in the past thirty years has been an emphasis on physical male strength in media. Excessive caricatures of male bodies -- in cartoons, super-hero movies, militarized action toys and heros and more -- place an imbalanced emphasis on "he-manliness" Boys engaged in championing gender equity learn understanding, respect and personal responsibility.

5. More time with fathers.
Gender equity enables better work/life balance and, since women's entry into the public workspace, fathers are more involved in nurturing their children. In addition to obvious emotional benefits of having dads around more, it turns out that a perceived or real absence of fathers results in a higher likelihood of a boy being a bully. A definite beneficial collateral effect.

3. More time AS fathers.
In order for workplace balance to develop, home-place balance does too. And, despite articles about "chore wars" being over, the truth is that women remain primarily responsible for kids. Many articles celebrating the "end" of chore war debates equate domestic jobs in terms of time but not quality and choice -- there is a big difference between fixing a garage door and being responsible, for example, for a child's diet. Gender equality means that can be involved more equally in parenting. Children thrive in environments based on mutual respect, shared responsibility and equality.

2. Less chance of becoming a father through unplanned pregnancies.
Modern contraception and the development of reproduction rights for women have yielded revolutionary changes, including freedom from the spectre of unplanned fatherhood and motherhood that prior generations of men and women had to contend with.

1. Last, but not least, feminist men and women have more and better sex.
Yup, that's right. Studies, like this one, have shown that men and women who identify as feminists report higher rates of sexual satisfaction. Feminist women are more comfortable with their bodies and with sex in general and feminist men are totally cool with that. Your son will thank you. Probably not out loud.

Feminist fathers, like feminist mothers, grapple with how to deal individually with systemic problems of bias and stereotyping. Boys are taught both implicitly and explicitly that they have power. All they have to do is look around them. What they don't know, as young boys, is that equality is an issue. They often don't believe, like girls, that inequality is real when they start learning about it. It defies logic and often what they are being taught about society as children. If we don't talk to boys it is easier for them to grow up to be men accepting of roles imposed upon them by rigid codes of outdated and stereotyped masculinity and less inclined to believe that gender inequities exist, are persistent and affect not just women but themselves. But boys do care about it when they learn about it. And, they have more influence in changing attitudes about gender with their peers than adults do. They can learn to use their strength for good. 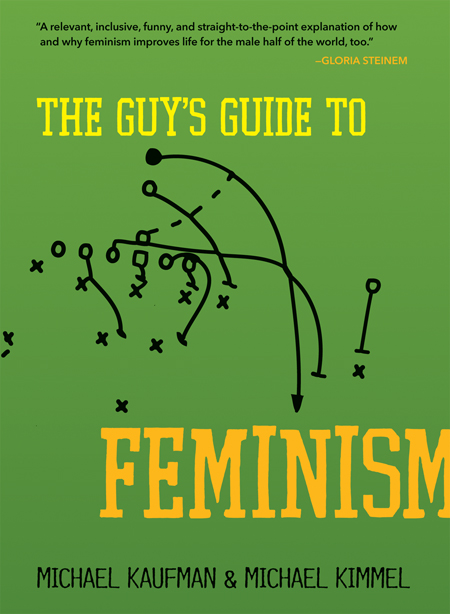 Michael Kimmel and Michael Kaufman address many of these issues in The Guy's Guide to Feminism. The book is made up of almost 100 detailed entries, from "Autonomy" to "Zero Tolerance" that discuss what changes in society, culture and gender roles mean and how to deal with them. This is long overdue. And, frankly, will do better because it is written by men. The book is an easy, entertaining and informative read and makes the clear and compelling case for why feminism can improve the lives of boys and men.

Ignoring feminism or thinking that gender equity is only a "women's issue" -- about girls and not boys -- does boys a huge disservice in preparing them to be men in a transformed world. It's a shocker for some to get out there and realize that they may not be "inherently" in charge and may not want to be. As a feminist, I've spent my entire life thinking about women's roles and there is no way to do that without thinking about men's. There is virtually no aspect of a boy's life that is not and will not be affected by the fight for equality: parental care, work, home, sex, education, health care, child care, war, leisure. The dynamic and fluid relationship that gender roles have means that the definitions of masculinity and men's roles have changed during the past sixty years. And yet, we keep continuing to educate children in terms of gender awareness and critical thinking -- in schools, on screens, in the news, in sweater vests -- about gender roles, in the same way we did in 1960 -- which is to say virtually not at all.

Book cover credit: The Guy's Guide to Feminism by Michael Kaufman and Michael Kimmel. Available from Seal Press, a member of the Perseus Books Group. Copyright 2011.