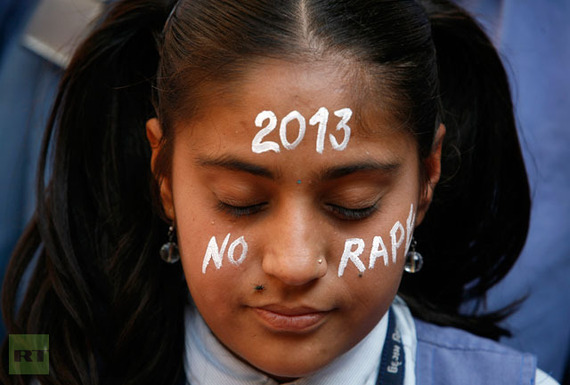 Sexual violence against women in India is widespread throughout the country. Following the tragic Delhi gang rape episode in December 2012, New Delhi, has earned the notorious title of the 'rape capital' of India. It is reported that a woman is raped every 18 hours.

Changing this reality demands a change in mindset, behavior and attitude. But in the short run, it can be reduced by strong gender-sensitized law enforcement combined with swift and uncompromising justice.

A woman in West Bengal was recently repeatedly gang-raped by more than a dozen men at the behest of a local village council leader for the crime of having a relationship with a man from a different community.

But for every case that made the headlines, there are dozens more that have not captured the media's attention, and hundreds more go unreported. It is this lack of concern by those in power which is the unfortunate reality faced by a majority of Indian women.

The police, for example, have generally shown disinterest or insensitivity towards the security of women in the country. A 23-year-old IT professional, from Mumbai, was kidnapped from a busy train station and then raped and murdered. The police refused to register her case for several days and her body was found much later, mostly through the efforts of her own family.

This case is in stark contrast to that of an Indian diplomat arrested, strip-searched and detained in New York, and whose case inspired outrage and action from the Indian Government about the way she was treated. The government rightly pointed out that this was an assault on her honor and dignity. The authorities did not rest until she was brought back to India and instituted a slew of retaliatory measures against U.S. officials serving in India.

What can be learnt from these different cases? Well, for one, the Indian government can act in a quick, efficient and concerted manner when it chooses to, as demonstrated by the incident involving the diplomat; it just does not always choose to.

It's an irony that the concept of honor takes a very high place in Indian society but what is apparent is that the honor and the rights of all women are in no way equal.

Here one must ask why the honor of one woman is held in such high regard when the safety, security and honor of the millions of women who live all across India is ignored. If it is not a matter of capacity and capability, then what does it say about India when the country's government selectively exercises its powers? If India wants to be hailed as a real democracy and a country that upholds the rights of every woman, a poor woman in rural Bihar deserves the same kind of action and urgency as her counterpart in an influential position. The rights and honor of all women deserve -- and must receive -- equal attention, defense and respect.

The real problem is the refusal of India's law-enforcement machinery to take seriously the problems faced by most of the country's women and the fact that they only seem to take notice when the complainant has the connections or the 'status' to move the case to the highest level. Should the average Indian woman then reconcile herself to the idea that she will likely never receive justice, despite the fact that the Indian government has proven itself capable of acting swiftly and decisively, just because of her station in life?

Indian authorities must act in the interest of the security of women regardless of whether or not they are powerful, have moneyed relatives or are one of their own. Until the rule of law along with justice and equality prevails, India's inequality gap will further deepen.

March 8 is an important day in the calendar, but it is rendered meaningless by the grim reality that India is still a state where the rights of women remain vastly unequal; where institutions work to assist those who have money and influence, but remain utterly impervious to the misery of millions of women.

The rights of women must be at the very core of the Nation's ethos. India's law enforcement community must learn to separate justice from political concerns and take seriously their obligation to provide support and protection to the entire population. Helen Clark, UNDP's Administrator, said that " Preventing and eliminating violence against women requires leadership and political will backed by action and resources". This is exactly what India must do.

Only then will the country have a true cause to celebrate International Women's Day.

_______________These are personal views of Siddharth Chatterjee. He is the Chief Diplomat at the International Federation of Red Cross and Red Crescent Societies (IFRC).