Written in Collaboration with Jean Guo

Four decades since the first observance of International Women's Day by the United Nations, the world has witnessed important changes for women, with programs developed to improve their lives and health as well as expanded educational, occupational and leadership opportunities.

However, for millions of women worldwide much more must be done given the complex challenges they face in a rapidly changing global environment and economy. As more than half of the world's population, about 3.5 billion people, live in cities today -- and by 2030 this number is expected to increase to almost 5 billion -- the dramatically evolving urban landscape poses tremendous challenges for women.

One of the major concerns for women in urban areas is safety in public spaces in both the developed and developing world. Sexual harassment and other forms of sexual violence occur every day for women and girls globally. It happens on streets, in and around schools and workplaces, in parks, in public sanitation facilities, and in neighborhoods. Violence and sexual harassment in public spaces restricts women's freedom of movement, reduces their access to essential services, and negatively impacts their health and wellbeing. Domestic violence in the home is a widely-recognized issue today with an estimated 1 in 3 women experiencing physical or sexual abuse by a partner or family member, but violence against women and girls in public spaces is often neglected in communities.

According to a report by the Centre on Housing Rights and Evictions (COHRE), which surveyed women and girls from over 20 different slum communities around the world, violence against women is rampant in these areas of cities. A survey of 4500 women and 1600 men living in the slums of Dhaka, Bangladesh found that 76 percent of the women respondents had endured physical or sexual abuse during the past 12 months, with 43 percent having suffered both physical and sexual abuse. Kibera, the largest slum in Kenya, was one of the hotspots for violence in the aftermath of the country's 2007-2008 post-election conflict. In fact, the Nairobi Women's Hospital Gender Violence Recovery Center reported that 90 percent of the rape cases being treated there during the conflict were from gang rapes. These statistics show that megacities (urban areas with populations of more than 10 million people), which are experiencing the fastest urban growth, also correlate geographically to regions where rape regularly occurs (see maps below). 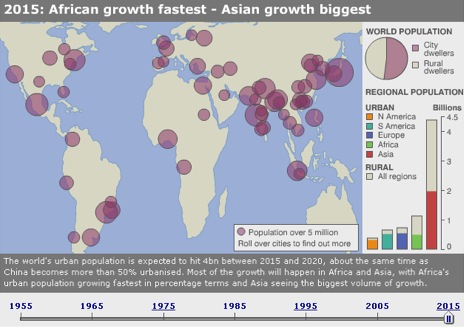 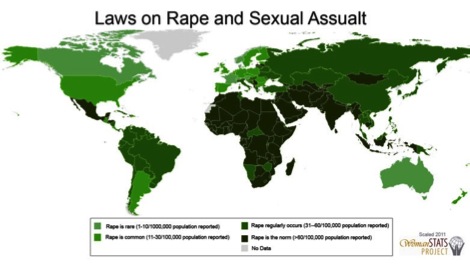 What is most disturbing about these figures is that many women migrate to cities in order to escape from domestic violence and health-damaging cultural practices, yet these threats persist in cities or women may experience a complex set of new challenges including a lack of access to services, housing insecurity, and employment discrimination.

Furthermore, while urban growth is occurring fastest in Asia and Africa, the issue of equal access to and safety in public spaces is not localized to these regions. Far from it, this problem is a significant issue for women in countries in Western Europe and North America. A 2012 poll conducted in London found that 43 percent of young women had experienced street harassment in the past year. In France, a 2013 study revealed that 1 in 4 women experienced fear when in public spaces and that 1 in 5 was verbally harassed while walking on the street in the past year.

Another key component of the initiative is tailoring solutions to the needs of each community, as social and cultural factors have an important impact and can present barriers to achieving equal access to and safety for women in urban public spaces worldwide. Each of the cities discussed above used different approaches to address this issue. New Delhi has worked to strengthen community collectives of women and youth in several of its municipal wards. In Quito, a 10,000-strong letter-writing campaign was launched that resulted in the city government revising an ordinance on violence against women to include prevention of violence in public spaces. Local authorities in Port Moresby, Papa New Guinea, began collaborating with women's market vendors' associations in response to the violence that women experienced in these venues.

Finally, improving access and safety for women in public spaces requires a health-in-all policies approach that mobilizes all sectors of society. An assessment is needed to identify vulnerable populations in order to design effective solutions. For instance, poverty and aging are risk factors for women. The poor are more likely to be exposed to health hazards, which range from a lack of proper hygiene and sanitation to inadequate transportation, limiting their access to health care and other resources. Urban areas tend to isolate seniors, a greater proportion of whom are women, who have limited income and poorer health..

The most effective solutions address the issue comprehensively, harnessing strategies and resources from multiple sectors to improve the health and wellbeing of women living in urban area. For example, in Rio de Janeiro, Brazil, policymakers are working to identify safety risks in ten of its largest slums. Local authorities are partnering with women and girls in their communities to map with mobile phones safety risks such as defective infrastructure, obscured walking routes, and deficient lighting. By improving infrastructure including transportation services, the city can better protect the safety and wellbeing of its vulnerable populations. The city of Vienna, Austria has been a pioneer in its efforts to make urban planning more gender-inclusive. Improvements range from additional installed lighting and safer underground car parking to more sport-specific public parks and an innovative apartment complex -- "Women-Work-City" -- built to target to the unique needs of working women by providing services and shops all in one place.

Since its launch in 2010, the UN Safe Cities Global Initiative has expanded to more than 15 cities around the world and is continuing to grow as more cities commit to creating safe public spaces for women and girls. Dublin, Winnipeg, and Los Angeles are several of the cities that have joined the Safe Cities initiative. However, the need for greater multi-sectorial involvement is critical: Engagement with organizations and individuals within the entire community is necessary for progress to occur.

At the UN General Assembly in 2012, President Dilma Rousseff of Brazil, underscored, "For many, we women are 'half the sky.' But we also want to be half the earth with equal rights and opportunities, free from all forms of discrimination and violence." Looking ahead, much work still needs to be done so that women can safely live and prosper in cities and also have a stronger voice in the design of their communities. On this International Women's Day, it's time to rectify past inequities -- after all, women's rights are human rights -- and ensure that women and girls can live in cities with safe public spaces where they can flourish now and into the future.

Rear Admiral Susan Blumenthal, M.D., M.P.A. (ret.) is the Public Health Editor of The Huffington Post. She is the Senior Policy and Medical Advisor at amfAR, The Foundation for AIDS Research in Washington, D.C. and also a Clinical Professor at Tufts and Georgetown University Schools of Medicine. Dr. Blumenthal served for more than 20 years in senior health leadership positions in the federal government in the Administrations of four U.S. presidents including as Assistant Surgeon General of the United States, the first Deputy Assistant Secretary of Women's Health, and as Senior Global Health Advisor in the U.S. Department of Health and Human Services. She also served as a White House advisor on health. Prior to these positions, Dr. Blumenthal was Chief of the Behavioral Medicine and Basic Prevention Research Branch and Chair of the Health and Behavior Coordinating Committee at the National Institutes of Health. She has chaired numerous national and global commissions and conferences and is the author of many scientific publications. Admiral Blumenthal has received numerous awards including honorary doctorates and has been decorated with the highest medals of the U.S. Public Health Service for her pioneering leadership and significant contributions to advancing health in the United States and worldwide. Named by the New York Times, the National Library of Medicine and the Medical Herald as one of the most influential women in medicine, Dr. Blumenthal was named the 2009 Health Leader of the Year by the Commissioned Officers Association and as a Rock Star of Science by the Geoffrey Beene Foundation. She is the recipient of the Rosalind Franklin Centennial Life in Discovery Award. Her work has included a focus on HIV/AIDS since the beginning of the epidemic in the early 1980s.

Jean Guo, B.A./B.A.H. graduated from Stanford University with degrees in Human Biology and Economics. With an interest in public health, economics, and policy, she has previously conducted research on the oral polio vaccine at the Stanford University School of Medicine, worked as a medical intern at a neurology clinic in Paris, and consulted for the Pan-American Health Organization.