Have you ever thought about where now-ubiquitous semi-words like "OMG" and "LOL" come from? Sure, they've been sanctified by the Oxford English Dictionary as totally legitimate, but it's often difficult to figure out how, exactly, they began. Even web historians -- some of whom get paid to study this stuff, people -- occasionally dispute these well-known words' origins.

Meaning: "laughing out loud"
Variations: lul, lulz, lolz, lollerskates
Example: You have to see this video of a corgi puppy trying to get down a flight of stairs. I LOLed so hard!

Before it existed online, "LOL" was common in letter-writing. The pre-Internet version of the acronym meant “lots of love” or “lots of luck."

The online use of LOL might date back as far as the early '80s in Calgary, Canada, when then-student Wayne Pearson coined the term with friends on Viewline, a bulletin board system that was a sort of rudimentary chatroom. Or so he claims.

“I always emphasized (and still do) that it was meant to be used *only* if you truly Laughed Out Loud,” Pearson wrote in a post crowning himself the inventor of LOL.

Lexicographer and netspeak historian Ben Zimmer told PCWorld that the first documented mention of LOL comes from a May 1989 newsletter called FidoNews -- still distributed by the computer network FidoNet today -- which listed it as a commonly used Web acronym.

The newsletter is archived in full at TextFiles.com, but you can see an excerpt below: 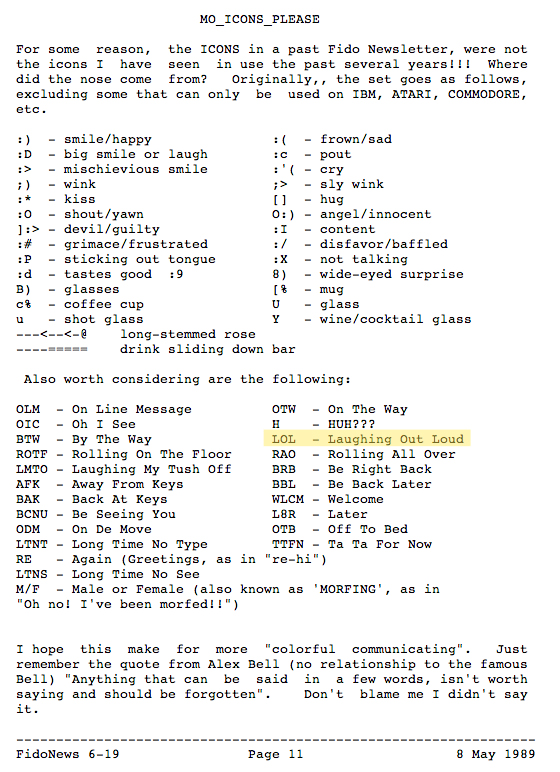 By 1989, the acronym "LMTO," or “laughing my tush off," was already around, according to FidoNews. A year later, its more crass counterpart was supposedly coined, appropriately enough, during an online "Dungeons & Dragons" game, Slate podcaster Mike Vuolo reported.

According to Vuolo, “Torquin (an elven male Ranger) typed ‘LMAO!’ after Sayaka (a human female Monk) suggested that Daldin (a dwarf male Fighter) might want some hijiki for lunch. (I guess you had to be there.)” Sounds about right.

Even before the Internet, misanthropic youth liked to talk about "laughing their asses off." In J. D. Salinger's The Catcher in the Rye, the novel's main character, Holden Caulfield, described a movie he saw like this: “It ends up with everybody at this long dinner table laughing their asses off because the great Dane comes in with a bunch of puppies."

ROFL and its variants, including ROTFL (the “T" is for “the”) and ROTF (which does away with “laughing” altogether), date back to at least 1989, when it was apparently first used in a post on Usenet, an early Internet message board, in a group discussing amateur radio. Someone nicknamed “Chuq” apparently ROFL'd when another person didn't know what "RTFM," or "read the fucking manual," meant.

ROTFLOL, which combines “rolling on the floor” with “laughing out loud,” is probably nearly as old, archived here in a 1992 post to the alternative rock forum on Usenet. (There’s also an amusing debate over whether Axl Rose’s name is a deliberate anagram for “oral sex” or just a happy accident.)

In a post on the blog Language Log, language historian Ben Zimmer says he found the earliest instance of "WTF" in a 1985 Usenet post titled “Ramblings.”

Other variations on "WTF," in which the "W" stands for “who,” “where,” “when,” “why” and “whatever,” appear in Usenet posts from the mid-'80s onward, according to Zimmer.

Meaning: "you only live once"
Variations: #YOLO
Example: I downed 15 shots last night and then had to go to the hospital but whatever, YOLO.

Sorry, but you can’t pin the existence of "YOLO" on Drake. The Canadian rapper may have popularized the acronym in his song “The Motto,” but the phrase has been in use since at least the 18th century, when Johann Wolfgang von Goethe used an expression translating to “one lives but once in the world” in the play "Clavigo." Johann Strauss II also titled a waltz “Man lebt nur einmal!” (“You only live once!”) in 1855.

In the mid-80s, Grateful Dead drummer Mickey Hart named his California ranch YOLO, also after the motto “you only live once," Hart told Vanity Fair.

Even the acronym's modern exposure dates back further than Drake to at least 2004, when Adam Mesh, a former contestant on the reality show "Average Joe," printed the phrase on a line of T-shirts.

In November 2012, for reasons we can’t fathom, the Oxford American Dictionaries included YOLO its shortlist for the 2012 English Word of the Year. It lost out to another acronym, GIF (Graphics Interchange Format).

This acronym goes way, way back to 1917, when 75-year-old John Arbuthnot Fisher, First Baron Fisher of Kilverstone, sent a letter to Winston Churchill that concluded, “I hear that a new order of Knighthood is on the tapis -- O.M.G. (Oh! My! God!) -- Shower it on the Admiralty!” (Meaning: “Knight me, please!”)

In other words, even a century ago, OMG was used to say things like, “OMG I WANT!” 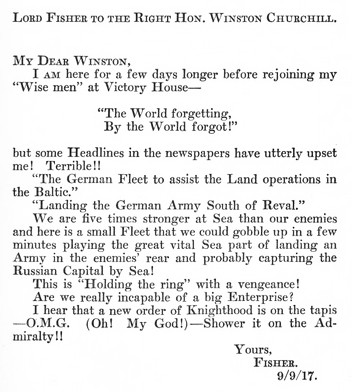 OMG’s online use dates back to at least 1994. The Oxford English Dictionary traced it back to a post on a Usenet forum about TV soap operas that reads, “OMG! What did I say?”

Meaning: "fuck my life"
Variations: FMFL
Example: Today I was finally going to redeem my free frozen yogurt voucher at my favorite FroYo place. Then I found out it was shut down because of a rat infestation. FML.

According to Know Your Meme, "FML" has had an Urban Dictionary entry since 2005. But the expression entered the mainstream with the success of Judd Apatow’s 2007 comedy "Superbad."

In this throwaway scene, "McLovin" (played by Christopher Mintz-Plasse) spoke with a morose cashier who utters the famous words:

Interest in the acronym spiked with the 2009 blog FMyLife, where people could submit their own “my life sucks” stories, typically beginning “Today I…” and concluding, “FML.” Like these ones:

The creators of FMyLife are also responsible for the French version of the site, called “Vie de merde” (VDM), which literally translates to “Life of sh*t." That means the same thing, more or less.

Meaning: "for the win"
Variations: FTW (where the acronym stands for "fuck the world")
Example: Found a frozen yogurt place a block away, and this one’s rat-free. FTW!

You can thank the long-running game show "Hollywood Squares" for the phrase "for the win." Contestants on the show would have to say the expression when selecting the winning “square” in the tic-tac-toe-inspired show.

But it was in the early 2000s when the acronym "FTW" popped up in the online role-playing game "Dark Age of Camelot," according to a post on StackExchange, an online forum for linguists and etymologists. Someone using the online handle “Hugo” traced the expression back to a 2003 "Dark Age of Camelot" forum, where a user wrote, “Norway FTW!”

This angry little acronym is said to have originated among soldiers in World War II, used in response to redundant questions from a new recruit, according to Know Your Meme. But its earliest confirmed usage as a tech term came in 1979, when it was used in -- you guessed it -- a manual for computer programmers.

Meaning: "too long; didn’t read"
Variations: TLDR
Example: Can someone give me all of 20th century U.S. history in TL;DR format? I have an exam in an hour.

There’s no better sign of our times than Internet shorthand that demands writing be as short as possible. "TL;DR" likely originated on the comedy forum Something Awful around 2002, and spread to other online forums like 4chan, Slashdot and Reddit. The first Urban Dictionary definition for TL;DR appeared in 2003, and it earned its own Wikipedia page in 2007.