It was a late summer evening and I was meeting an anonymous man in an empty parking lot in order to buy a fraction of something called a bitcoin. The reason: because it's the primary currency of online black markets. The most infamous black market is a website called the Silk Road where about any illicit drug can be purchased anonymously but it's only the tip of the iceberg. Silk Road is the reason I was purchasing the bitcoin but I wasn't after drugs or contraband; rather, I was buying information. I wanted to map the online underworld and was therefore buying lists of links to other black market sites.

Over the summer I had amassed a list of "hidden services" like Silk Road, which require the use of Tor software -- an acronym for The Onion Router. Tor allows users some degree of anonymity by encrypting communications and relaying internet traffic through multiple proxies worldwide in order to mask users' locations as well as hide servers that host hidden service websites.

The eBay of narcotics -- Silk Road -- wasn't hosted on Freedom Hosting's servers and remains active as I write this article. Silk Road allows vendors to sell contraband to users. The identities of both vendor and customer are anonymous except for their chosen pseudonymous screen names. Silk Road also holds payment in escrow until the buyer confirms delivery of the product they ordered. Buyers can leave feedback on sellers; thus sellers can develop a reputation -- a brand. Silk Road also shows the number of purchases a buyer has made under a given screen-name. Some vendors won't sell to buyers without a history or ask that they make small purchases before buying anything significant from them. Sellers, on the other hand, can be assured that a vendor with 300+ positive customer feedbacks is a safe bet. In short, Silk Road has created a system of trust in an area susceptible to scams. Unlike some other market places, Silk Road forbids the sale of child pornography, murder for hire, stolen credit card accounts, forged currency, and weapons.

Prior to August 4th I had compiled a list of several hundred hidden websites that advertised such products and services as forged U.S. currency and supposed hit services. Though some of the sites on my post-August 4th list continue to work; most do not. I wondered: are there active sites that I don't know about that are still offering such services and products? This is why I was meeting an anonymous man to buy a fraction of a bitcoin. I would purchase the information.

Bitcoins are a digital cryptocurrency that have become a symbol of online anarchy; readily traded by techno-anarchists and financial speculators, their value has steadily risen against the U.S. dollar over the last two years. Though it's possible to buy them online; new regulations make it harder to exchange them hassle free because they are treated as financial instruments. PayPal also has a policy against using PayPal accounts for purchasing bitcoins because of rampant fraud.

Rather than deal with the hassle of proving my identity or deal with shady online exchanges, I chose to deal with a physical person in a cash transaction. I arranged the exchange through an online forum that facilitated local face-to-face transactions. I expected either a shady technologically savvy gangster or a geeky kid. The man I met seemed neither; he was preppy and fit -- possibly an athlete -- in his late twenties or early thirties. I imagined him working in a bank or in a white-collar semi-managerial position. He finalized the transaction from his iPhone and provided me with a secret code that confirmed that .36 of a bitcoin was sent to my online bitcoin wallet. No questions asked.

I purchased two lists of "working underground links" on the Silk Road in order to compare them with my working links from my post-August 4th list of hidden services. One list was never delivered. Perhaps I spooked that vendor by asking them to send their list to my non-anonymous email. I'm not too concerned because it wasn't too expensive and the money is in escrow and will be refunded if the list isn't delivered (assuming the site isn't shut down by the DEA before my money is refunded). The other list I purchased provided about a 100 links, all of which worked. I was familiar with about a quarter of the sites. That vendor even went as far as to claim that he only included actual and dependable services.

The new list provided nothing unexpected. The links are the same types of claims the casual browser comes to expect after spending any amount of time surfing the dark web. Nonetheless, it's important to identify any and all websites offering illicit products or services. The following paragraphs describe a few examples of specific advertisements I've found while surfing the hidden web.

On a forum called BlackHat BackMarket Data Board someone claiming to be a white woman in her early thirties placed an advertisement saying she wants a "psychopath" to abduct her. She further elaborates that she is "strong-willed" and "fairly bright" but nevertheless wants to be abducted by someone who will put her into "sexual slavery" and attempt to induce Stockholm Syndrome in her. Could it just be that she is kinky and into bondage, wanting to hookup with someone willing to create the fantasy? But the advertisement also adds that any attempt to use her forum post as a legal defense will be "impossible." Innocent or not, what's certain is that such forums are havens for anti-social personalities and the possibility of finding a willing psychopath is real. Perhaps the danger doesn't really concern the advertiser. I wonder: how can the would-be-abductor know that the post isn't a set-up on someone else?

On a site called BlackMarket Reloaded a user named Torrunner sells counterfeit U.S. bills at a price of approximately 25 percent of their face value. Torrunner recommends that new purchasers also buy a publication called The Guide for Passing $100 Counterfeits. Over sixty buyers have left mostly positive feedback on Torrunner's counterfeits. Another website, called USJUD, sells $20 counterfeits "made in Asia," which they claim are the very same as those dubbed by the U.S. government as "superdollars." USJUD not only lists the positive qualities of their fakes, such as possessing a security strip and passing the pen test, but also describes weaknesses such as generally not passing the infrared test and possessing a limited range of serial numbers.

For $2,500 an anonymous buyer can purchase a fully automatic AK-47. Though many "hidden services" are likely scams; sites like BlackMarket Reloaded -- where this particular AK-47 is for sale -- hold payment in escrow until the purchaser confirms possession of the product. In this case, the seller doesn't have any feedback on the item but as a vendor he has three positive ratings and the only items he has for sell are weapons. 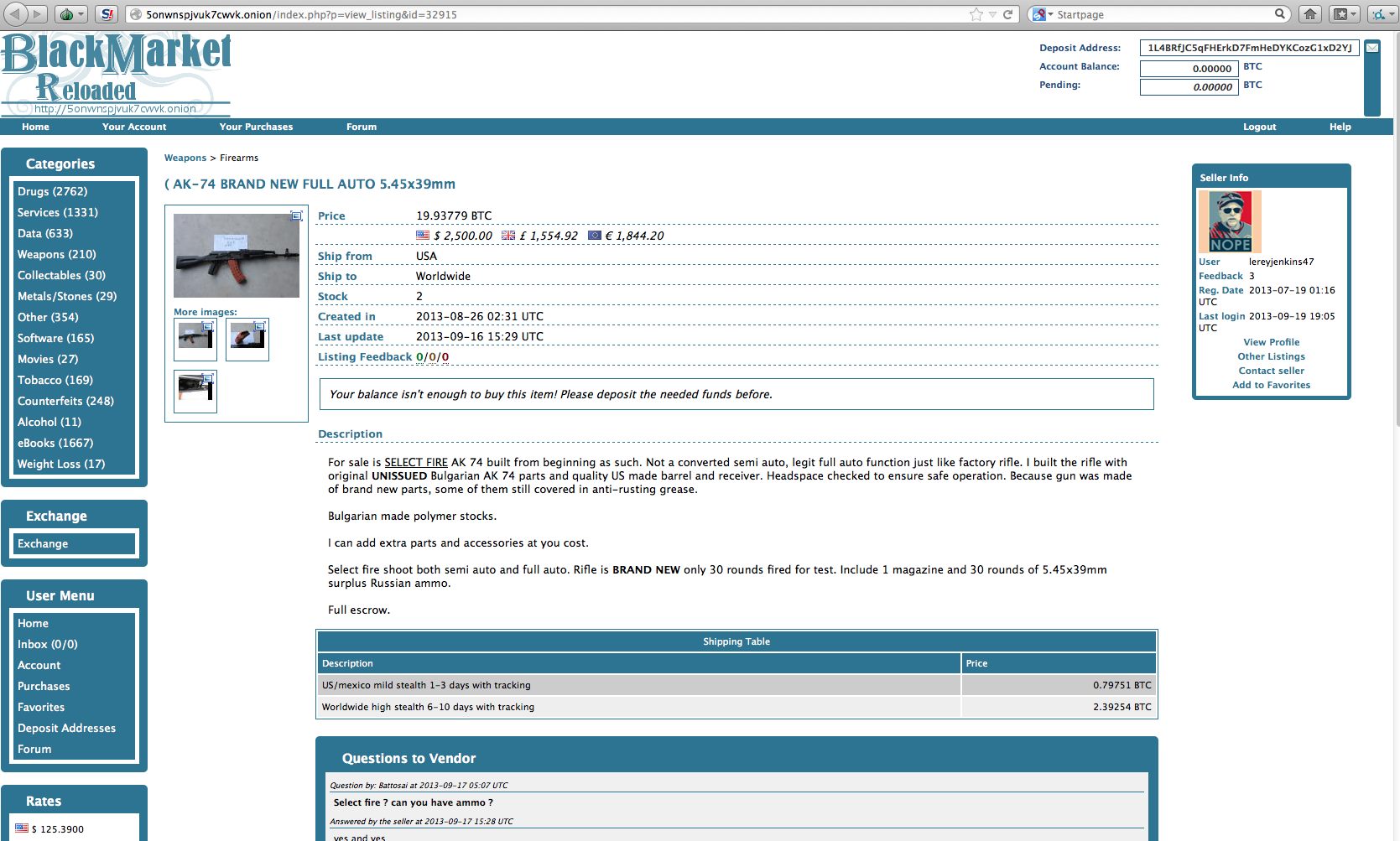 On a forum called HackBB a user named Nuclear posts that he wants to hire a hacker to break into the University of Houston system and add a person as "graduated this fall semester." Another user named Maddog responds, "PM me." On various forums hackers offer up services ranging from cracking emails and Facebook accounts to launching denial of service attacks against websites. The ability to buy hacked PayPal accounts, credit card accounts, and eBay accounts for pennies on the dollar is well known in the anonymous dark-web. Some vendors offer to sell accounts on escrow and guarantee that a certain percentage of accounts will be active.

Several hidden sites advertise contract murder. The average price is $10,000. Though I admit skepticism; perhaps they are wannabe kids or even fraudsters. Notwithstanding, wannabes can cross the line and become the real thing. More unnerving is the fact that there are people in this world who will kill for money and there are certainly people who would pay for such a service. Though Tor isn't invulnerable; The Onion Router has utility for electronic counter-surveillance if used with other techniques. A real or would-be hit man could very well utilize the technology to advertise his or her services. Needless to say, there is no ethical way to test the willingness of such advertisers.

While it's impossible to ascertain whether the personalities behind the advertisements for contract murder are willing, sites like Silk Road are reputable. Earlier this year, investigative journalist Andy Greenberg of Forbes purchased small quantities of marijuana from three sites: Silk Road, Atlantis, and BlackMarket Reloaded. Of the three purchases he made, only one order failed to arrive. He suggests that that one package could have easily been confiscated by customs because it was coming from Holland. While Andy purchased marijuana, the product could just as easily have been heroin or meth. What's more, sites like Silk Road and BlackMarket Reloaded allow buyers to purchase with a certain degree of trust because of the escrow and feedback they facilitate. Reputable with buyers and globally accessible, such sites seem to herald the new face of organized crime.