For a world so big--people have never seemed to stop asking themselves the basic question of "How do I meet other people?" When you live on a planet of seven billion, a part of you just wants to say, "Just walk outside! That's it." But it never really seems to be that easy; especially in the age we live in where people feel more comfortable with a virtual interaction than one of the physical form. In fact, it would seem that the more comfortable we become with meeting people online, the more fearful we are of having basic human interactions.

There are two ways to meet a romantic partner in this age. The first is simple, through a mutual friend. In this situation it tends to be preferable if the seed for a romantic relationship is planted before or very soon after the first meeting of the two parties. This way, the risk factor is much lower. Nobody is interested in making a move, they want the move to be mutual and they want it confirmed four times before they make it that the other person is equally as interested in them.

The second way is, online. The online dating risk factor of rejection is much lower than the one in real life. If you meet someone on a dating app and go on a date, you both know from the conception of your relationship that some kind of romantic element is involved. This way, even if one person may ignore the other's advances or decide they don't want to continue seeing that person--you will always have the option of rationalizing your rejection as the other person's fault. "He was annoying anyway!" "I never actually thought she was pretty." "He was stupid and had a booger hanging out of his nose I'm pretty sure." 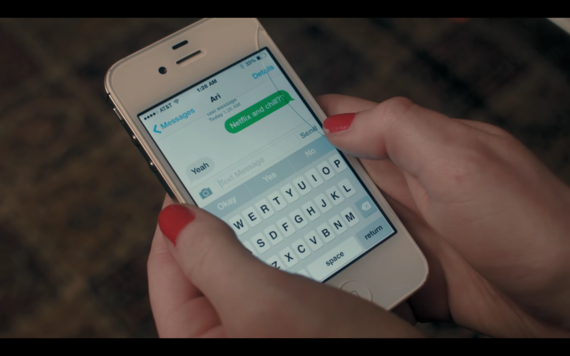 Once you've agreed to go out with this person you truly know nothing about, now you have to figure out what to do with them--this is where "Netflix and chill" comes in. The idea of watching Netflix is already a crowd pleaser, but on top of that it's very cost effective. When two people get together to watch something, if they have the same taste and the same desire to put on Master of None episode four--it's borderline titillating. That's all young people want--they want someone who wants to do nothing with them; someone who has the exact same taste and the exact same misplaced pretention, and if someone can match that, it's sexy sexy time.

The second the TV goes on, the two people will immediately be hit with the overwhelming reality that they have absolutely nothing to say to the human being four inches from them. This is when they will completely stop being able to follow to Fargo, which is exactly why they had chosen a movie they'd seen fourteen times already. Then, when the sound of the TV can no longer be heard over the blaring awkwardness--someone will go for it.

There are many reasons to make the first move, attraction, a deep hatred of whatever you're watching, you made plans after and it's starting to get late, or even just plain curiosity. Then, if the other person is very into it, they'll have sex--if not, there will be some uncomfortable handsy situations and then they'll say, "This was fun." and make a run for the door.

With this film, I wanted to take this generation defining concept and completely flip it on its side. I wanted to create the "Netflix and chill" that exists in every sap's mind when they're watching Love and being fondled. We've gone completely out of our way to make things as easy for ourselves as humanly possible, but in doing so we may have lost some of the magic. We used to date someone because we liked him or her, because they evoked some kind of exciting new energy in the middle of our stomach; now we're running in the opposite direction of that person and powering up our phone.