UPDATE: The BBC is reporting that the survey appears to be a hoax, and the AptiQuant website only recently set up. We have reached out to AptiQuant for comment.

-- PREVIOUSLY: Are users of Internet Explorer the dumbest on the Internet?

Findings from a survey conducted by Vancouver consulting firm AptiQuant suggest just that. The company gave IQ tests to over 100,000 people, found randomly through user searches and targeted advertising; the test-takers did not know they were being judged based on what browser they were using.

Though no significant differences were found across the IQs of Chrome, Firefox, and Safari users, the study did find that “subjects using any version of Internet Explorer ranked significantly lower on average than others.” Ouch.

Here is the damning chart: 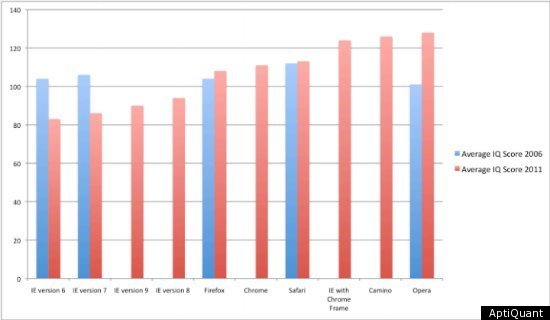 A few things to note here. First, Internet Explorer users--especially those who have not upgraded to the speedier IE9--rank lower than their fellow Chrome, Firefox, and brainiac Opera web surfers. Is there a correlation between not updating your browser and intelligence? AptiQuant thinks so: “From the test results, it is a clear indication that individuals on the lower side of the IQ scale tend to resist a change/upgrade of their browsers.”

I would submit that some who haven’t upgraded aren’t “resisting,” but rather don’t know that it is an option; whatever the reason, those using older versions of IE do rank lower on the IQ scale.

Second, what’s gotten into Opera users? After barely cracking the median 100-point IQ barrier in 2006, Opera-goers now have the highest IQs amongst all web surfers. Opera is the worldwide leader in mobile web browsing, though it lags far behind Internet Explorer, Firefox, Chrome, and Safari in web browsing, according to an August 1 report by web tracking service NetMarketShare. Opera saw about 1.5% market share of worldwide usage, while Internet Explorer led the way with over 50%.

In response to the findings, offended Internet Explorer users have apparently sent hate mail to AptiQuant CEO Leonard Howard and threatened the company with a lawsuit. Even if IE users may be a bit dumber on average, at least some of them know how to email and litigate.

A spokesperson for Microsoft declined to comment, and an AptiQuant rep did not respond to a similar request. Disclosure: This report was filed in Google Chrome.