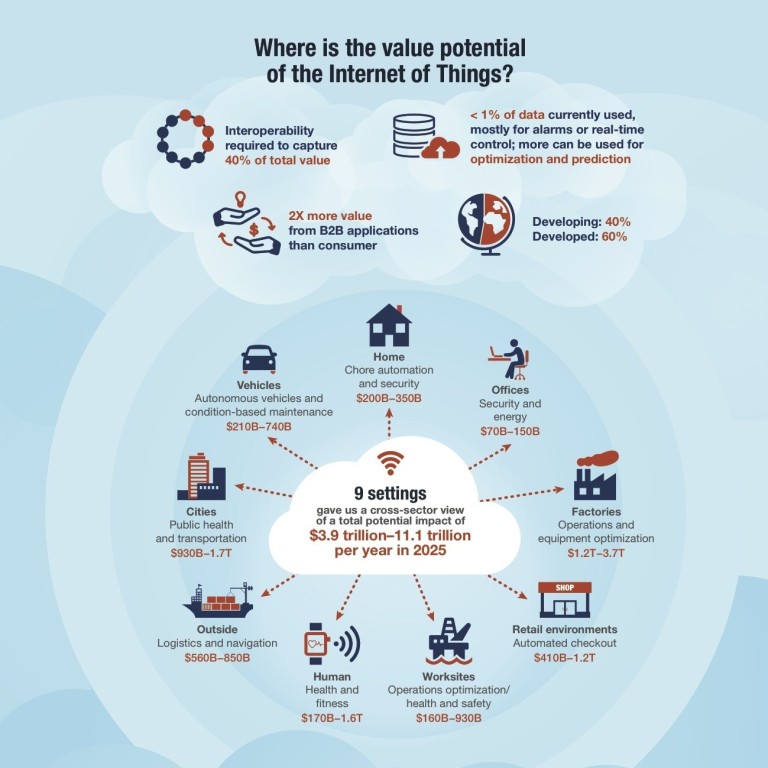 Creating the "Internet of Things" by connecting everyday objects like factory machines, vehicles and buildings to the web could be worth between $3.9 trillion and $11.1 trillion by 2025, according to a new report from the McKinsey Global Institute.

McKinsey's research suggests that connecting many more devices and sensors to the Internet has immense potential to increase corporate revenue, create new businesses and improve firms' decision-making. To estimate the dollar value, the researchers examined hundreds of cases where devices are being connected to the web, factoring in improvements in technology and increasing connectivity over a 10-year time frame. The McKinsey report also highlighted situations where adding connected sensors to buildings, bridges and lights helped improve environmental conditions.

The report explains that the Internet of Things "makes it possible to monitor and manage operations thousands of miles away, track goods as they cross the ocean, or detect changes in the blood pressure of a diabetic that might be a sign of a heart attack."

Michael Chui, a partner at the McKinsey Global Institute and co-author of the report, noted how increased connectedness could impact cities for the better, with benefits to infrastructure like sewers, electrical grids and transportation systems. For example, connected sensors on streets or in water distribution systems could monitor changes in air quality or detect leaks, and that data could in turn be used to guide urban planning and public health policies.

"I think people are starting to understand all of the incredible impacts the Internet has had on business, their personal lives and the ways we can interact with government," Chui said. Now, he explained, "We are extending some of the power, speed and scope of the Internet, not just to our online lives but to all of the physical things we do. It is transforming how we combine the physical world with online and bringing it all to new domains." 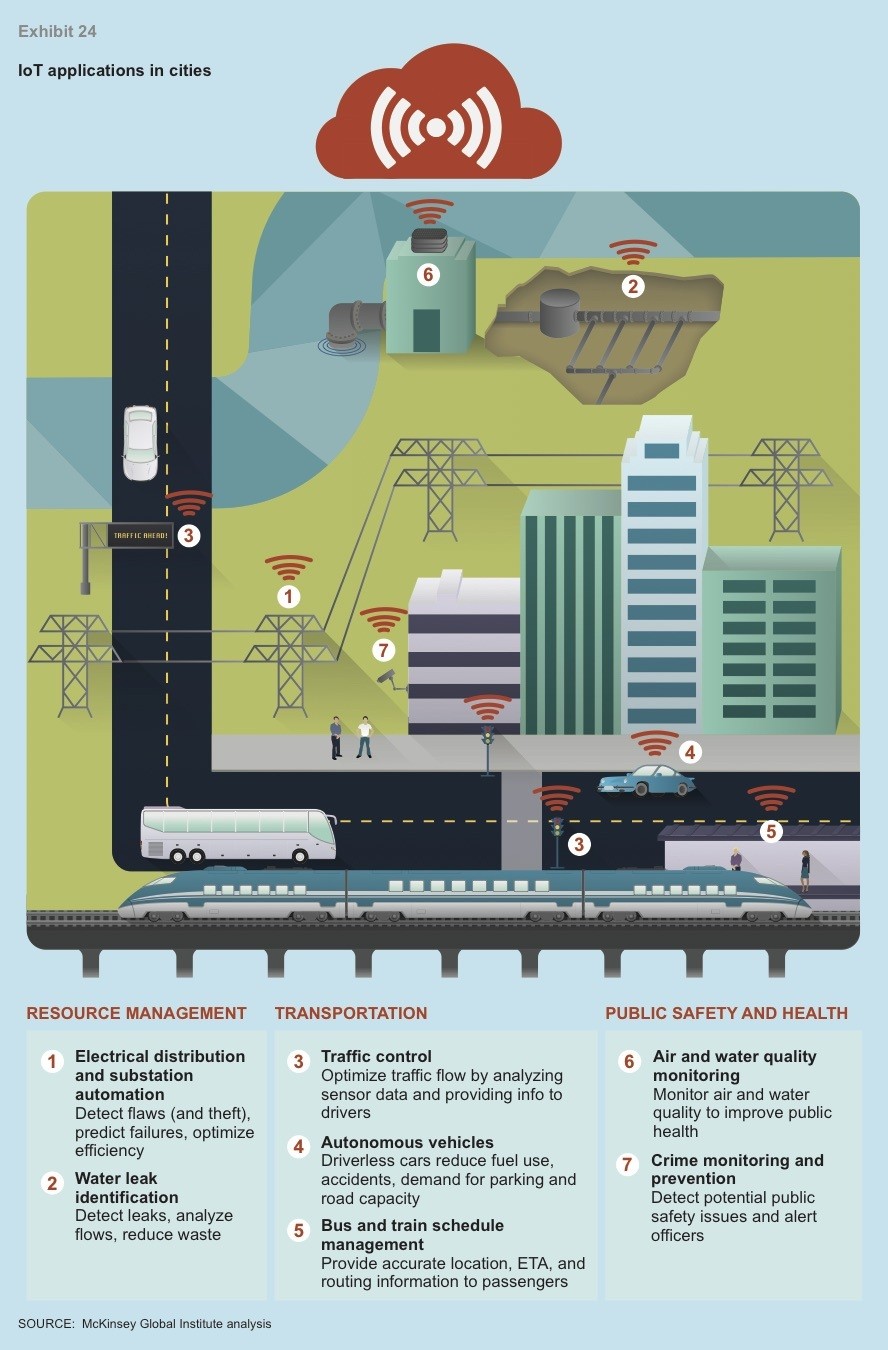 But it's not just governments that would benefit from the Internet of Things. Bringing more devices online could save people time, reduce the costs of goods and services and even lead to longer lifespans, the researchers said.

There are some downsides to the idea of connecting more things to the web. For one, companies that don't adapt to this brave new world might get left behind -- the report notes that early adopters of the "Internet of Things" strategy might achieve lower operating costs and win new customers.

There's also the issue of interoperability, where devices need to all communicate correctly and seamlessly with each other, software and networks. For a concrete example of why a lack of interoperability can be a huge problem for consumers and businesses, look no further than the issues around sharing digital medical data.

"If you look at all the estimated value created by the Internet of Things, not just for companies but improved quality of life or longer life, 40 percent of that potential required interoperability," Chui said. "Systems have to talk to each other for the data to be combined. In some cases, it's even higher: Sixty percent of predictable maintenance and repair issues on oil platforms require interoperability."

To combat this issue, the researchers suggested using open standards that are shared between software companies and manufacturers, similar to those that have been adopted in the energy industry in recent years.

As more data is collected about people's movements, health, interactions and transactions, the public needs to be educated about the Internet of Things, particularly how the data generated from it will be collected and used. Just as it's become clear over the past decade that the general public needed to know about the Internet to log on and fully benefit from it, we'll need to understand this new layer of connectivity in the decade ahead.

"Some of the most important risks are around cybersecurity," Chui explained. "Number one, many, many more devices are connected, which means there are more ways to breach security and cause problems. Number two, the consequences of a breach become more perilous. If you could hack a million driverless cars or control a chemical plant, those are risks for which the consequence of a negative incident are catastrophic. We need to invest appropriately and have a full dialogue. Awareness and understanding are the first step." 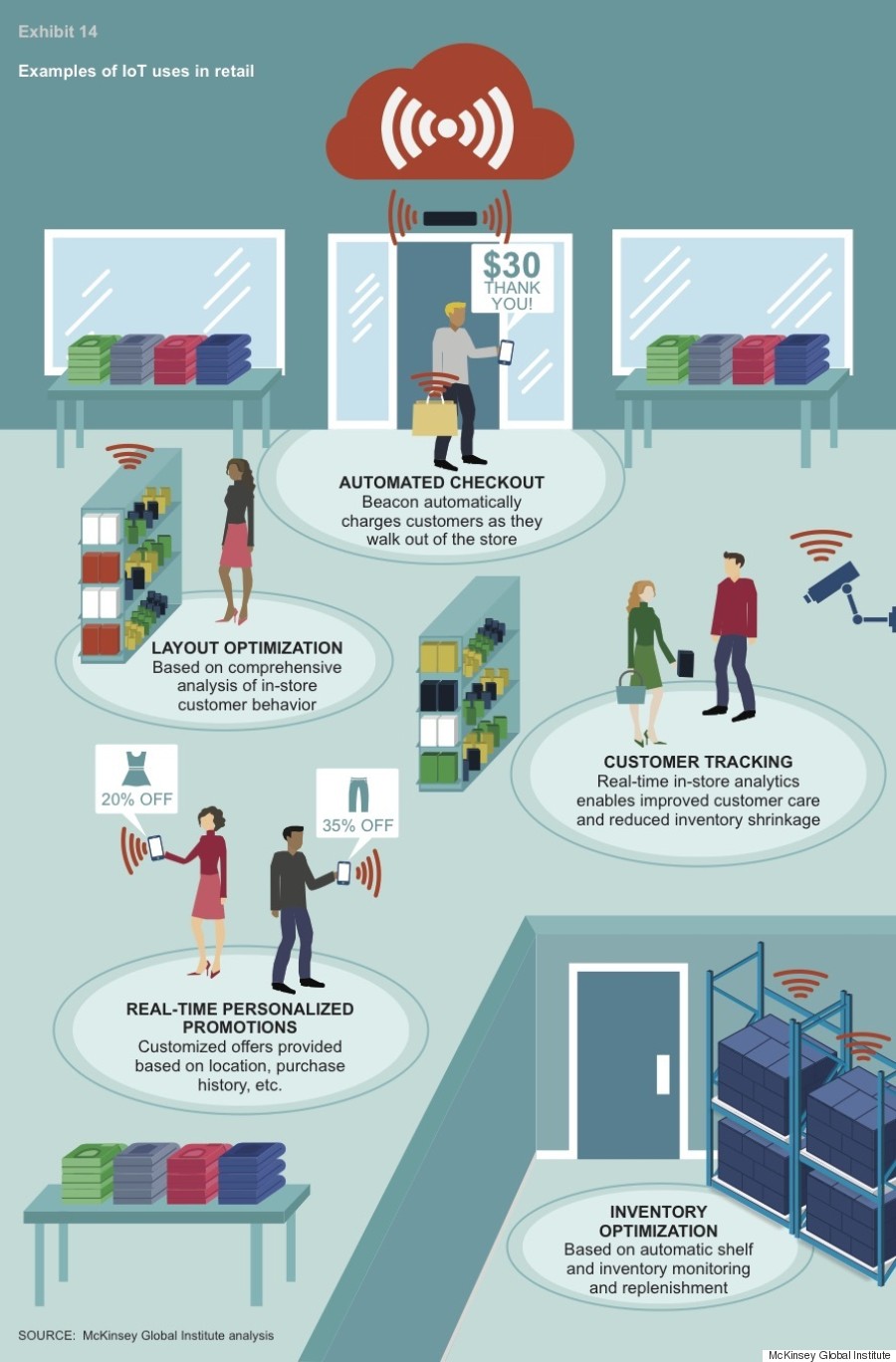