So it’s no surprise that AT&T is charging way more for its highest-speed Internet service in Cupertino, California, where it’s the only provider of superfast gigabit speeds, than in cities where it has a competitor.

AT&T’s pricing power in the small and expensive enclave of Silicon Valley illustrates the state of broadband in the U.S. Because of the huge infrastructure costs of deploying a network, there is very little competition -- nearly 75 percent of households in the U.S. have one or no options for broadband Internet, according to the FCC. And as speeds go up, competition goes down.

AT&T’s GigaPower Internet service, which launched in Cupertino on Monday, will cost consumers $110 per month if they want the top speed of up to 1,000 megabits (one gigabit) per second for downloads. That’s $40 more per month than AT&T charges in other cities where it offers the service, like Austin and Kansas City, Ars Technica’s Jon Brodkin reports.

The difference is that in Austin and Kansas City, AT&T competes with Google Fiber, the search giant’s own superfast Internet network. In those places, both Google Fiber and AT&T offer gigabit service starting at $70 per month.

And in Cupertino, California:

AT&T's price is contingent upon giving the company access to your browsing information and what you search for online, so AT&T can better target ads to you -- you have to pay more if you opt out.

The company declined to comment about the price discrepancies in its GigaPower service. In a statement, it said, “We’re excited to offer the fastest high-speed Internet in Cupertino at a price that is competitive for the market.”

Competition appears to have prompted AT&T to cut prices before. Earlier this month, it dropped the price of its GigaPower service in Raleigh and Durham, North Carolina, after Google said it was planning to launch its network there.

Cupertino, which is home to Apple, is among the most expensive places to live in the U.S., so AT&T can get away with charging people a premium for the service.

"We'd love to see other companies come in and offer competitive speeds to what AT&T now offers," said Rick Kitson, a spokesperson for city of Cupertino. "Everyone needs the speed and the access that's now certainly possible but still isn't universally available." 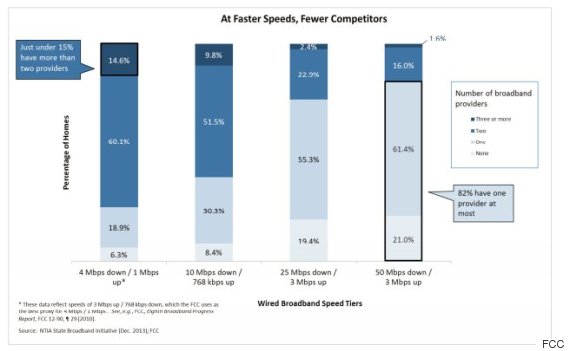 This chart from the FCC shows how few Internet options most people have.

Karl Bode, a technology writer and the editor of the industry site DSLReports, said that inexpensive access to broadband in the U.S. is a much bigger issue than the current deployment of gigabit networks, which he says is “overhyped.” After all, gigabit service is only available to 3 percent of the entire U.S. population.

“So while gigabit is great if you can get it, a far more important conversation to be having is in regards to price -- and how the general lack of competition in the majority of markets has people paying an arm and a leg not just for slow service, but some of the worst customer support in any industry,” Bode wrote in an email. “There's still a pretty notable digital divide and competitive shortfall, and deploying gigabit services to select portions of a small number of cities isn't doing much so far to seriously impact this.”