You may already be familiar with "sidewalk rage." It's what happens to your blood pressure when the person in front of you takes too long in the grocery line -- or the quick, heated anger that creeps up the back of your neck when you find yourself stuck behind a phalanx of slow walkers on the street.

This amplified feeling of impatience is most universally understood as road rage, but most of the time, you aren't in a car when you feel it. And now, apparently, you don't have to even be in public to tap into the experience: We may have a new outlet for our anger in Internet rage.

Think, for example, of the blood-boiling sensation you feel when your Web browser freezes and you stare into the unfeeling eye of the rainbow pinwheel of death.

As technology continues to make our lives more efficient, like filing our taxes with magical ease or revealing everything we need to know about a prospective date within seconds, we expect more data at a faster rate. When our expectations aren't met, we feel that Hulk Smash feeling.

"We now practically insist that Web pages load in a quarter of a second, when we had no problem with two seconds in 2009 and four seconds in 2006. As of 2012, videos that didn’t load in two seconds had little hope of going viral," Chelsea Ward wrote in an exploration of the condition in Nautilus. This decrease in willingness to wait correlates with the decline in attention span: In 2000, the average person's attention span was 12 seconds. In 2013, it dropped to 8 seconds. And here's a fun fact: The average attention span of a goldfish -- the kind you can win at a county fair -- is 9 seconds. 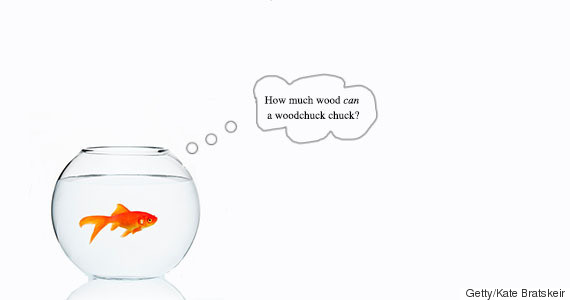 It's a cultural problem
As Karl Taro Greenfeld wrote in The New York Times, we're "faking cultural literacy." We have an instilled sense of "should," that we should know it all, so we attempt to consume what we can of the over-saturated web. "It’s never been so easy to pretend to know so much without actually knowing anything. We pick topical, relevant bits from Facebook, Twitter or emailed news alerts, and then regurgitate them," Greenfeld writes. The worst thing would be to fall behind, to not have witnessed (or heard about) the viral hamster video that everybody was talking about two days ago. This fuels our impatience: We only have 24 hours in a day to make sure our eyes have seen it all, to be able to report what's been reported on. We have no time to waste.

This urge to know bits of everything is altering the way we digest information; the lust for it all means we only have time to skim the surface. And when we do that, we don't have many minutes to get to know anything else on a deeper level. Did you see that headline? How about that gif? That really funny tweet? These are a modern day's way of talking about the weather. The average user leaves a webpage within 15 seconds. (This means most users will not have reached this point of this very article to learn this very interesting fact. Hello if you have!)

The origins of 'slowness rage'
A researcher at the University of Hawaii created a "Pedestrian Aggressiveness Syndrome Scale," which serves as a barometer for the rage felt when being slowed down by factors out of an individual's control. There's certainly a spectrum for this syndrome: At its most severe, "sidewalk rage can signal a psychiatric condition known as 'intermittent explosive disorder,'" Shirley S. Wang writes in The Wall Street Journal. In less extreme cases, those with sidewalk rage might feel impatient and stressed out when walking in a crowded place. They may cut off slower walkers, act hostile toward those not moving at their desired pace or feel no remorse when bumping into a stranger, according to NPR.

We can apply pedestrian rage to really anything we spend time waiting for: A scheduled doctor's appointment that's running late, a cashier taking his time to ring up your items. These days, thought, it's often something on the internet or on our phones that summons the enraged vibes.

Even our walking speed has increased. Psychologist Richard Wiseman found that, on a global scale, we walk 10 percent faster than we did a decade ago.

What happens when we value efficiency above all else
On the internet, at least, you don't have to experience the terrible side effects -- that hostility and rage we talked about -- connected with "pedestrian rage;" you can push any page out of their way and leap from tab to tab without hurting anybody.

Except someone is getting hurt. (Spoiler: It's you.) When you move from spreadsheet to cute puppy photo gallery back to spreadsheet; when you dismiss a video that doesn't load as soon as you click it; when you scroll through your Instagram feed while talking to a friend (because she's not interesting to hold your attention). These forms of multitasking are making you stressed, distracted and unhappy. A 2009 Stanford report found that online multi-taskers struggle more with organization and have a more difficult time concentrating than those who do one thing at a time. Jumping from one incomplete task to another is an inefficient habit. "We underestimate how long it takes to recover from interruptions and get back on-task," Alex Soojung-Kim Pang, author of "The Distraction Addiction," said in a previous interview.

This new age of efficiency has actually warped our sense of time. "The accelerating pace of society resets our internal timers, which then go off more often in response to slow things, putting us in a constant state of rage and impulsiveness," Wald writes.

The fix
If our attention span is shorter than a goldfish's, maybe it's time to pause (if you can bear it) and consider slowing down. What exactly can be done to reimplement a sense of patience, to enjoy the process of standing in line, to remind us that the world can be exciting without a filter?

Guy looking at his phone doesn't see the giant humpback whale right in front of him.

Movements like The National Day Of Unplugging and even tech-free religious traditions like Shabbat are a start: They remind us that not everything has to move fast to be beautiful or interesting, and that each of our brains is capable of doing some incredible things when we let it take its time. Studies show that temporarily going tech-free can reduce stress, ward off depression and anxiety symptoms and even help you focus. You might miss an adorable photo of a squirrel making a snowball, but there will always be something more adorable.

For starters, you can close this window (and if you've made it this far, please reward yourself with a treat), stand up and look out a window. There's got to be something out there that holds your interest for more than a few seconds. Good luck.