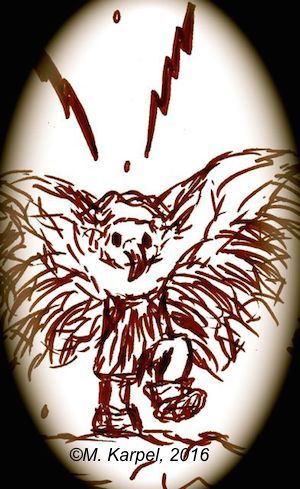 Since I began posting my blogs out in public on The Huffington Post, I have experienced, personally, the phenomenon of being "trolled." Wikipedia defines this fairly recent slang term, Internet troll, as "a person who sows discord on the Internet by starting arguments or upsetting people, by posting inflammatory, extraneous, or off-topic messages in an on-line community ... with the deliberate intent of provoking readers into an emotional response or of otherwise disrupting normal on-topic discussion, often for their own amusement." Perhaps this has happened to you, as it also seems to occur during conversations taking place on Facebook, when a friend of a friend of a friend might insert this type of remark.

Two recent studies conducted online by researchers from the University of Manitoba and the University of British Columbia, as well as an interview with a "troller" , conducted by Jonathan Bishop for the European Parliament, Brussels, found that there are actually common personality traits of people who might be described as "Internet trolls." The researchers all found that people who demonstrate trolling behavior tend to be similar to those people we might consider to be bullies, both adolescents and adults. The research found that so-called trolls tend to use emotional issues to cause people who are involved in discussion to appear foolish or overly emotional. Further, it's been found that if victims of trolling react in an emotional manner, the trolling will intensify just for the amusement of the troll. A common piece of advice, when confronted by this behavior, is: "Do not feed the trolls."

Furthermore, according to the research, trolls are not interested in having a productive discussion. Their interests consist of: deliberately angering people, breaking the normal flow of discussion that might be occurring, deliberately being annoying for the sake of being obnoxious and, most importantly, making themselves the main topic of interest or discussion.

You might notice that there are some striking similarities between these Internet trolls and our own constant self-critical voice coming from our egos. We can even refer to critical inner voice as our "inner troll." Dr. Deepak Chopra, wrote in his book, The Seven Spiritual Laws of Success: A Practical Guide to the Fulfillment of Your Dreams, "The Ego...is not who you really are....It wants control, and it is sustained by power, because it lives in fear."

"Causing fear is a tactic of the ego," wrote Dr. Wayne Dyer. In another writing about the ego, Dyer went on to say, "The ego-idea has been with us ever since we began to think. It sends us false messages about our true nature. It leads us to make assumptions about what will make us happy and we end up frustrated. It pushes us to promote our self-importance while we yearn for a deeper and richer life experience. It causes us to fall into the void of self-absorption again and again, not knowing that we need only shed the false idea of who we are."

When The Human Behavior Coach Beverly Flaxington was interviewed on my Internet radio program , she pointed out, "It's our own minds, so often, that defeat us. We say things to ourselves that tear ourselves down. The self-talk that we use on ourselves absolutely drains us. Lack of confidence and low self-esteem is very typically an outgrowth of too much negative self-talk too often."

In determining where this negative chatter comes from, we might look to what Louise Hay, author of the acclaimed You Can Heal Your Life, says. "We tend to live our lives based on what we believe about ourselves, our world, our capabilities, and our limits. Where do those beliefs come from? From what other people have told us. What if they're wrong?"

We often allow the beliefs of others to become our own, such as the belief that we may no longer be relevant (for more about this, read my previous blog, Women: Discovering Our Power and Voice At Any Age) or that our dreams are no longer important or possible to fulfill (check out my blog, Follow Your Dream No Matter Your Age). The reality is that, just because we believe it, doesn't make it true. A belief is really just a thought that we think over and over again until we believe it. Some beliefs help us in our lives, but others only serve to make us feel bad about ourselves or to give up on our true passion. Those latter beliefs cause us tremendous pain, and we can be more productive and happier in our lives if we are willing to change those beliefs.

The good news is that we each have the power to change our patterns of habitual negative thinking. We can also shift the chemicals in our brains and our bodies -- often as well as or better than medications, such as antidepressants like Prozac or Zoloft -- just by changing our thought habits. In fact, we can improve our health, our relationships, and our entire life by making a simple thought and resulting attitude adjustment.

So, how do we stop the inner troll in its tracks? When we become aware of negative chatter and know that this chatter is not the "truth," even if we aren't able to turn it off completely, it will lose it's power over us and, perhaps, the volume will soften. Writes Eckhart Tolle, in his book, Stillness Speaks, "When you recognize that there is a voice in your head that pretends to be you and never stops speaking, you are awakening out of your unconscious identification with the stream of thinking. When you notice that voice, you realize that who you are is not the voice -- the thinker -- but the one who is aware of it. Knowing yourself as the awareness behind the voice is freedom."

Michael Neill, renowned transformative coach and best-selling author of The Inside-Out Revolution and The Space Within, who joined me for an interview on my radio program, reminds us, "The voice inside your head is not the voice of God -- it just sounds like it thinks it is." With that awareness, we have the power to change our own thoughts -- and, therefore, our own feelings and behaviors.

Many times, in sessions with my clients, I have asked them, "What would you say to your best friend, if you saw him/her saying these harsh words to themself?" According to a new research study by Dr. Ethan Kross at the University of Michigan, published in the Journal of Personality and Social Psychology, this can be taken a step further to create an extremely powerful way of achieving change in our own self-talk. Many studies, especially in the area of mindfulness meditation, have found that having emotional distance from our thoughts helps us to be more aware of what those thoughts are so that we have more power to change those that are not serving us well. Dr. Kross and his associates, demonstrated that referring to ourselves by our own name in our self talk, rather than by first person ("I" or "me"), increases that self-distance and, subsequently our ability to change our own thoughts, resulting in different emotions and behaviors. More specifically, what he found was that, when people do this, they tend to be more supportive toward themselves and give themselves more helpful advice, similar to how they would advise their best friend, rather than critical self-statements. In fact, in another study Kross and his associate Moser found that the brain scan images of people addressing themselves by name during self-talk actually look similar to those of people giving advice to their friends, while those using the personal pronouns of "I" or "me," do not. They concluded that using one's own name elicits more wisdom and brings clarity into our thoughts about dealing with life events. Apparently, using our own name when speaking to ourselves, gives us the emotional distance to be able to shut down that "inner troll."

As Paul Tillich wrote, "Sometimes it happens that we receive the power to say yes to ourselves, that peace enters us whole, that self-hate and self-contempt disappear, and that our self is reunited with itself. Then we can say that grace has come upon us."

So the next time, my inner troll raises its ugly little head, I'm going to look it straight in the eye, and say, "Mara, you know what to do. You've got this!"