In 1993 Peter Steiner summed the entire Internet up in a single cartoon, that is as relevant today as it was 19 years ago: "On the Internet, nobody knows you're a dog."

As an homage to Steiner, I've updated his iconic cartoon for the 21st century: 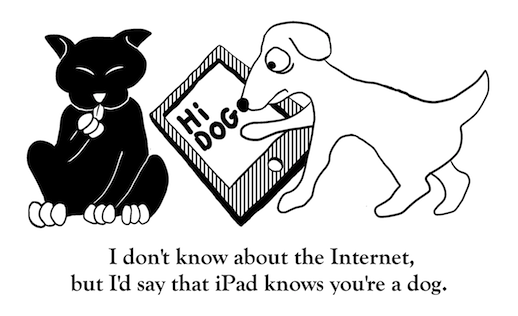 Michael Brutsch, the recently unmasked Reddit Community Moderator known as Violentacrez, has learned this truth the hard way: from a Gawker editor. I was totally prepared to revile Brutsch and his unimaginative, pathetic alter ego as a troll. I can't think of anything more wretched than a middle-aged man exploiting freedom of speech, exploiting young women, and exploiting the easily overheated and youthful Reddit community.

However, the more I think about this mess, the more I realize that Brutsch and his friends do not realize he is troll. Brutsch, and many men like him, are caught up in a misguided world where it's ok to hurt women, as long as you don't know them personally and as long as they do not find out that they are being hurt.

Here is one obvious fact that was lost on Brutsch, even though he is a computer programmer who should have known better: The Internet knows you are dog, a cat, or a creep. I'm guessing that many other men like Brutsch hiding behind so-called anonymous user names and fake online profiles might need to be reminded of this fact.

Even if you turn off your cookies and use Chrome's Incognito mode we, the people you are trolling, can find out who you are IRL (in real life). It's generally not worth the effort to "out" you unless you really get the right victims angry but it can be done. If you are political rights activist in a hostile environment you need to take extra measures. If you are just a man bullying women you should cancel your accounts and get a life.

Reddit is one of my favorite places on the Internet. I respect and depend on its community of posters, voters, and moderators for news and entertainment. I love Reddiquette (Reddit's code of conduct) and I read it over every now and then to keep up on one the most important expression of freedom of speech since the Magna Carta or Declaration of Independence. Reddiquette should be required reading for every school kid on the planet. You should read it for insight in how to craft a free and open community without hurting people. (Like the HuffPost community.)

But I don't hang out in the parts of Reddit where guys like Brutsch hangout. In the back of my mind I realize that the massive audience that Reddit enjoys isn't driven just by enthusiastic supporters of Free Online Courses in Minnesota or Microsoft's refusal to install spyware on phones. It's very unfortunate that sometimes, what a large majority of men seem interested in is the most ugly part of the Internet. That's not my Reddit and yet men like Brutsch have taken over parts of Reddit and are twisting it's community into a boys-only club under the fig-leaf of free speech.

Reddit was not designed to be a hurtful place to women or any gender, ethnicity, culture, or persuasion. The community is in charge, not the Republicans or Democrats, not the principal's office, and not the HR department. The community uses tools like posting, upvoting, downvoting, commenting, and creating subreddits to bootstrap itself. Reddit was designed with the idea that most people, men included, are basically ok, and will do the "right thing" when all the votes are counted.

The online behavior of Brutsch and men like him violates Reddit's own community guidelines as expressed in Reddiquette. It's men like Brutsch who continue to transform Reddit's pages into an island of women-haters hiding behind it's community. If Redditers would use their powerful democratic tools to downvote guys like Brutsch who violate Reddit's principles the Internet would be a safer place for women.

Don't post someone's personal information. A woman's image can be used to identify her and therefore the image is her personal information. Even blurry images or below the neck images contain recognizable elements that can be associated with a particular person. At least get the woman's permission before you post.

Don't editorialize or sensationalize your submission title. It should be clear to anyone that a subreddit entitled "jailbait" is both editorialized and sensationalized. A more factual title would be "technically legal images of scantily clad female minors posted without their or their parents' permission."

Don't ask people to troll others on reddit. Posting images that exploit women is an invitation to men to troll these women. Whether the images are of real women, or photorealistic synthetic images that could be real women, the trolling is always real.

Don't insult others. Posting images of women without their permission or knowledge just so men can ogle them is an insult, or worse, to women. If you don't believe me: Ask a woman what she is going to do about this kind of thing.

Don't troll. Creating subreddits to "enrage redditers" as Brutsch admits to doing (as in "I'm not a racist, I'm just doing it for 'reddit karma'") is a great definition of trolling.