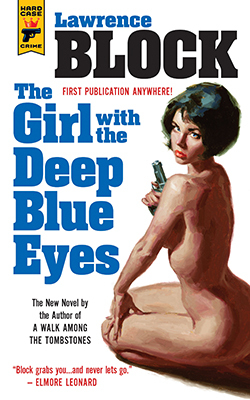 After almost a hundred novels, an uncountable number of short stories, and cherished collections of writing advice and lore, Lawrence Block can lay claim to being the respected grand patriarch of the mystery genre. He has not only inspired several generations of writers, but continues to be a vitalizing force in the literary world through his association with Hard Case Crime, his forays into self-publishing, his embracing and understanding of the ever widening world of e-books, and keeping his work relevant by fearlessly mastering modern publishing's obsession with branding, platform building, and marketing.

His latest book, The Girl With the Deep Blue Eyes, is due to be released by Hard Case Crime on September 22nd, sporting a stunning cover by the late Glen Orbik. Ever affable, Block has willingly stepped into the glare of the interrogation room's bright lights. 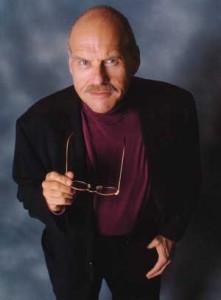 Your longevity in an ever fickle literary marketplace is quite a coup. How have you accomplished this feat?

Sometime in the mid-1960s I found my voice as a writer, and since then I've written what I wanted to write. Now I've always written books in the hope people will read what I write, so I can't claim to have written exclusively for myself. (Then again, if it's just for oneself, why bother to write it down?)

You've put lie to the cliché of teaching old dogs new tricks. How have you stayed on the cutting edge of the changing publishing world?

Well, thank you, but I'm not sure how cutting-edge I am. I've been lucky enough to be open to new things -- some of them, anyway. As far as self-publishing is concerned, my first venture was in 1985, with Write For Your Life; I had developed an interactional seminar for writers and wanted to see it available in book form. And it looked to be a perfect candidate for self-publishing, as I could sell it at the seminar and piggyback my advertising with the seminar promotion. Plus -- a major advantage of self-publishing -- I could have copies in hand in a couple of months rather than wait a year and a half. So I printed 5,000 copies (there was no Print On Demand option then) and we sold them all. So that predisposed me in favor of publishing my own work when circumstances were right for it.

As for e-books, a fellow at HarperCollins was a big e-book fan back in the early 90s, and incorporated a visit to an e-book factory into my book-tour visit to Cleveland. I knew they had a chance to amount to something when I learned they'd tested an e-Reader at a senior center and found a high level of acceptance; seniors appreciated the backlit screen, the ability to make the type any size they wanted, etc. If a new technology won acceptance among the people you'd think would most resist it, I had to figure it had a future.

E-book sales figures kept increasing, but it was hard to tell if they would ever amount to anything. And then Kindle came along, and with it the opportunity to publish one's own backlist titles, and, well, one thing led to another, didn't it?

Having written so many books, both series and standalones, do you still find new plots and characters popping up in your head demanding to be put on the page?

Hardly ever. Ideas do occur, and I think them through and decide the hell with them.

The new book, The Girl With the Deep Blue Eyes, is very much the exception. In May of 2014, my wife and I were in a taxi en route to JFK, where we were to board a flight for two weeks in Belgium. Hard Case's edition of Borderline had just been published after having been mercifully out of print for half a century. And, incredibly, it was getting excellent reviews, a far better reception than I could have hoped for.

"You know," I said to Lynne, "it might be fun to write something like that again. Something straightforward and hard-charging and pulpy. That might be fun."

And fifteen, twenty seconds later, I straightened up in my seat and said, "I've got an idea."

Yeah, just like that. Now ideas come around all the time, and most of them find their way to Idea Heaven, and that's the end of it. But this stayed in my mind and I found myself thinking about it for the next two weeks, and it grew and developed, and when we got back to New York I used Airbnb to book an apartment on Rittenhouse Square in Philadelphia, and I took a train there the second week in July and came home four weeks later with the book written.

Will we be treated to more Lawrence Block from Hard Case Crime or -- as The Burglar Who Counted the Spoons was such a success -- in a new self-publishing venture?

Oh, lord, I dunno. I think my next project will be an updating of Writing the Novel From Plot to Print. It was my first book for fiction writers, and it's still going strong almost forty years after I wrote it, but it needs updating and needs new material and, all in all, needs several weeks of concentrated effort. I'm not sure how I'll want to publish it, but that's not something I need to know until the work is done, and I'm not sure when I'll get to it.

And will there be more novels? Maybe, maybe not. I feel complete as far as all my series characters are concerned. But I may find something I want to write, and may decide I've got the time and energy for it. Time will tell. It generally does.

My thanks to Lawrence Block for his time and thoughtful answers. Now go buy The Girl With the Deep Blue Eyes, I promise you won't be disappointed.

About the Interviewer: Novelist, screenwriter, and television personality, Paul Bishop spent 35 years with the Los Angeles Police Department, where he was twice honored as Detective of the Year. He continues to work privately as an expert in deception and interrogation. His fifteen novels include five in his LAPD Homicide Detective Fey Croaker series. His latest novel, LIE CATCHERS, begins a new series featuring LAPD interrogators Ray Pagan and Calamity Jane Randall.
WEBSITE TWITTER FACEBOOK AMAZON