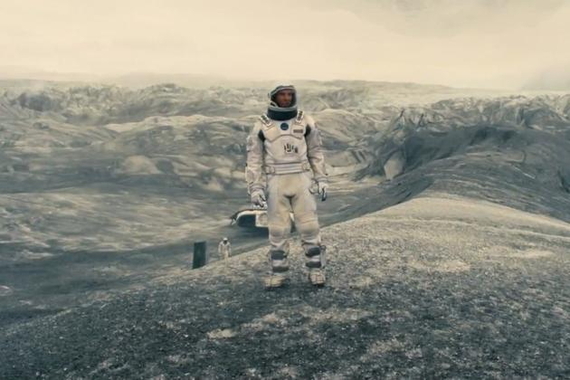 There are moments in time when the coincidence of art and reality interact to allow us a glimpse into the context of history. The release of the Christopher Nolan film Interstellar a few days after two catastrophes in our space endeavor gives us one of those moments.

It began two weeks ago with the spectacular loss on launch of the Orbital Sciences Antares rocket, a NASA-funded yet commercially operated supply flight to the International Space Station that was also jam-packed with student and science experiments and a collection of various innovative new commercial nano-satellites crammed into its nooks and crannies.

It was followed last Friday by the devastating crash of the SpaceShip Two test vehicle, and the loss of life of one of her crew. In this case, not only was a highly important symbol of a new age of space access destroyed, but one of the new heroes of the space age lost his life.

On hour later I climbed off a plane to give that afternoon's keynote at the Students for the Exploration and Development of Space conference. My cellphone suddenly went wild as news of the tragedy came at me from all directions. I had planned to clean up my presentation and myself in my room; instead I found myself being tossed on the air with Shepherd Smith on Fox, and a car being sent to get me to the studio for Al Jazeera.

And in between I had to walk out on that stage and talk to these kids.

I made it one slide into my PowerPoint and had to stop. There was no way I could roll into my normal talk, no way to ignore what had happened. So I turned to the several hundred kids in the audience and said, "There's a guy on life support and another one dead out in California right now. Let's have a talk." From there I proceeded to do my best to explain the "why" of what it is we do in this field, what all of us are about, be it NASA or commercial space. I spoke of the reasons we work our entire lives trying to make something happen that we can't prove is really that important but we know is the most important thing anyone of us can be doing.

I spoke to them of how we, the living, sentient beings who have, for some reason, found ourselves rising from the primordial swamps and through an age when we can destroy ourselves in an instant, can turn those same tools and the same imaginations and minds that created them outwards and upwards to undertake the most magnificent and powerful thing ever done in history: the opening of space to humanity and life.

In reality all I was doing was humbly channeling them and feeding back to them what they all already knew in their hearts but perhaps could not express. I was trying to give voice to the dream they share -- we all in this cause share, this tiny band of human beings who get it in regards to the "why" of our existence, this tiny band that includes the astronauts, cosmonauts, commercial space pilots and all the people in all the agencies and companies engaged in this grand endeavor, and yes, all those buying tickets to go there too.

And then comes Interstellar. One week later I am sitting in its premiere at the Air and Space Museum in Washington, as close to a space temple as there is here in the U.S., as Christopher Nolan apologizes for feeling like a fraud because he is in such awe of the artifacts of that first space age surrounding us, and all he can do as an artist is offer us an imitation, a presentation of what it is we are all about.

Exactly. It is exactly the offered interpretation of this dream given to us in his film that gives us voice and can help those outside the movement understand what it is we are saying, what it is we are doing and why we are doing it. The grandeur and risk, the power and majesty of this amazing endeavor can be transmitted in live footage of a launch, summarized by a newscaster and expressed by those who are engaged in making it so, but sometimes we need the help of artists, of the magicians of other mediums, to help us reach out into the souls of those to whom we are trying to communicate the pure human and basic elementary emotions and simple basics of this thing we do -- and why.

Interstellar does that. First it speaks of a future where people have given up on the dream, and in fact turned against it. It paints a world where mediocrity and the denial of our dreams and history itself is seen as the means of assuring survival -- even when it is clear that by simply sustaining, simply fighting the losing battle of getting by, we condemn ourselves to extinction. And then, slowly, it lifts us up and out of the vitality-sucking gravity well of hopelessness and send us spiraling out into the universe and a future of hope.

And all the while, just as I felt when I stood in front of those kids and felt the wetness of tears in my eyes for my all my brothers and sisters who had lost their lives in the seeking of this great dream, Interstellar is about being human. It is about the simplest of things, of caring, love and being close to those you care about.

That is the inherent and divine irony of the frontier movement. Our cause, while built and riding on the same technologies that may yet kill this world, the harnessing of fire and energy and electrons and blatant challenging of the skies themselves on pillars of flame and fire, is based on the most beautiful of dreams.

We in this movement believe in life. We love this world. We love humanity and believe that far from a ravaging blight, we are indeed the seed carriers of this precious planet. We believe in the values of family and community and caring about one another, because out there your life depends on it as we depend on one another to live -- something we are forgetting in the rising tide of personal and cultural mediocrity that is just beginning to engulf us.

We believe we have a purpose.

After all, as they say in the movie, we may have been born here on Earth, but our future is out there.