As Earth and the other planets orbit the sun, the solar system itself travels through space. Its slow journey is taking it through a wispy expanse of gas called the Local Interstellar Cloud. Now, astronomers have discovered signs of potential turbulence in the cloud, indicated by a shift in direction of helium atoms that flow into the solar system. If the shift is real and continues for hundreds to thousands of years—a dicey extrapolation—it could be a harbinger of more dramatic changes in our solar system, notes study co-author David McComas of the Southwest Research Institute in San Antonio.

The finding, which McComas, Priscilla Frisch of the University of Chicago, and their colleagues report in the 6 September issue of Science, could foreshadow a change in the heliosphere, the vast bubble that shields the solar system from harmful cosmic rays. The heliosphere consists of charged particles blown out by the sun in the so-called solar wind. The size and shape of the heliosphere depends on the balance between the outward push of the solar wind and the inward pressure from gas in the Local Interstellar Cloud—the interstellar wind. 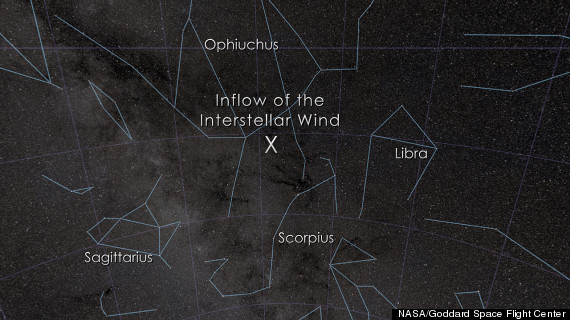 From Earth's perspective, the interstellar wind flows in from a point just above the constellation Scorpius. Results from 11 spacecraft over 40 years show that the exact direction has changed some 4 to 9 degrees since the 1970s.

To detect the wind shift, researchers drew on measurements by 11 spacecraft and satellites that have recorded directly or indirectly the flow of helium atoms into the solar system. Many kinds of atoms infiltrate the heliosphere, but helium is a particularly good tracer for all of them because it is abundant and typically survives in its uncharged, atomic state all the way to Earth’s orbit, Frisch says.

So far, the apparent change in direction is small, about 4° to 9° over the past 40 years. But if it continues to shift direction and flips to the other side of the solar system, the heliosphere could be substantially distorted, notes astronomer William Reach of the Universities Space Research Association at NASA’s Ames Research Center in Moffett Field, California, who is not a member of the study. A smaller heliosphere would let in a greater a number of galactic cosmic rays, which are harmful to life on Earth.

Jeff Linsky of the University of Boulder, Colorado, who is not a member of the team, says that the new result, if confirmed, indicates that the heliosphere is emerging from the Local Interstellar Cloud into another region, with a different wind direction. Frisch disagrees and thinks that it's small-scale turbulence. Either way, the finding will provide "interesting new twists" to modeling of the solar wind's interactions with the cloud, comments Gary Zank of the University of Alabama, Huntsville. In addition, simply having the ability to record such changes in the solar system’s environment “is a really big deal,” McComas says.