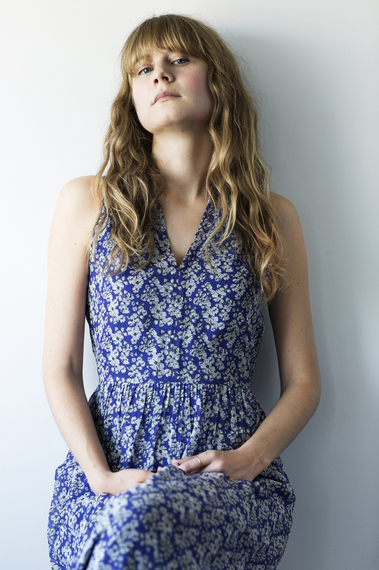 Annie Baker. Photo: © Brigitte Lacombe
Annie Baker arrived in New York in 2008 with Body Awareness, followed by the breakthrough hit Circle Mirror Transformation (2009); The Aliens (2010); a new adaptation of Uncle Vanya (2012); the Pulitzer Prize-winning The Flick (2013); and John (2015). We recently sat with her for a two-part interview.

I've seen quotes from you saying that you develop your plays from settings, rather than plots. Is that just hyperbole?

ANNIE BAKER: I'll give you a more truthful and nuanced answer, because that's a little simplistic. I think I start with the setting and then I also start with a lot of research I want to do. I just do research for years before I write play. With John for instance: I knew I wanted it to take place in a Bed and Breakfast, but there was also all this stuff I wanted to spend years reading books about. So it sort of starts with a setting, and then a lot of philosophical and/or psychoanalytic questions that are sort of circling around in my head at the time. I really end up doing a lot of scholarly research for years before I start to write, and then I try to obscure it all in the actual writing of the play. Hopefully, it holds it up in some way that is not readily apparent.

Do the characters come before the plot?

ANNIE BAKER: They're inextricable for me, so I don't know how I can answer that question. I can even show you my research for my new play, but I don't want you to quote it. I just have a lot of questions, like maybe this happens at one point. Maybe one of the characters is a this? It's just a series of possibilities about story, about plot, about themes, about tone. And then usually these questions, in my notes document, lead me to some book I need to read or person I need to talk to. But it's all sort of happening at once, as opposed to "now I'm going to think about character, now I'm going to think about story."

Most writers fill their script with dialogue and leave the rest to the director or the actors. In your plays, the script spells out what the characters are thinking and what they are doing. How much of what you write, in the script, is non-dialogue?

ANNIE BAKER: It's hard for me to figure out the proportions, but what I'm picturing -- when I'm writing -- is actors on the stage. I'm not just hearing dialogue and transcribing it. That's part of it, but I think a lot of what I'm picturing is movement, and time, and the stage picture. I think that's maybe part of why the setting comes to me first, or often comes to me first: because it's the container for all of that. I do feel like my stage directions are very important. Not because they always have to be followed exactly to the T, but because the movement -- or the sitting or the standing, or the moment when that person pours themselves a drink -- to me feels as important and as intentional as the dialogue. So that is what I'm working with, when I'm writing: I'm picturing those bodies in space, moving around. When it does come to hearing the dialogue and sort of transcribing it, it feels a lot like what I imagine writing a musical score is like. The rests and the pauses are part of that, too, like stage directions. It's sort of like what you put in italics and what you don't. But to me it is all equally important. Which is not to say that in the rehearsal process I am not open to changing some of it.

How does the detailed information in your scripts affect the way your director, Sam Gold, works with the actors?

ANNIE BAKER: Rehearsing my plays is a really different experience, for actors, than most plays. Sam is really good at talking to them about it, because it is different. I think it was the actor Matt Maher, of The Flick, who said something like "it's like playing in a very small sandbox, but in that you have a lot of freedom." Both Sam and I, in the rehearsal process are so specific about where they are standing and exactly what they are doing in that moment -- and about the timing of it, which can seem really, really restrictive. But I've noticed that with certain actors, once we figure that out, there can be an enormous amount of freedom in terms of what they're feeling and what they're communicating in that moment. But it does feel dancerly; more and more, my work feels to me as much like a dance as it is a play. 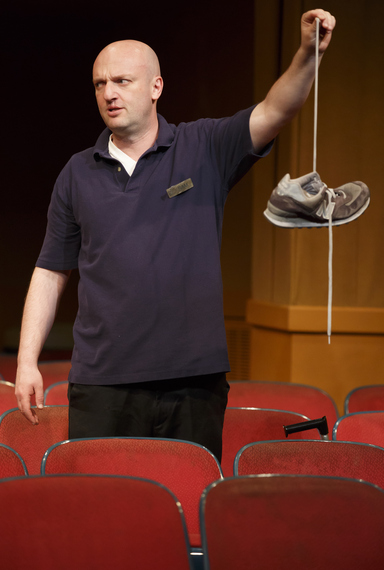 Matt Maher in Annie Baker's The Flick. Photo: Joan Marcus
Have you seen productions of your plays in which directors depart from your written stage directions?

ANNIE BAKER: Well, it's always their own staging. It's always different when the playwright isn't around for the rehearsal process. I have seen other productions, and I have seen other productions I like; I guess those productions are probably more loyal to the stage directions than others. Yeah, I would prefer that people be fairly loyal to them, but I don't think they have to be exact. My favorite moments, in seeing regional productions of my plays that I've had nothing to do with, are when an actor discovers something that's not in the play -- it's not in the text, it's not in the stage direction -- and just has a moment. Because even though my plays are pretty specific about where people are standing and what they're doing, there are also a million things we do while we're sitting here and talking; our bodies, what I'm doing with my hands. I feel like, that's the stuff I love actors to discover. I remember seeing a production of Circle Mirror Transformation in Minnesota. There's this scene where they're all just lying on their backs and counting; there are five scenes that are just that. At one point one of the actors was doing something really specific with his arm during the counting, and I just thought it was extraordinary. I mean, I didn't write that. I really value actors as creative collaborators, and in no way am I interested in dictating their every movement or every thought. I believe in giving them an enormous amount of freedom. I just think the things I'm specific about, I'm really specific about.
[READ PART 1 OF OUR INTERVIEW here]

The Flick is currently playing, through January 10, 2016, at the Barrow Street Theatre in Greenwich Village