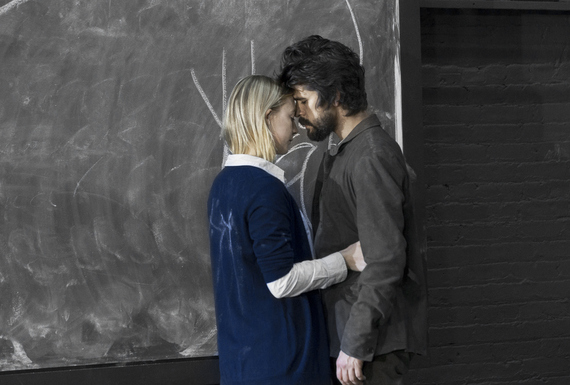 Saoirse Ronan and Ben Whishaw in Arthur Miller's The Crucible.
Photo: Jan Versweyveld
British actor Ben Whishaw is making his Broadway debut as John Proctor in director Ivo van Hove's production of Arthur Miller's The Crucible. Whishaw, a 35-year-old stage, screen and television actor who started his career at 23 as Hamlet for Trevor Nunn at the Old Vic--and recently appeared as Q in the James Bond films "Skyfall" and "Spectre"--sat with us before a recent preview in his cramped dressing room, two-flights up at the Walter Kerr.
.
Did you know The Crucible when you were approached to do it on Broadway?
BEN WHISHAW: Actually, weirdly, I had done the play as a teenager. I had this real love of the play, stemming from a young age. It's happened a few times, now, that plays I've done when I was 15 or 16 have come back to me, later in life. It became like, obviously, there must be some reason why it's come back, so I should do this. Then Ivo van Hove was mentioned and that was very exciting, because I'm a fan of his work.

And you played the same role, John Proctor?
BEN WHISHAW: Yes. This is just the part they gave me, I don't know why. It was a state school that I went to, in the village down the road from the village I grew up in, it was called the Samuel Whitbread Community College. Just a small country school, in Shefford. We had a really amazing drama department.

What did you make of the role at that age? Did you understand the play?
BEN WHISHAW: Yes, I think I did. We had, just last Saturday matinee, a very young audience. I noticed there were a lot of teenagers, young people in the front rows, they all had their elbows on their knees and were leaning in. I think young people get the play, because the thing I remember really responding to was this notion of forcing conformity on people. It's sort of the politics of what happens in a playground, that's what's going on in the play. There are kinds of brutal, basic things that happen in life, at work, in big institutions. I think in school, the same things are going on, you instinctively respond to them. The stuff about the marriage and lots of other things, I probably didn't understand. But it's such a rich play, there are so many things you can grasp or fail to grasp, or discover in it.

Miller's play is set in Salem, Massachusetts in 1692. Ivo remains true to the text, but he places it--scenically, at least--in a very different time and place. Where do you, as John Proctor, think the action is taking place?
BEN WHISHAW: I think he's now, in the world that exists on stage. We've not been specific about it; Ivo is not interested, in the slightest, in naturalistic or even psychological things like that. He's much more interested in stripping away stuff, I suppose, so you get to something more raw and basic. So my feeling is we're in sort of now, in a community.

In terms of the staging, were there surprises that came up in rehearsal?
BEN WHISHAW: Not really, because Ivo gives you a kind of overview talk at the first rehearsal, and he said it is going to be set in a classroom. The whole thing is happening in this classroom, and it was all very considered, and decided before we began. I suppose the thing that is most surprising about the way Ivo works is that he does want to strip things down; he really wants, as much as possible, no acting, no pretense about anything.

Did the question of using accents come up?
We started out having American accents, the British and Irish members of the cast. About the second or third preview, Ivo scrapped it, because he felt it wasn't necessary. If anything, it was a kind of--block. It just wasn't required because we weren't in any specific place, so we could be ourselves. I think because Ivo's Belgian, some of the cast are Irish, some American, Sophie Okonedo and I are British--and since we don't have any trappings of the original period--I think the play could be taking place anywhere. This situation the audience is looking at, could be happening all over the world. It's not exclusively an American problem. 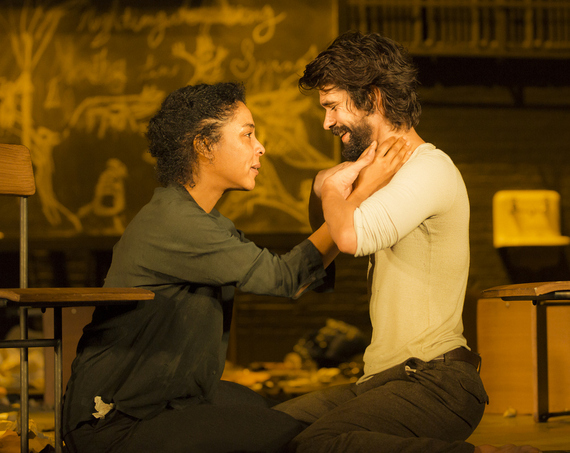 Sophie Okonedo and Ben Whishaw in Arthur Miller's The Crucible.
Photo: Jan Versweyveld
From the audience, your performance looks emotionally and physically wrenching. Is it difficult to play, eight times a week?
BEN WHISHAW: I think the play is so brilliant, and brilliantly structured, that it's kind of impossible not to swept up in it, every time you do it. It requires a lot of concentration, because it's a long play. But I wouldn't say it feels difficult. It's weirdly a pleasure to do it, even twice in one day; it's so really enjoyable. I think Miller is just a wonderful writer for the theatre. He's a wonderful writer for actors, and the play somehow generates its own energy. The audience always seems to be with you, because he sets the whole thing up so brilliantly. It's like a nightmare. View from the Bridge had a similar feeling, I felt it when I was watching Ivo's production. It's like Ivo described it, that car crash you can see coming--but you can't turn your eyes away.

How did you feel when Ivo introduced the various special elements, the effects?
BEN WHISHAW: One of the things that Ivo said very early on, what was important to him was that we convey to the audience that the people in this play really believe in witches, and they really believe that young girls can fly; that you really can be possessed by the devil, or the devil's agents. And so there are little kinds of glimpses of that. Because the play is exploring belief, I suppose, and what belief does to people who are living under a very strict, moral religious value system. So the effects are kind of a cheeky, provocative way of exploring that. There are little flashes into the way these people see the world.

Do you feel like you and the cast are politically engaged by the play?
BEN WHISHAW: Well, what I like about what Ivo's done is that it's not a production that's bashing you over the head with a contemporary resonance. I think what he is doing is something more universal. This could be any community, anywhere. I suppose what Ivo is asking us to pay attention to, is that it always begins as something so small. It begins as a private matter between two or three people, and it explodes into something that is barbaric and evil. But the seeds are tiny. That feels relevant, and frightening; because it's frightening how very complex problems evolve out of small matters, and sweep up the domestic and the private with them.

Arthur Miller wrote The Crucible in 1953, at the height of McCarthyism, when American citizens--including himself--were accused of being Communists and blacklisted. Is that period of history relevant to you, performing the play today?
BEN WHISHAW: I think the play speaks to other things that are happening in the world now, more than it does to the McCarthy era. That was so specific to his time. But because Miller's such a brilliant writer, the play transcends the particular things he had in mind when he was writing it. Certainly, it doesn't resonate with me, or I think to people in my generation. I didn't go through that. It's fascinating to read about the time Miller was living through and what he was suffering, but when I look at the play now, the McCarthy trials are not what I think about. And I'm sure that lots of people won't be thinking about it. I think a great play will always speak to people, because it touches something deeper than what was happening when it was written. Miller was going underneath the surface, he was writing about something more universal. 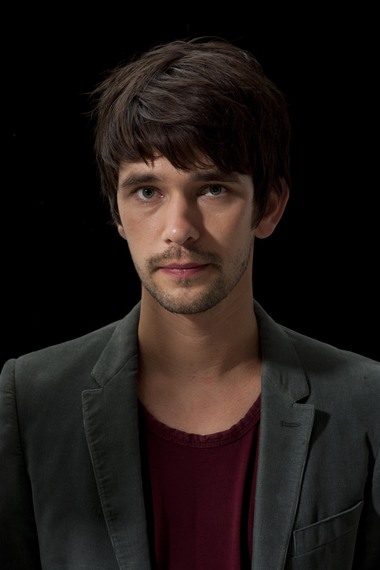 Ben Whishaw, now appearing in Arthur Miller's The Crucible.
Is it different for you, appearing on stage here in New York rather than in London.
BEN WHISHAW: It does somehow feel different. I don't quite know why. I feel like a bit of an outsider. I think it's because I don't really know anyone here. Nobody comes backstage.
.
Arthur Miller's The Crucible is currently in previews for an opening on March 31, 2015, and continues through July 17 at the Walter Kerr Theatre