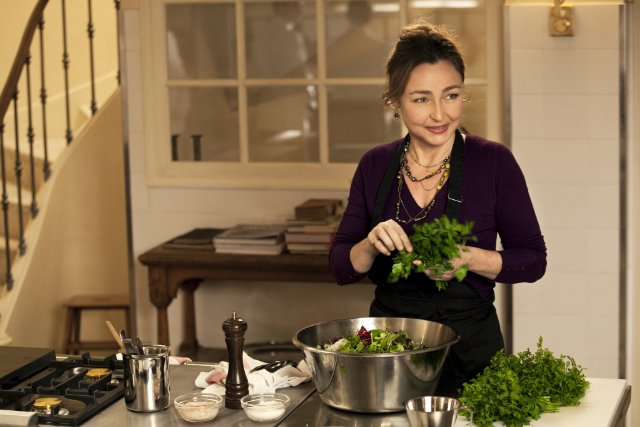 As you watch actress Catherine Frot remove and slice the salmon-stuffed cabbage in the film Haute Cuisine, it seems like an impossibly gorgeous and complicated dish -- steaming and gorgeously layered with the pinkish-orange fish and the warm green of the cabbage leaves.

Beautiful? Perhaps. Difficult? Not really, says Daniele Mazet-Delpeuch, upon whose life the French import, opening today in limited release (9/20/13), is based.

"Stuffed cabbage is very simple -- but instead of stuffing, you use salmon and seasoning," she says, sipping a glass of water in the lobby of New York's Algonquin Hotel. "I gave them a list of recipes for the film and this one is so simple: a layer of salmon, then a layer of cabbage and so on. You tie it up and you poach it -- so simple. You cook it in a broth, because salmon cannot go long being cooked in an oven."

The petite, compact Mazet-Delpeuch, in her early 70s, is in town to talk about Haute Cuisine, a film loosely based on two of her experiences: as personal chef for French president Francois Mitterrand from 1988-90, and her year-long-plus tenure as cook for a research lab on an island off Antarctica. Asked why the character based on her (played by Frot) doesn't have her name, Mazet-Delpeuch chuckles and waves it off.

"It's not a biography -- it's a film, about simple cooking," she says. "It's the kind of woman's cooking that everybody knows about but nobody knows how to do. It's nice dining-room cooking. It can be very simple or it can be more sophisticated in terms of traditional food -- but lighter, with nothing heavy. It's a kind of poem."

Mazet-Delpeuch was living in her native Perigord region of France, where she raised geese (for foie gras) and sheep and cooked the recipes passed down to her by her mother and grandmother. She's been teaching cooking since the mid-1970s, which is how she came to the attention of noted chef Joel Robuchon. Robuchon recommended her to Mitterrand, who complained to the master chef that he needed someone who could cook the kind of food he remembered from his childhood.

"He said, 'I'm fed up with the cuisine de chef'," Mazet-Delpeuch says. "It was just after the start of his second term. When Joel heard that the president wanted a woman to cook for him, he said, 'I know someone.'"

The film depicts her character as a no-nonsense cook with exacting standards but deceptively simple tastes and technique developed by a life spent in the kitchen: "I was in charge of his private meals -- for him and friends and, sometimes heads of state," she says. "The ambiance was different than what I was used to, but it was cooking."