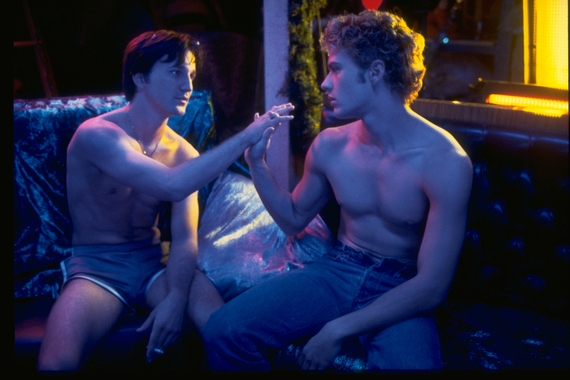 17 years after 54 originally opened in theaters, the filmmaker, Mark Christopher, is finally able to share the movie he wanted to make in the first place. 54: The Director's Cut premiered this year in Berlin and continues to be a hit at the film festival circuit. As Christopher notes, it's not so much a "director's cut" as it is an entirely different movie. Over 40 minutes of 1998 version's footage was replaced with the footage that was initially deleted from the film, altering both its plot and the overall tone. Starting with its ominous opening titles that suggest equal measure of fun and encroaching dread, the new (or rather the original) version is darker and more atmospheric. The central love triangle is more fleshed out and compelling, while Shane's (Phillippe's character) bisexuality is uncensored, including the much talked about kiss between Phillippe and Breckin Meyer. Christopher credits Cabaret as one of his influences and it shows in this release. The touching bond between the three main characters (played by Ryan Phillippe, Breckin Meyer and Salma Hayek) seeking comfort in each other and their found family is nicely juxtaposed against the wildly decadent and exhilarating world of Studio 54. The film may be a deliciously sexy and glittery spectacle but, just like Cabaret, it exists in the looming shadow of the impending catastrophe. Although, 54 doesn't touch on the AIDS epidemic, for anyone familiar with that era, it's hard to watch 54's pansexual abandon and debauchery without thinking of what the 80's were about to unleash on the world - the new plague and the rise of the Religious Right. And so for better or for worse, 54 becomes as much about what it doesn't show as it is about what it does.

WES HURLEY: You've spent so many years working on this film, from the initial research to actually making the film in the studio system to fighting to bring your original vision to the audiences. What is it about this project that drew you in and sustained your passion for so many years?

MARK CHRISTOPHER: What drew me initially was the love of disco music. The good stuff. Not Disco Duck, and not the big car commercials, but the sexy primal dance music that also has violins, horns and fantastic vocals. Disco music represented this sort of freedom.

I was in graduate school at Columbia, and I wanted to do a disco American Graffiti. One of my teachers, Paul Schrader, suggested that I do my disco American Graffiti at Studio 54. So that was the initial draw. Also, I was a waiter in college and I decided to do a project from the point of view of kids who worked there. Perhaps the reason why the film got made is because there were so many competing Studio 54 projects at the time.

Shooting was a wonderful process. Everyone was thrilled with the dailies. When scenes were cut, I wanted to have a VHS copy of our vision, but then this bootleg got out there somehow and it gained a life of its own. Fans have been emailing me ever since, hunting me down, asking when the director's cut is going to come out. It really became a cause for me and my producer, Jonathan King, to get this movie out there.

WH: Can you talk about the inspiration behind the characters you created, especially Shane, Anita and Greg? How much of them are real people that you've encountered in your research?

MC: Shane, Anita and Greg were all composites. The nice thing about having Ian Schrager as your mentor is he can introduce you to a lot of people because he went to Studio 54. He introduced me to some rich and famous people, but also got me hooked into the world of the kids who worked there. I interviewed a ton of bartenders, bus boys and coat check girls. They really are a nice amalgamation.

There's one guy in the film named Patrick 54, and he plays Tarzan in the movie. All the bartenders had their nicknames. In the director's cut, when you see Shane pulling money out of his boot and handing it to this guy he owes money to, that's Patrick 54. He was one of the many bartenders that I had spoken to. 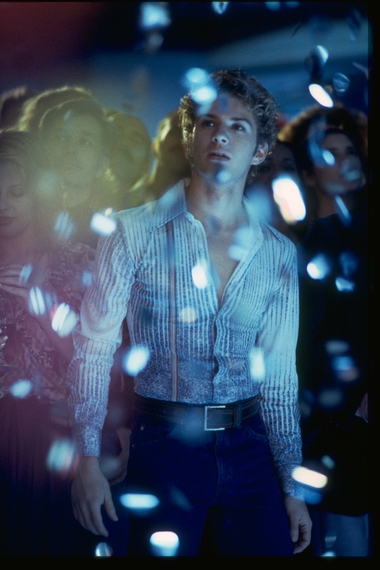 WH: I think one of my favorite things about the film is how perfectly it was cast and the lovely chemistry between everyone: from Ryan Philippe creating one of the sexiest film characters of all time to Mike Myers doing his first dramatic role, to Heather Matarazzo's memorable cameo as Shane's sister. Can you talk about the casting choices for the film?

MC: Casting took a year. I was a first-time filmmaker, and for some reason I really had to dig my heels in with the studio. We had a lot of back and forth, and ultimately that back and forth was really healthy because they wanted names, and I wanted the right person. Getting Ryan took a while because when he first came in, I think I saw him in White Squall, he seemed very much like a 16-year-old kid. But a year later, he looked like a young man, so I cast him right away.

Breckin was the first person I cast. I think he has the heart of the movie. Ryan's character is more of the viscera and soul of the movie, and he's a part of its heart. But the good guy is really Breckin. They're actually best friends in real life, so Breckin recommended Ryan. Breckin kept saying, "You have to talk to my friend Ryan." And I would say, "Well, I've seen Ryan and he is a little too young." But when Ryan showed up, he looked like a perfect fit. I immediately sent Ryan to the gym. We worked his hair to get a look similar to the statue of David. It's kind of a joke, but not really.

Heather auditioned and I was a huge fan of Welcome to the Dollhouse. She gave a perfect audition and I thought they would make a wonderful brother and sister.

WH: How did filmmaker David Kittredge come on board as the editor of The Director's Cut? How close is The Director's Cut to your original vision? Is it exactly what you wanted to release in 1998? Or was some footage irrevocably lost?

MC: My good friend Jim Fall, who's the director of Trick, stored the underground footage under his house in Hollywood Hills. Jim introduced me to David, who was a big fan of the original film, and he was excited to work with us. I was thrilled to have him. He really worked tirelessly on it. Unfortunately, we weren't able to find all of the footage so we had to make some concessions. There's more to some scenes. We really had to pick and choose, and it was really tough to decide what can stay and what has to go. The lab did a brilliant job to help us match footage.

It's very close to my original vision. In some ways it's better because of David. Overall, I'm very happy with this cut.

WH: I'm sure you've befriended some original Studio 54 regulars and employees while researching the film. What was their reaction to the film when they saw it? Have any of them seen The Director's Cut and if so what did they think of it?

MC: They had mixed reviews for the studio version. In terms of this version, they haven't seen it yet, but I'm excited to hear what they think. 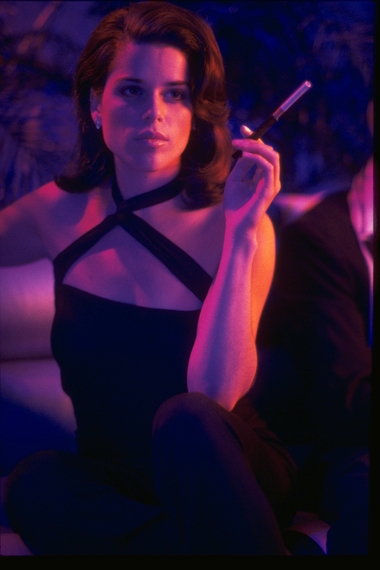 Neve Campbell in 54: The Director's Cut

WH: 54 has a loyal army of fans who've been waiting for a director's cut for years. Can you talk about the audience reception of this cut so far?

MC: It's been thrilling. From Berlin, Mexico, Switzerland, Italy to San Francisco, the screenings were absolutely wild. It's almost a Rocky Horror picture show. Seattle was phenomenal. I'm thrilled, astounded and blessed. The film plays well with a large audience.

WH: Now that you are finally able to share you original vision with world, do you have a profound sense of closure? What's your next project?

MC: I do feel a sense of closure. I'm still doing festival circuits, but it's fair to say that.

As far as next projects, I'm keeping busy. I'm writing a script with Warner Horizon, which is a WB TV arm, and have a TV deal with Miramax. I'm also writing a feature.

54: The Director's Cut is now available on Digital HD (iTunes and Amazon).