When you think of the world's most famous feminist, who do you think of? Among that small group of special women, you can't help but think of Gloria Steinem, the renowned activist and best-selling author, who co-founded Ms. Magazine in 1972, which has become a landmark in both women's rights and American journalism. At seventy-seven she is still just as active, vibrant, and pioneering, co-founding the Women's Media Center in 2006, making numerous media and speaking appearances, and is currently at work on Road to the Heart: America As if Everyone Mattered, a book about her more than thirty years on the road as a feminist organizer. This coming Monday, August 15th, HBO Documentary Films will premiere an intimate biographical portrait of Gloria's amazing life called "In Her Own Words" that features recent and archival interviews and showcases her humor, compassion, wisdom and courage. And in true Gloria fashion, always looking to emphasize she is a symbol of something larger than herself, Gloria and the Women's Media Center are using the film as an opportunity to launch an online campaign encouraging people to voice their own vision and ideas about the future of feminism, intended to spark intergenerational dialogue and help create change.

It is quite evident from Gloria's impressive list of ongoing accomplishments that she is a dedicated and passionate activist. She also happens to be an incredibly humble, warm, charismatic and wonderful person -- as well as a very committed mentor who has nurtured and supported many young women along their path. I am lucky enough to be one of them, having had the pleasure and honor of interviewing Gloria numerous times dating back to 1992; through her support of the 16-year-old web site and non-profit organization I run, Feminist.com; as well as my longtime involvement with the Women's Media Center, which now includes my recent wonderful experience a few weeks ago as a participant in WMC's Progressive Women's Voices media and leadership training program. Even though Gloria is involved with so many important projects and people in her life, she has always graciously taken the time to offer me meaningful support, wisdom, encouragement, and advice, whether in one of her many thoughtful emails to me, or whispering something profound in my ear at an event. She has a very motherly spirit, of caring and love, both for the people she knows personally, as well as those she tries to touch and reach through her work. And as awareness grows about how the diminished status of girls and women is intrinsically interconnected with so many other critical issues facing our world -- and how gender inequality and restrictive gender roles affect everyone, men just as much as women -- we can appreciate Gloria as the visionary and trailblazer she is.

In the following interview, Gloria reflects on the HBO film, the "In Your Own Words" campaign, the current state of women and politics, and her own vision for the future of feminism.

Marianne Schnall: Women's Media Center has launched a social media campaign to go along with "In Her Own Words" asking people to use "their own voices to plot the next 40 years of feminism." What do you see as the future of feminism?

GS: I think of the future in two ways -- survival plus moving forward. Under survival, I would put all the efforts to save the female half of the world from violence directed at us specifically because we are female; what Diana Russell has called femicide.

Under moving forward, I would put all the efforts to humanize the "masculine" and "feminine" gender roles that are the beginning of a false human hierarchy and normalize race, class and other systems of domination to come -- even "Man's" dominion over nature. The deepest change begins with men raising children as much as women do and women being equal actors in the world outside the home. There are many ways of supporting that, from something as simple as paid sick leave and flexible work hours to attributing an economic value to all care-giving, and making that amount tax deductible. Until the masculine role is humanized, women will tend to be much better at solving dangerous conflicts. That's already happened in Ireland and Liberia, and is beginning in North and South Korea.

And of course, allowing women the power to decide when and whether to have children is the only way to solve the 7 billion human load on this planet that threatens to destroy it. Women's equality is also men's survival.

MS: The United States currently stands as 70th among countries in terms of women's representation in positions of political leadership. How do you feel about the current state of women in politics? What do you think is at the root of this imbalance and what can we do to change it?

GS: Unequal access to money and media plus bias, external and internalized, and male-dominant religions and illegality at the polls -- all those are reasons for women's wildly unequal political power. All those are things we have to fight. Remember, at the beginning of this wave in the 1960s, the main way that a woman got into high political office was to marry a man who had it, wait for him to die, and then take over as a widow continuing his work! But the truth is that the voting booth is still the only place that a pauper equals a billionaire, and any woman equals any man. If we organized well from the bottom up -- and didn't fall for the idea that our vote doesn't count; an idea nurtured by those who don't want us to use it -- we could elect feminists, women of all races and some diverse men, too -- who actually represent the female half of the country equally. It's up to us. We need to form Democracy Circles and do it ourselves.

MS: When you were on Christiane Amanpour's show "This Week" she asked you about how you felt about all these conservative women rising stars, you answered that it was not about biology, but about the issues. Can you elaborate on that?

GS: In the suffragist and abolitionist era, there were a lot of white women and some black men and women who argued for the old hierarchy and against universal adult suffrage -- often on religious grounds. It's no surprise that we still have people who look like us and behave like the establishment. I think most women know or sense this because candidates like Sarah Palin and Michele Bachmann get more male votes than female votes, also mostly white votes, while all the women in Congress who are fighting the good fight were elected by the Gender Gap and the Racial Gap. Obviously, the idea is not to get one woman a job, but to make life better for all women -- and for men who are being treated unfairly.

MS: I have heard it said that the next wave of feminism is taking place online. What do you think of the role of the Internet?

GS: The Internet is an almost miraculous way of getting information, of finding and organizing with each other, both minutely and globally -- a million times better than the phone and the mimeograph when we started this wave! Also much better than TV, which is one-way and passive; a plug-in drug. But every medium has its danger. The danger of the Internet is cocooning with the like-minded on line -- of sending an email or twitter and confusing that with action -- while the real corporate and military and government centers of power go right on. In a way, the highest purpose of the Internet is to bring us together for empathy and action. After all, the reflector cells and empathy-producing chemicals in our brains only work when we're physically together with all five senses. You can't raise a baby online.

MS: In working on this documentary, which documents your life, as well as the past and future of the women's movement, what do you feel is its overall message?

GS: I hope the message of the documentary is that we've come a long way in 40 years or so, and we can go at least an equal distance in the next. Also that there is no such thing as perfect, there is unique. And most of all we're communal creatures. We need each other.

"Gloria: In Her Own Words" premieres Monday, August 15th (9-10pm ET/PT) on HBO. To watch the trailer for the film or find out more about ways you can participate in the "In Your Own Words" campaign visit http://womensmediacenter.com/blog/gloria-steinem/. You can also visit Gloria's web site at http://www.gloriasteinem.com 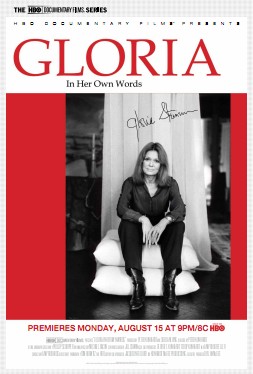