Lionel Shriver is among the most unique voices in contemporary fiction. After a series of little-known novels throughout the 1990s, Shriver burst into the public conscience with the Orange Prize-winning We Need to Talk About Kevin in 2003. The novel was a lightning-rod for its frank and uninhibited portrayal of a high school shooter.

Her latest novel, Big Brother, is a sobering look at obesity and its effect on relationships. I sat down with Shriver at Brookline Booksmith in Massachusetts, where she was slated to give a talk about the book. The author has a reputation for being incredibly candid in interviews, her dry humor often misread. Almost shy in demeanor, her immediate and friendly presentation completely contradicts reports of an indoor-glove-wearing malcontent.

Shriver's latest novel was prompted by the death of her brother Greg, who died in 2009 of obesity-related issues. "That was the instigating event. It was the inspiration," she said of his death. But deciding on the novel took a bit of time, "It would've been a little gross if my brother had just died and I decided: this would make a great novel."

Big Brother is a complex book that deals with a host of family issues, but Shriver wanted to read it through a common lens. "The real story is wrapped in so many other stories, and I wanted to isolate the obesity issue so the book was focused on a theme." But what she did not write was an autobiography, "The whole family is made up, their background is made up, and even the town is fictional." She took pains to make Edison a character distinct from her brother, "My real brother was very complicated. I don't think he would've fit in a book."

Shriver sees obesity as something more than just an over-zealous relationship with food, a point made in the novel. "I am fascinated with what it says about us collectively. I can't help but intuit a larger sense of dissatisfaction. Other hungers that aren't being fed." A citizen of the U.S. but resident of the UK, she's seen the epidemic spread past American borders, "Britain is nearly as fat as the U.S. They used to make fun of Americans and make fat Yankee jokes. They don't do it anymore."

While cautious not to become preachy, Shriver doesn't see the current government intervention as a solution, "I don't see any remedy aside from individual initiative. I'm not big on a government solution. I don't want to pay 'fat taxes.'" She also weighed in on the New York soda debacle: "I think the soda ban was misguided and the court decision was correct: that it's arbitrary." 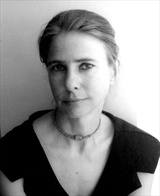 All of Shriver's book show a strong command of language, and tackling obesity in her signature style has raised a few eyebrows. But she takes it in stride, "I had my head taken off by some emailer for using the word 'fat.' This whole linguistic solution to social problems, I don't buy. It doesn't resolve the prejudice." She also doesn't feel the renaming works to the benefit of those affected, "We can call it something else, but it doesn't change anything. It doesn't change the fact that if you have enough of that stuff, you're going to incline toward type II diabetes."

Shriver often banters with reporters, catching them off-guard with her candidness. After I mentioned that the book wasn't "fat-shaming" at all, she jumped in: "I hate that expression. It's apparently become quite fashionable." She was quick to let me off the hook personally, but added, "That same emailer used that expression." I jokingly cowered. She let out a hearty laugh, "You're toast!"

We chatted about Shriver's odd relationship to the press. Reporters regularly attach unflattering terms to her persona, "There are a couple words that get attached to me. One is 'scary,' and the other is 'stern.' I take that as an insult. 'Stern' sounds humorless, judgmental, aloof, chiding." When asked if the labeling is sexist, Shriver responded in a measured manner, "In both instances, I figure it's somehow a euphemism for something else. I have a feeling it's a euphemism for a quality that wouldn't require a euphemism in a man. I can't quite say what it is. Maybe there's something direct and unapologetic about my presentation of myself that takes people aback or rubs them the wrong way a little."

Part of her reputation likely comes from the incredibly dark nature of We Need to Talk About Kevin, a book she openly admits she's sick of talking about. "You can't repeat the same thing over and over again without it beginning to change. And what it becomes is almost a parody of itself. And I don't like that sensation of self-hatred." At this point, she regularly refuses to talk to the press about gun violence, a conscious decision to avoid exploiting tragedy, "There was a point at which I decided I couldn't be 'Miss School Shooting' any longer."

Her fiction is often described as dark. Big Brother continues in this vein despite the subject matter being less overtly violent. And there's a reason these characters' relationships always seem to be in turmoil, "Look, I don't write about happy-clappy relationships. Relationships are only interesting when something's going wrong in them. ... Those times when nothing terrible is happening are surprisingly brief and rare and precious." But these characters aren't innately doomed, "I don't intend the marriage in Big Brother to be a bad one, but they're having their problems."

Shriver doesn't accept the notion that she is a personally macabre individual. "It's humanity that's dark, not me!" she jokingly exclaimed. "It's a natural consequence of reading the newspaper." Unlike many of her characters, she enjoys a fulfilling marriage to jazz drummer Jeff Williams. Jazz music is a strong presence in Big Brother. "I listen to a lot of jazz," she says, before pausing and adding wryly, "By necessity."

Many wonder if the darkness in her work reflects a personal unrest, despite her successes. "I am a relentlessly pissed off person, but I think being pissed off makes me happy," she explains with a jovial laugh. "So ultimately, yes, I am!"