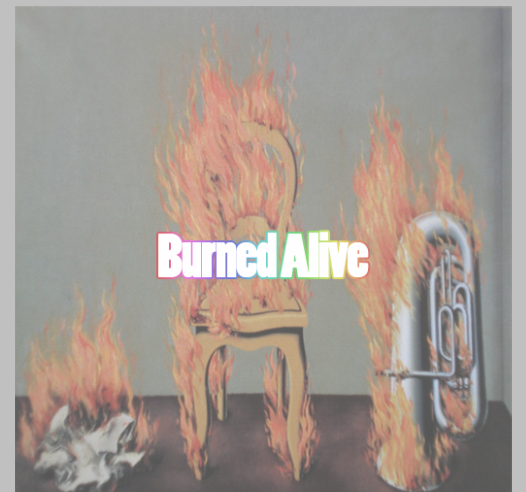 Songwriter, producer and singer, Tehon is close to releasing his new EP, however in the meanwhile, his single "Burning Alive", is one of the most dramatic, explosive and emotional tracks, spawn from what seems like the depths of pain.

Tehon is the real deal. His style is alternative hip hop, his music goes beyond the boundaries of genre. His story, originally moving to LA, losing his apartment, only to return to North Carolina, only to lose his home there to a fire. Yet with all of his setbacks, he has stayed focused on his music.

Sometimes you do an interview, and the answers are so moving, you just fall in love with the artist. This is that kind of interview...

What is your inspiration for "Burning Alive"?

I made this song through a bit of heartbreak. Cliche right? But at this point the pain felt a bit different. The pain was intense and increased to the point that it disappeared. It was a "whatever" kind of acceptance that could only come through the pain. In a lot of the song I'm sharing multiple perspectives at once. The grand theme of it is about how much hurt we can cause when we we're close to one another. It's more emotive then articulate as I just tapped in and started expressing and didn't really slow down to articulate.

Kanye is my number one influence in life. He has opened my mind in ways that will never be closed again as he has done for most of us who listen. A lot of my other major influences aren't musical. I honestly want to give deserved credit to so many people here who have deeply effected me. But simply put I'm influenced by pretty much everything that comes out. Directly or indirectly. I feel at one with us all. Breathe in, Breathe out.

I feel like you had a rough road on the way to getting your talent out there, how did you face your challenges?

If this was a while ago, maybe years. I would tell you that the challenges were signs, and test, and things of that nature. Maybe that's what they are, maybe not...who's to say. But today I pretty much view challenges as just apart of life. Nothing more, nothing less. Every challenge I'm faced with I try to remember to accept them, face them head on and then move on in the best possible fashion. Which can be a challenge in itself. Some say what doesn't kill you makes you stronger, and that is empowering. But the hard truth is, an overwhelming challenge has the capability of making you weaker. I just face mine like the metaphor of water. Unbreakable, unstoppable, just keeps going. Fluid.

Is there a specific message that you are attempting to convey to your fans through your music?

As much as It would be cool to display a specific message, I realize it's not something I have much control over. Music is an experience that people can take what they want out of. It's not even a two way street, it's a multiple lane highway, in all directions. There's so many factors that can play into it, it's a little less then predictable. Like I've watched a video, movie, or book, where the author or director, so clearly and obviously to me was conveying one message, and I'll have a friend or someone, who got something totally different out of it. Sometime's even the opposite of what was intended!
And I'm like dude...How the fuck did you get that! But who am I to say right? I could be the crazy one. But then they'll listen to me from then on once I show them an interview of the creator them self discussing his or her message. So that's what I'll do. I'll share what I mean when called for. After the fact. And in respect to everyone else's experience.
ALL I ask is please, take something positive out of it. Whether the picture I'm painting is a dark or light one, the message received from it should always be for the greater good. If it's a positive song, you can receive and revel in the positivity. If it's a more negative song as with a positive song, you can gain insight, seek to understand, and you can empathize as well. You can also choose to dwell in the negativity and have catharsis with me if you already empathize. But what I don't recommend is re creating anything negative. From my experience It will not be good for you or anyone around you.
You will cause extra and unnecessary problems for yourself. We want to dis-spell the badness not make more of it. Some of this also explains why I also believe there's not always necessary a clear distinction between negative and positive either. Life is gray.

When do you think you'd EP will be ready for release, and what will you call it?

In the near future. It's called, Dystopia's Whimsical Beauty

Do you plan a tour to support the EP once it is released?

I'm sure I will. Performing is a great, big pleasure for me.

How important is music to you?

Music is literally my everything. I've been making music since 12 years old and it's a major artery in the make up of my character. It's also been the biggest tool throughout my life in the appreciation of me and even the understanding of me. Before having a voice through music I felt as if I had less of one. And music is what built me up as a person to be able to express myself even outside of music.

Is there another project in the back of your mind after the release of the EP?

This is an exciting question! Yea I do! I'm constructing a newer sound that's sort of a progression on my current one.
As a producer I just want to continue to tap further into my imagination and bring my visions to life. Thank you for these questions. Really enjoyed this interview. Have a lot more in store to share.