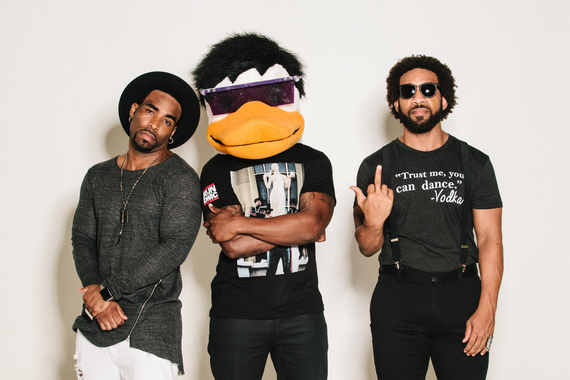 "Everyone sees the Duck traveling smoothly on top of the water, but no one sees how hard he's kicking under it to stay afloat." This line opens the bio of WatchTheDuck, hailing from Alabama, and who just released their star studded Trojan Horse EP, with guest appearances by music heavyweights Pharrell, T.I., and Afrojack. They rose to success when MTV handpicked their single "Poppin Off" from YouTube, and haven't looked back. I caught up with members Jesse Rankins and Eddie Smith III, while they drove to a meeting in an Uber, somewhere in New York City.

Tell me about the EP party.
Jesse: The EP is like a WatchTheDuck festival and this was our first party. We played, Pharrell's dj Mike Larson played, Steve Aoki played. We wanted to make sure there were a lot of genres, but we all played a cohesive sound.

What do want to share with this project?
Eddie: Our whole goal is deeper than music, just expanding culture, to a place where people show more people like where we are from, they don't have to choose, they can be multiple things at one time.

Jessie: We want to continue the legacy of people who are the reason we do what we're doing. Music is freedom and we want to give that back.

What was Montgomery (Alabama) and the music scene there like?
Eddie: Montgomery is exactly what you think it would be. It's the Bible Belt. We have cows, and farms, but also lots of buildings. If there is music like what we play, it's real underground. And when we started playing there wasn't too much diversity, which is why we left to travel. We're both Alabama boys, but you have to go somewhere to find your tribe.

Jessie: Alabama is crunk. We grew up dancing, we partied, we were participators. You left the club sweaty. VIP wasn't a big deal in Montgomery. They have some of that now, but the VIP was the dance floor and who was in the center. Booty shake, being played at 120pm. We only played Southern music, what was coming out of Houston, what was coming out of Atlanta, out of Tennessee. That was the scene.

How did you meet?
Eddie: Jessie and I went to the same junior high school. We've seen each other in our awkward phase. Me and Jessie were in a symphonic band in the percussion section in Junior High. But to fast forward it really came together when we met again in college at Alabama A&M. We would literally be producing together, a collective of minds. It became more serious. We were older, we knew we were making something that was really cool.

Where are you based now?
Jessie: Mostly between Atlanta and L.A. We're in New York now, but we don't fuck with the cold like that.

Why do you think it took so long for this EP?
Eddie: We lived on the road after the first EP, and we learned a lot about our sound and just tweaked. We were thinking about the stage when we made it. Also, we are in a better place team wise.

Jessie: When we did "Poppin Off" in 2012 it was like when Steve Jobs made the Macintosh in 1984. It was a lot of information ahead of the game, but it put a flag down, because the world wasn't quite ready. All the people involved in the EP are people we were working with and who we met during or since that time. We met Pharrell and T.I. through each other, it was just a journey. It's our first time dropping a lot.

Eddie: And we're already cooking up an EP and an album.

Do you have any advice for other DJs and producers wanting to get where you are?
Eddie: Go with your gut feeling. WatchTheDuck came about in our career when we were tired of chasing other people's projects. We were producers and songwriters and writing for other people, and when we gave it to other artists and they recorded, it didn't sound the same.

Jessie: We are in a space now where artistry is so many different things. Growing up we thought you were just a singer, or a music producer. Now you have to be many things.

Also, don't be so quick to give your goods away. See what you can do.

The Trojan Horse EP is out now and available on all formats.
To listen to WatchTheDuck and for tour dates visit: www.watchtheduck.com