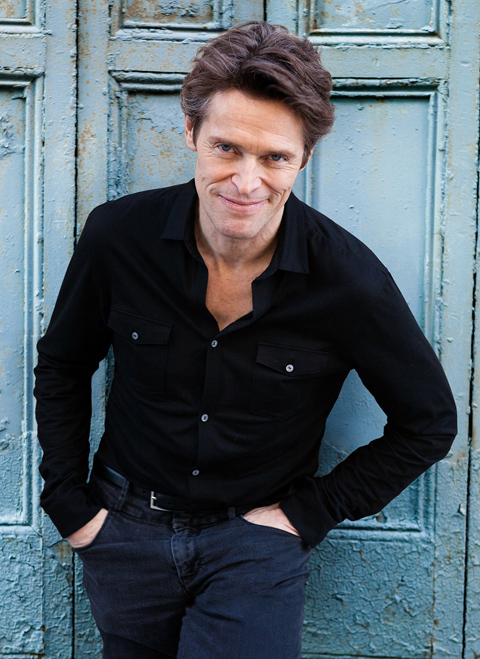 It is a fascinating experience to see such an iconic face up close. In life, huge blue eyes twinkle with kindness and curiosity, resting on top of cheekbones higher than any mathematical equation could seemingly allow. He can look serious, almost dangerous, but then suddenly his generous mouth will issue forth a grin so powerful that it takes up most of his face and the sheer joy of it can almost knock you backwards two-feet! This is the face that can and has played every kind of role. From Martin Scorsese's Jesus Christ to Tars Tarkas, Disney's green 9-foot Martian with four arms. His face can look noble (Born on the Fourth of July, Passion of the Christ,) or villainous (Platoon, Batman) or like a beautiful and capable but emotionally cautious leading man -- where we find him in his new film, The Hunter. In The Hunter, the camera approaches his face at such a delicate pace, almost like a lover would, and leans into eyes so big and beautiful that it's easy to stop breathing for a moment.

It was one of the most wonderful and unique starts to an interview ever: Within a minute, Willem was speaking in the incomprehensible babble of the Looney Tunes Tasmanian Devil. And then in Italian. Two of the world's finest languages! And they say "Tasmanian Devil" is very hard to pick up.

Willem Dafoe has been in over 60 films: Platoon, Off Limits, Streets of Fire, To Live and Die in L.A., Born on the Fourth of July, The English Patient, The Last Temptation of Christ, Mississippi Burning, The Boondock Saints, Spider-Man, and The Aviator, and voice roles in Fantastic Mr. Fox and Finding Nemo. But Dafoe doesn't fall into the usual categories of famous actors we've seen. Take a recent appearance on the Stephen Colbert show, for example. Colbert asked him, "Are you a movie star, or are you an actor?" Dafoe looked befuddled for a moment and then shyly asked, "Are there any other choices?"

And that's Dafoe right there.

In a kind of "Trifecta of Earthly Destruction", Dafoe is starring in three films largely centering around the end of the world, coming out in the span of a month: The Hunter, John Carter, and 4:44.

Australian director Daniel Nettheim knew he needed a big name like Dafoe to get his film, The Hunter, made. But more importantly, the character of Martin David is so very many things and Willem Dafoe could be all of them: A leading man, old enough for this to be his last shot at redemption, young enough to explore the wilds, possessing a wry intelligence, able to portray isolation and tragedy, but also a deep connection with the family he discovers. A man who is in a in a state of extreme physical fitness -- And why is he so fit?? "YO-GA," says Dafoe. "My guru says that (speaking in a tiny ancient Indian voice) 'the end of the world is coming'".

Apparently, the only way to face the apocalypse is in Downward Facing Dog.

Martin David (Dafoe), is sent to Tasmania to discover the legendary Tasmanian Tiger by a company who wants the tiger's genetic material, at any cost. At first, the Tasmanian locals are so hostile that it seems that the hardest part of finding the most elusive creature on the planet may be just renting a room.

But Martin meets through local Jack Mindy (Sam Neill) two children in a dilapidated house, seemingly alone, until Martin stumbles on a larger truth: Their father has gone missing in the vast wilderness and their beautiful mother (Frances O'Connor) in in bed, swimming in a sea of pills and despair. And the search for the tiger simultaneously becomes a search for love and connection. 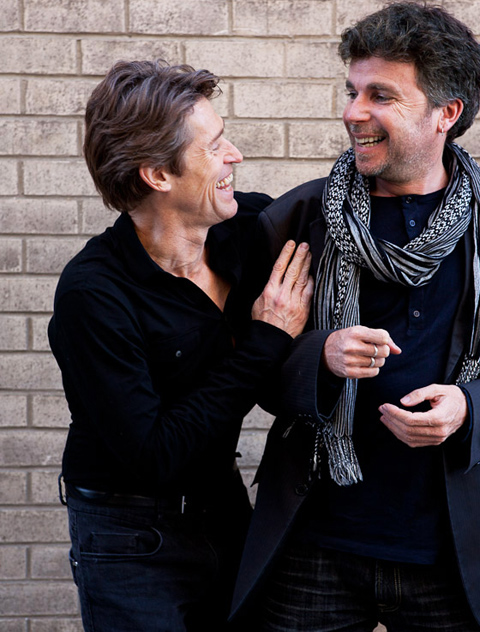 The Hunter, originally a book by Julia Leigh, explores Martin's journey through Tasmania. Produced by the Academy Award nominated producers of Animal Kingdom (PorchLight Films), we see Tasmania in a way it has never been captured on film before. Dafoe says, "Even many of the locals who live nearby have never been there!" And it does not disappoint. The Hunter's Tasmania is absolutely wild and glorious. The original musical score is exquisite and deeply serves the landscape and the story.

Not captured on film since 1936, the tiger is a much of a faith and a religion as Scotland's Loch Ness Monster. The wilderness is so extraordinary and dangerous, and the locals are so angry and desperate to get this foreigner out, it's hard to know if our hero will get the tiger, or if the locals will get our hero. Suddenly the hunter becomes the hunted.

If the Tasmanian Tiger has not been officially seen since the last one died in captivity, an imprisonment the film depicts hauntingly, does the tiger still exist? Daniel says, "I started the project as a cynic but I've talked to people in Tasmania from all walks of life who have very legitimate stories of having seen one themselves. That passion and that conviction, it's very seductive. I am now much more open-minded than I was." Willem says, "Science tells us no, but there are sightings all the time, even during the filming! There is a part of me that hopes it's still out there."

One thing that is clear is that the tiger, unlike Freud's cigar, comes to mean much more than the tiger itself. Willem says,"One thing that was very interesting to me was how much I identified with the tiger. In order to find it you have to imagine who it is and what it wants and so Martin gets very much in the tiger's head. At the end there is a sense of looking in the mirror."

What does the tiger represent for Daniel? "For me, the Tasmanian tiger represents hope but it also strongly represents the mistakes of our past; our failures as a colonizing nation. And it asks the question, 'Can we redeem ourselves as a race?' In the course of the film, the tiger comes to represent love, the elusive creature that everyone is desperately hoping to find."

Dafoe's Martin David feels almost like an animal himself. He is so attuned to all the sounds of the very wild landscape that watching the film, we breathe, live and fear, through him. It's like that old stand-up joke, "If your cat suddenly runs out of the room, you'd better get the @#! out of there too!"

With over sixty films, and a range that tells us that he's "always looking for the next adventure," how does Willem Dafoe feel about the nature of film currently? "It's a challenging time now because film is in a kind of crisis. You hope that when things get bad enough that something's got to give to make room for something new, but as far as performing, good opportunities are always hard to find. I do have my moments of despair, but I'm still finding interesting things to do, so I'm happy for that -- that's the beauty of film. The target keeps on moving."

The Hunter opens on April 6. For the website and trailer, go to: http://www.thehuntermovie.com/#.