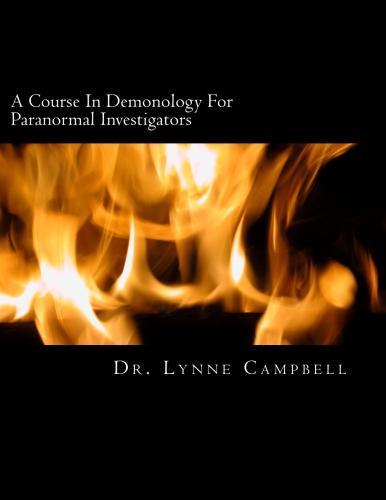 My favorite stage in writing works of dark fiction is the research and my latest projects have thrown me into the worlds of the invisible and vile. Preliminary investigations of these debated and controversial phenomena led me to the Twitter profile of Dr. Lynne Campbell, a Toronto-based demonologist and author, who agreed to answer questions as part of my book research and then agreed to this second interview... just as summer dims to a whisper.

As the darker seasons approach...

Q: How would you explain the reason for a demon's existence to a non-believer?

A: I would share with them that there must be a balance in all things. This is part of nature, which we see all around us. There are opposites for everything. Some examples would include: land and water, light and dark/the absence of light, hot and cold/the absence of warmth. In keeping with this we also see human love and acts of kindness, just as we see hatred and acts of cruelty. This does not change when speaking of spiritual matters.

It only makes sense that if there is positive spiritual energy in the universe, there must also exist an opposing force of the negative. I cannot, and certainly wouldn't want to, force anyone to believe in the demonic, however. I would explain the "why" of its existence as part of this universal balance. My book A Course in Demonology for Paranormal Investigators delves into what the demonic are and what they want. It may also be helpful to others who are interested or curious about the subject matter.

Q: So what would you tell those who don't believe in spiritual possibilities at all?

A: I would say what I've been saying for years: What you believe or do not believe is strictly up to you. What I write is for those who do believe, not to force my beliefs on others. I wouldn't want anyone forcing their beliefs on me.

Q: What can be done to get rid of demons, say from an area they prefer to haunt?

A: Exorcism of the home that is infested and/or of the person(s) who has been invaded is the only way to banish the demonic once they've found a "point of entry". Exorcism is a multi-faith practice. Every culture around the globe has exorcism rituals. I again refer to my book A Course in Demonology for Paranormal Investigators.

Q: You believe that some medical diagnoses are incorrect and are in fact spiritual possessions. Can you elaborate on this and how can we tell one from the other?

A: While certain neurological, emotional and other physical illnesses and conditions have symptoms that overlap with symptoms of spiritual possession--by presenting these in detail--I contrast their symptoms with those unique to possession. Dissociative Identity Disorder (DID), formerly known as Multiple Personality Disorder, is often confused with spiritual possession, for example. There are several traits of the possessed that are not a part of this illness, and there is also one major distinguishing characteristic of the medical criteria for DID that's the opposite for spiritual possession (literally).

My hope is to help paranormal investigators (PIs) and medical professionals work better together, in the best interest of our clients. Demonology II: A Course in Differentiating Medical Illness from Spiritual Possession--my second course for PIs--is a comparison of the symptoms that may closely resemble possession, and how to tell the difference by examining those symptoms unique to possession solely. This contrast is vital to prevent people who are, in rare cases, truly possessed, from ending up in prison or psychiatric facilities without the spiritual help required to be released from torment and saved from a horrible death.

Q: You wrote a book, A Course in Demonology for Paranormal Investigators. Can you tell us why you wanted to write it and how it's been received by the PI community?

A: I felt compelled to share my knowledge and the information passed down to me from my mentors with my peers, as I saw others doing dangerous things and exhibiting a serious lack of knowledge regarding the demonic. I mean this most respectfully; I was worried someone was going to be seriously harmed or worse. I've been fortunate in my experiences as a PI and demonologist--and while I would never claim to know it all, no one does--I have much to share to assist those like myself to work wiser and safer.

The book, of all of my current titles, both non-fiction and fiction, is the one people buy the most. I've received a lot of kind support from other PIs and their teams who understand that I'm not trying to say I'm better or putting anyone down. Even PIs who are very well versed in demonology have bought my book, because like me, they know the benefits of knowledge exchange in our field. We can always learn from one another.

Q: So what kinds of experiences have you had that made you concerned for others?

A: I've been pushed down a flight of stairs more than once and have been attacked by what felt like a large male beating the crap out of me. I've had my arms and legs lose feeling to the point where I was unable to walk without help. The worst, however, is when non-human spirits tried to enter my body. Psychopomps, like mediums, are always at more risk when involved in paranormal investigation. It's the most invasive, repulsive feeling you can imagine. It's a spiritual battle where you must use all your metaphysical energy to push outwards to stop from being invaded. You must have a very strong will and fight it off with it.

I always know when this type of attack is coming because my solar plexus starts to tingle like crazy and I get very dizzy. This is why it is imperative to keep the aura and auric shell strong. There are ways to strengthen one's energy field and I provide this information in my first course book. Other forms of attack I've experienced include scratches, bruises and nightmares that go beyond anything you've seen in horror films. Self-protection is a huge part of being able to do this work. You may still get injured, but you'll survive and nothing will "get inside".

Q: What is your educational background and what made you decide to become a demonologist?

A: I'm a forensic psychologist who specializes in violent crime, particularly serial crime. I have a PhD in Forensic Psychology, a Master's in Educational Psychology, and a Bachelor's in Personality and Religion. I've worked in the fields of mental health, addiction and adult education for close to 15 years now. I was born a Psychopomp (similar to a "medium" but one who is a guide for lost souls) and my experiences with the paranormal began in early childhood. This gift allows unsettled, angry, confused or destructive human spirits to communicate with me and vice versa. It also allows non-human spirits to do the same. I knew from an early age that there were energies that wanted to harm us, or worse, and I felt called to help others.

Once I became involved in forensics I saw more and more of these energies at work and my personal experiences with them increased and intensified. I knew I had been called not only to help people, but to battle the darkness: in order to do that as effectively as possible, I had to know as much as could be known about the demonic. There are no degrees and very few books and courses in demonology available. As I mentioned earlier, I was fortunate to have so many wonderful mentors. For those who may not have this, I wrote my demonology course. Once you have been called to be a spiritual warrior, you can either embrace it, or try to deny it.

I chose to embrace it, just as my peers have.