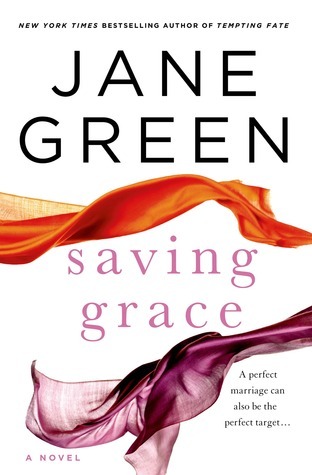 Grace and Ted Chapman are widely regarded as the perfect literary power couple. Ted is a successful novelist and Grace, his wife of twenty years, is beautiful, stylish, carefree, and a wonderful homemaker. But what no one sees, what is churning under the surface, are Ted's rages. When Ted's longtime assistant leaves, the house of cards he has built begins to crumble. Grace, with dark secrets in her past, is most vulnerable. She finds herself in need of help but with no one to turn to...until the perfect new assistant shows up out of the blue. To the rescue comes Beth, a competent young woman who can handle Ted and has the calm efficiency to weather the storms that threaten to engulf the Chapman household. However, it's soon clear to Grace that Beth might be too good to be true. This new interloper might be the biggest threat of all, one that could cost Grace her marriage, her reputation, and even her sanity. With everything at stake and no one to confide in, Grace must find a way to save herself before it is too late.

Powerful and riveting, Jane Green's Saving Grace will have you on the edge of your seat as you follow Grace on her harrowing journey to rock bottom and back. In our interview, Jane Green explores the inspiration behind Grace, her own love of cooking, and the most important advice she would give to an aspiring writer.

Tell us the story behind the story. How did SAVING GRACE come to be?

Initially from a bookkeeper we had employed who turned out to be dishonest, with a history of stealing we didn't discover until it was too late. I started to think about the assumptions we make that everyone we meet operates under the same moral code, and how betrayed we feel when that isn't the case. This led to creating Beth, who seems like the perfect assistant although Grace has a feeling from the start that she has another agenda, even though she appears so great, everyone thinks Grace is crazy. Including, after a while, Grace herself.

What was it about Grace as a character that intrigued you?

I knew nothing about bipolar disorder until three years ago, and have now learned an awful lot, which I wanted to explore on the page. Also, we have a propensity to repeat the patterns of our childhood; we recreate situations that are somehow familiar to us, and I loved the idea of Grace growing up in a difficult, volatile household, and how this would explain why she would remain married to a man like Ted. Many people reading the book would urge her to leave, but when you understand how walking on eggshells is entirely familiar to Grace, I think it helps you understand why she stays.

You deal with a controversial subject of misdiagnosis and over-prescription of psychoactive medications in SAVING GRACE. What made you decide to explore that issue in the book?

My own journey from initially being diagnosed with ADHD and prescribed stimulants, which then created symptoms of manic depression, for which I was then put on anti-psychotics for a year and a half. I lost a year and a half of my life. When I finally gathered the strength to fight back, I was horrified at what a familiar story this is in America, the over-prescription of medications like this, the handing out of diagnoses on people who are perfectly fine, and the problems these drugs then create.

Grace has to tap into deep wells of strength to overcome some difficult situations that she faces. How much does the theme of finding inner strength play a role in your writing?

I think the primary themes of my novels tend to be how do we find peace; what does happiness look like; does getting what we think we want make us happy... All of my characters end up having to do some soul-searching in order to answer those questions, Grace perhaps more than some of the others. I believe it is the flaws that make us interesting, our backgrounds, the hardships. Whether it's a history of alcoholism or addiction, mental illness, abuse, I have long been interested in how we take the challenges of childhood and build a productive and peaceful life in spite of them.

What do you hope readers take away from SAVING GRACE?

Grace's lessons were ones I had to learn the hard way, primarily that we should always trust our intuition; that when that little voice tells us something is wrong, we must listen to it, and that we have to be our own advocates when it comes to our health - do not ever let a doctor or health professional talk you into something you think is wrong, and inform yourself as much as you can. As a friend of mine who is very high up in the medical industry recently said: if a doctor tells you not to look up the medication on the internet, that's the sign of a bad doctor; go and find someone else.

On Food and Cooking...

How does your love of food and cooking influence your writing?

There's always at least one character who is either a foodie or a cook, and I have included recipes in a couple of the books. I show the people I love that I love them by gathering them in my kitchen and feeding them, so no surprise that most of my characters do the same thing.

Does Grace cook to feed a spiritual or emotional hunger in those around her (or in herself), as well as physical?

I think perhaps we all cook to feed some kind of hunger in ourselves. I am nourished by being surrounded by family and friends, by creating something delicious for them, by nurturing them

It should be easy and painless, but should look and taste as if you have slaved over a hot stove for hours. When my guests arrive, I want to spend time with them, not last-minute sautéing in the kitchen away from all the action. Although, mostly now we are all gathered around the kitchen island anyway, so everyone tends to muck in and help.

You revealed in an Op-Ed piece last summer that you'd been diagnosed with malignant melanoma. What made you decide to go public with your personal health information? And what's the update on your prognosis?

Malignant Melanoma is the fastest-growing cancer in the world, yet one few people take notice of. Breast cancer survival rates are now so much better thanks to people realizing how important regular mammograms are, but few people think about their skin, or understand the importance of having annual check-ups. Malignant Melanoma is the most dangerous of the skin cancers, yet one that can be so easily prevented and treated if caught early enough. If I can help one person, have one person go to get checked who wouldn't otherwise have thought to do so, it has been entirely worthwhile to go public about my story. My own mole was 1mm, with mitosis. I had the wide leg excision surgery, and a lymph node biopsy. Everything came back clear, happily, so I am looking at a future filled with spray tans, and three-monthly check-ups.

How did you make the move from journalist to author?

I left my job as a feature writer on a newspaper to write a book, then sent it off to a number of agents thinking they would all reject me. Within a week most had come back to say they loved what they had read, which then led to a bidding war for my first two novels.

Are your characters ever based on people you know?

Sometimes, but usually only a visual snapshot, or the idea of someone I know. Within a couple of pages the characters have always taken on their own attributes and characteristics, and of course behave in ways the people you thought they were based on would never behave.

Do you often escape to another location, city, or environment to write? What effect does this have on you as the writer and on the stories you create?

A couple of times a year I take myself off to a self-imposed retreat, usually in Vermont, or New Hampshire, sometimes Connecticut or Maine. I remove myself from everything, and write for around ten hours a day, completely immersed in the world of my characters, which lends a propulsive quality the books can't have when I'm writing a few hours a day with life in between.

That writing is your job, and has to be done every day, whether you feel like it or not. That the most important requirement is discipline; that you will be hit with writer's block over and over, and the only way to break it is to keep writing anyway. I would also add, write the story you need to tell rather than the one you think will be a bestseller.

What books are you currently reading? Any book recommendations?

I'm halfway through Us by David Nicholls which I heartily recommend, and adored You Should Have Known by Jean Hanff Korelitz.

What's next for Jane Green fans? What are you currently working on?

Summer Secrets - out in the Summer of 2015, it's about Cat, who discovers at twenty five that her father isn't her father, and that she has a whole other family she knew nothing about on the island of Nantucket. She goes to meet them, but her drinking and partying is out of control, and it all ends in disaster. Years later we revisit Cat, now a single mother, and sober, knowing that the last people to whom she has to make an amends is her Nantucket family. Eventually she can't put it off any longer, and goes back to the island to repair the damage she has wrought, not knowing whether it's too late.

Do you keep a journal that you write in daily or do you prefer to express yourself through your novels?

I haven't kept a journal in years, and definitely use fiction to express myself. Being a writer, and an introvert, means my head is a very busy place to reside - the only way I know to sort through the mass of jumbled thoughts, process my emotions, quiet the squirrels, is to let it all out in my novels.

Do you ever write in books while you are reading? Highlight passages?

Only non-fiction, but I haven't done it in a while. As I have hit middle age I have found that I have no memory retention whatsoever, so while it seems like a good idea to highlight passages that resonate with me, the likelihood is once the book would be back on the bookshelf, I would never think of it again. I do type quotes that particularly move me into the notes section on my iphone, and do refer to that when needed.

Joan Didion famously explained that she writes "entirely to find out what I'm thinking, what I'm looking at, what I see and what it means. What I want and what I fear." Why do you write?

For exactly those reasons. I am enormously disciplined and tend to write every day, but of course weeks can go by when I'm editing, or preparing for book tour, and I'm not doing the actual business of writing. I notice that during those times I am always more frazzled, less calm, a little more anxious. Writing stills my soul.

For more information on Jane Green, and to read about SAVING GRACE, visit her website. You can also find Jane Green on Instagram.