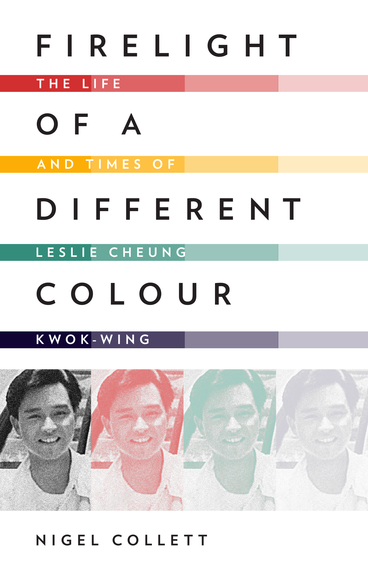 A film and music superstar in his homeland of Hong Kong and throughout Asia, Leslie Cheung broke barriers as an out gay man, finding international success acting in such films as Farewell My Concubine and Happy Together. Acclaim, awards, and fans followed, which made it all the more shocking when, on April 1, 2003, Cheung lept from the 24th floor of a hotel room to his death. Nigel Collett's extraordinarily detailed new biography provides a glimpse into Cheung's path to stardom, his relationships and struggles, and the pitfalls of fame. The author of Firelight of a Different Colour: The Life and Times of Leslie Cheung Kwok-wing, Collett kindly shared more with me about the man ranked as the favorite actor in the 100 years of Chinese cinema and whom CNN called the "Most Beautiful Man from Hong Kong Cinema."

Kergan Edwards-Stout: Like many Americans, Leslie Cheung first appeared on my radar with his starring roles in Farewell My Concubine and Happy Together. You had a similar experience. What is your earliest recollection of him?

Nigel Collett: I watched Farewell My Concubine in '97 and saw him then onscreen for the first time. Alas, I never met him or saw him in the flesh, though I was in Hong Kong the day he died, and drove by the Mandarin Hotel when the mountain of flowers was being gathered on the road side where he fell. As I discovered more about him, I came to see the story as a classic tragedy -- a gay man brave enough to be himself in the brash entertainment world of this city, felled from a uniquely prominent position by a condition beyond his control.

Edwards-Stout: Long before making a splash in the U.S., Cheung was a huge star in Hong Kong and Asia. You write about how, for almost 30 years, he was at the forefront of the Asian art and music scene.

Collett: Leslie overcame a complete absence of education or training to establish himself first as a TV star, then as a film star and singer, by dint of his own talent and irrepressible self-confidence. He was in the forefront of all the major entertainment waves that turned Hong Kong into an independent cultural entity in the '80s and '90s and for many he came to encapsulate the city itself. His appeal was far wider, though, for his films and music reached out to Mainland China, Japan, South Korea, Singapore, Thailand and the great Chinese diaspora across the world. He is probably the biggest Hong Kong star worldwide ever.

Edwards-Stout: Like many struggling actors and singers, Cheung didn't experience fame immediately. He had a great number of steps forward, only to face setbacks. What about his personality was instrumental in moving himself toward success?

Collett: Leslie had huge belief in himself. In his early days, no one thought he could sing, and no one taught him to act. He had huge dedication and patience in getting what he did exactly as he wanted it to be. He was humble enough to learn from other stars and to credit them when he did, but he was never a follower. He was always seeking to take his art to the next level, to be cutting edge. He had no typical role or single type of music. His career was a flowing pattern of development and change.

Edwards-Stout: Cheung was friendly with Danny Chan, a fellow entertainer and Hong Kong star, but eventually their friendship ended. What brought them together, and what drove them apart?

Collett: Leslie and Danny were brought together by a gay star of an earlier generation, the highly flamboyant Roman Tam. They were both gay, both unattached, and though they weren't each other's types, they were looking for fun. They burned the midnight oil together. It was showbiz that broke them apart. Danny's singing career took off first, and he was at the start a classier act on screen. Leslie had to play second fiddle, and didn't enjoy that. It was Danny, though, who caused the breach. He could see Leslie was by far the better actor and resented him. After the breach, there's no sign Danny minded much, but Leslie did.

Edwards-Stout: Cheung first found international recognition through his starring role in John Woo's film, A Better Tomorrow, and later with Farewell My Concubine. How did Cheung deal with this increased level of notoriety?

Collett: Leslie was always conflicted about his fame. Stardom and success was what he sought, but he did not like the shallow lifestyle and perpetual hounding by the media which it brought. He wanted to treat people honestly and live what most would have felt was almost a simple life, but he couldn't. He hated the way the media lied about him and hounded him about his sexual orientation. It drove him to Canada to escape and be himself, but he couldn't shake off the need to achieve, to be a star. It was one of the conflicts, I guess, that came together in the clinical depression which eventually killed him.

Edwards-Stout: You write extensively about Cheung's success in music, with which many Americans may not be familiar...

Collett: Leslie started out wanting only to be a singer, but he couldn't sing. Audiences taunted him with having a 'chicken' thin voice and booed him off stage. It took him years of training and working on his voice before he could turn his belief in his voice into reality. When he did, he found the sweetest, silkiest Cantonese singing voice of his generation. He could be really raucous and loud, too; some of his early numbers were more like western sixties rock than anything of the time, but he got them dancing in the aisles at all his shows.

Edwards-Stout: While initially, in his early days of stardom, Cheung publicly dated women, you detail his life as a gay man. Eventually, he came out as openly gay, which is rare for any celebrity, let alone in his cultural environment. In sketching out Cheung's early days, you note that nothing about his story foretold the fame he would eventually achieve. But what led to his strength in living as an openly gay star?

Collett: I think it was the same huge belief in himself that made him a successful performer and allowed him to come out in public, something no other major Hong Kong star had done and which none would do again till 2013. His coming out was helped by the megastar status he had achieved. Before he reached his pinnacle, he had to be as discreet as most. By the time he was back in Hong Kong in the '90s, he was virtually unassailable. Even them he wrapped himself in a cloud of uncertainty which only gradually dissipated. Many young gay men today accuse him of timidity, but I think that is totally unfair. For his day, he was the bravest man in Hong Kong's entertainment world. At the end of his life, he had given Hong Kong the message that it didn't matter whether you loved a man or a woman, as long as you loved. That was revolutionary back then.

Edwards-Stout: Cheung took a huge leap, starring in the gay-themed Happy Together, which he knew would likely lead to being asked about his sexuality.

Collett: Leslie's acceptance of an openly gay, and in fact a very sluttish, role in Happy Together was, I think, timed deliberately. He was in the process of drawing back the veil about himself. Hong Kong was gradually changing, opening up a little. It was time, he thought, to push the envelope. Wong Kar Wai's art house films were as safe a way to do this as any. He was expected to be outrageous, off beat. In the event, the film had no adverse effect on Leslie or his career at all, rather it helped establish his position as an actor internationally.

Edwards-Stout: Cheung found happiness in his relationship with Daffy Tong, his childhood friend and later lover, who survived him in death. What made their relationship work?

Collett: Daffy was the rock on which Leslie stood. His mercurial talent needed a stable base from which to flourish. Daffy put up with it all, never let him down, never betrayed him, was always there to go back to. More than this, Daffy was a highly talented man, a financial expert who could manage their joint lives and relieve Leslie of all their worries. Daffy, too, was an elegant, very attractive man. They were opposites that made a whole.

Edwards-Stout: Battling depression, Cheung eventually took his own life. In your view, was this a result of years spent living in the closet, mental health issues, career challenges... ?

Collett: There must have been things that sparked off the depression which killed Leslie, but we don't really know what. It had to be something to do with his career, perhaps the attacks he'd received in his last world tour concerts, or his personal life, conflicted thoughts about his mother, maybe. Once it took hold, the depression was both physically and mentally debilitating, humiliating to a man who had always put such store by his abilities, looks and relationship with his public. It destroyed his life to such an extent that it was better to abandon all he loved and die rather than carry on. That point of blackness is inconceivable to anyone who has not gone through such mental pain. The effect of mental illness is still a taboo subject in Hong Kong, and Chinese society generally. Leslie's life will help those families struggling with depression to know it can affect anyone, that it is just a medical condition, and that you have to get help.

Edwards-Stout: In life and death, Cheung has amassed a devoted following of fans. What do they gravitate to, and what legacy has he left them?

Collett: Leslie's fans came to him through their love of his music and his performances on the screen, both large and small, but they stayed with him, and even now, over 11 years after his death, they stay with him because of his warmth, simplicity and humbleness of character. Leslie valued people for who they were, no matter how great or small their place in the world. He was kind, genuine, and generous. He touched each of the fans he came in contact with, and they love him still.

Nigel Collett's Firelight of a Different Colour: The Life and Times of Leslie Cheung Kwok-wing can be found at Amazon and other fine booksellers. Originally posted on KerganEdwards-Stout.com.