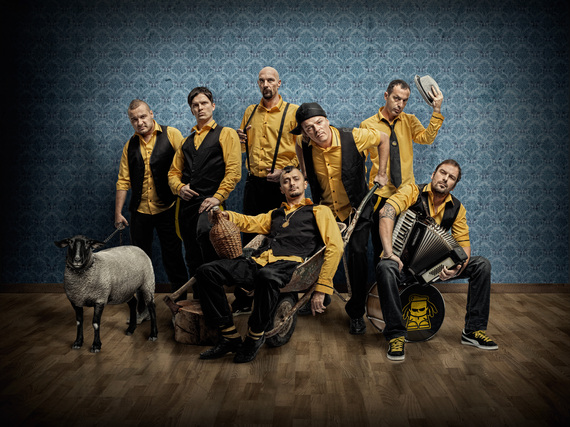 Those who sing of political unrest are not only heard, but felt. Music has a potent way of reaching further and resonating deeper. Using the influence of music, words and imagery, Balkan band Dubioza Kolektiv is creating powerful music with a message. Integrating their perspectives on the current issues facing Europe as well as the rest of the world, their creations are not just entertainment, but also a form of political activism. In their recently produced video, "Free.mp3," they also satirize the music industry through popular and viral videos. In this interview, we discuss their motives, inspirations, charity work, future tour plans and more.

Morena: Your music is so varied, who or what are your inspirations?

DK: Each of us in the band has been influenced by their own favorite bands and this is why it is very difficult to describe our music succinctly. We've never tried to fit it into specific genre niche. Our focus is more on the messages and ideas that we are trying to promote. We are trying to find best musical background for our lyrics and that's why we sound so eclectic in the end. The only constant (element) in our music is that we try to keep an authentic Balkan sound to it, so that you know straight away where we're from when you hear it. People have strong prejudices about the Balkan music and we want to show that music from this region exists outside the usual media stereotypes.

Morena: Dubioza is very active politically, so what would you say are the biggest issues facing Europe at the moment and do those differ from what is happening in Eastern Europe?

DK: It is probably the rise of right-wing populist political parties and, unfortunately, that is not much different from the situation we had at home for the last two decades. The ongoing situation with refugees and migrants from the Middle East and Africa paints a bleak picture of Europe today - Schengen treaty is practically suspended with razor wires on the borders, the wealthiest countries are confiscating jewelry and other valuables from refugees in order to pay for their stay, Brussels' administration is cutting funding for search and rescue missions in the Mediterranean sea while people are drowning and dying every day.

Meanwhile, there is constant hysterical fear-mongering in the mass-media against these people. This is what we mention a lot in our songs. We had a first-hand experience of what the rise of right-wing parties, xenophobia and fascism did to our country during the wars in the '90s and we are trying to warn people not to go in that direction.

Morena: Tell me about "Free.mp3." Obviously this song points to your support of outlets like The Pirate Bay, are you concerned about how musicians will make money in the future with diminishing album sales?

DK: We simply ask some hard questions. The model of ownership and copyrights that traditional music industry supports is outdated and it doesn't function today, so it has to be redefined. There are alternative models and more and more bands and artists embrace these new realities and they are trying to find out how to work under the new circumstances. For example, if someone likes a band, they can find other ways to show their support - to go to a concert, buy merchandise, send Bitcoins.

One of the founders of The Pirate Bay, Peter Sunde, recently made an excellent project called "Kopimashin" - a small computer that is copying the same song over and over again, generating millions of dollars of "damages" as defined by the music industry. It clearly shows how the entire story is absurd. This virtual loss of non-existing wealth is not a valid reason to send people to jail.

Morena: The video for "Free.mp3" is very impressive, who did the special effects and have you had any legal warnings from the people you've included in the clip?

DK: Production company Fabrika and Toni Huml worked on this video. They worked on it for six months, from the moment we wrote the script until the video came out of post-production but it was worth waiting for it and we are very happy with the final result. We didn't know what to expect regarding legal aspects of using parts of other people's videos but, legally, as long as you are using those as a parody, it should be considered a fair use. We didn't receive any formal complaints so far.

Morena: What is the band's touring like for 2016? Any plans on visiting North America?

DK: This year will be very busy for us. We will be touring around Europe, promoting our new album Happy Machine that is due to be released on 5th of February and, yes, we are preparing for our first U.S. tour! And we are very much looking forward to it! We have a show confirmed at the SXSW and this will be our premiere concert in the United States, followed with several others across U.S. And then we are off to Canada as well for the first time.

Morena: What have been some of your most memorable live performances?

Morena: Are you currently working on any projects?

DK: We have a somewhat schizophrenic career with albums written in Bosnian that are intended for the Balkan region but also albums that we do in English, Spanish and other languages for the rest of the world. That's why our creative process never stops. When we finish one album we switch to other languages and continue with new songs. We have a DIY approach to work so we produce and record music, create visuals and large part of video materials by ourselves, take care of our web and social media presence. So answer to this question is: we are working on everything right now.

For more on Dubioza Kolektiv: