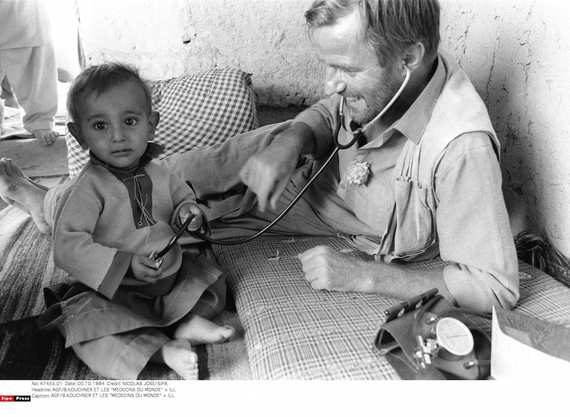 Elena Cué: Did you achieve more for human rights using your political platform or through your humanitarian work? Bernard Kouchner: I think that it's very complex to balance any inference of so-called political things. Human rights are political, and it will take years and years to explain to the people that the solution to the massacres is not hanging people or firing guns. There is no future for ISIS. Meanwhile there's a sort of inside terror, and if you're accepting terror, can you survive? At the beginning, yes, but after time you cannot. There is also no future for that. I'm in favour of human rights; I'm in favor of having respect for human life. I agree that religion as a peace process can work, but religion as a fight against the other religion, no. So we invented the right to intervene as a sort of medical dommage, but also as a political dommage. Medical passports were necessary to access the people at risk, to access the victims. Was it enough? No. But without a political vision it was impossible to force the door. Medical sensibility was affected by human rights; medical access was additional. Was it a political angle? Yes. Was it clearly political? No! This is impossible. Is it political dommage to save the people in the sea? No! This is a human dommage. And the right to interfere was a human intervention, for human victims. It's not perfect, but it's better than before.

E.C: You could be described as similar to the Dr. Schweitzer, the Doctor who attended to the sick in Africa and received the Nobel Peace Prize in 1952. His motivations were to give back everything he received whilst he could. Is this your case? What are your motivations? Or perhaps you would describe yourself as "life-affirming" and a person who spreads vital values. B.K: Well, what a coincidence! I was writing a book on Schweitzer, he is a very interesting guy -- the pioneer of this human access. Not for the same reasons that we had, he was a religious man. He was a protestant and a medical doctor. I'd say yes, he was one of our examples, and a good example. Of course at the same time it was before the discovery of antibiotics, and a lot people were angry because he didn't use modern medicine. But at the same time it was good, he used the cultural methods of the people in Gabon. Of course, I visited his office in Lambaréné and sat at his table and I had a lot of admiration. My book on him is not finished, but Schweitzer gave us a good example for the time, and the time was a colonial time.

E. C: But what about your motivations?

B.K: My motivations are of course similar, but it was after the Second World War and after the Holocaust. And as I told you, nobody reacted against the Holocaust. When I was in Biafra, during the Nigerian-Biafran War, I saw the people coming to our hospital by the hundreds and hundreds. The bombing was targeting the civilian population. There was a blockade, so starvation was killing the babies in the thousands. So we were doctors, we had to react and protest, which we did and created Doctors Without Borders -- just a few of us. I have to name my co-founder who was Max Recamier, he was not a political guy at all. He was a man of faith, he was a Catholic. But he was a doctor, so we did it together. It was more or less the same motivation but for me, it was more that my grandparents died in Auschwitz. And nobody protested. It was another time, but Schweitzer was a good example, not the perfect example -- because there is no perfect example.

E.C: Do you think there is a solution to the Israeli conflict?

So, on the other side, Mahmoud Abbas is an old man now. The new generation really want a Palestinian state, they are recognising Israeli people. Not only that, but they are meeting with them every day. This is ridiculous -- it is a big, big crime not to recognize a Palestinian state. I know the story of Israel, yes they have the right to live, the right to be protected. This is my solution, that's all. At the same time it is very difficult to understand the American political attitude to this. But President Obama wants to sign a document with Iran. I cannot be against peace; it is better than war. Let us see. For Israel it is a danger if Iran is following the line of setting up a nuclear weapon. I think to sign -- if it is signed -- at the end of the month, or at the beginning of July, I think that will be progress. Gaza was unacceptable, it did not change anything for some thousands of days of alienation. I know Hamas is not for peace, but I know that PLO is for peace. Let's side with PLO!

E.C: What did you think about the position of Netanyahu?

E.C: You've just arrived from Ukraine. What were you doing there?

B.K: I don't know if I will do it, but I was in charge of offering a plan for changing the health system completely in Ukraine, like it was in Soviet Union and in Russia - a statist plan. I think we should mix public and private involvement under certain laws and under private health insurance, under public supervision. We'll see, but there is a problem with Mr. Putin, who was not responsible for the separation between Russia and Ukraine, that was Gorbachev and Yeltsin. So we have to respect the border, and even if Russia is a bit different, the way they took over in fighting and bombing, remember, not only were they fighting but they missiled a Malaysian plane with Dutch people on board. It is not acceptable. I don't know, we have a problem, and the solution is not war against Russia, certainly not. So is it sanctioning - economical sanctions? Partly, yes. And talk and talk, as we used to say, diplomacy.

E.C: Could you tell me more about how Doctors Without Borders originated?

B.K: We were coming, young European doctors. French doctors. That's why we went, we were French doctors and we were coming from a rich country; a country where we had been highly educated and we were had diplomas and we were working in hospitals, good hospitals, in France. And we discovered what? The reality of the world. And we discovered that our education was unable then to tell us what we have to do...what we had to do. What was our behaviour? We discovered that there were people dying of starvation, they were dying of misery. Of course they were also dying from bombs. We discovered a word: bomb. They were bombing the villagers, they were machine gunning all the highways, and they targeted the children. Every day there were violations of human rights, of course it was a civil war. So what were we supposed to do? To take care of the victims. OK, we took care of the victims from the bombing.